British Americans are Americans whose ancestry originates wholly or partly in the United Kingdom (England, Wales, Scotland and Northern Ireland). People seldom use the term to describe themselves (1,172,050 chose it in the 2009 American Community Survey); it is primarily a demographic or historical research category.

According to American Community Survey in 2009, Americans reporting British ancestry are 40,234,652, or 13.0% of the total U.S. population, a significant drop from the 1980 United States Census where 49,598,035 reported as having English ancestry and 61,311,449 reported as having British ancestry.[2] Using the self reported 2010 census figures British Americans are the second largest European ancestry group after German Americans. However, this figure is likely a serious undercount, as a large proportion of Americans of British descent have a tendency (since the introduction of a new 'American' category in the 2000 census) to identify as simply Americans[4][5][6][7] Eight out of the ten most common surnames in the United States are of British origin.[8] 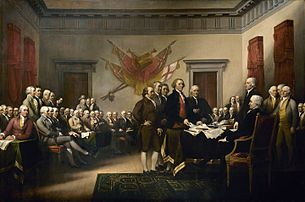 Declaration of independence. Most of the Founding Fathers had British ancestors.

The ancestry of the 3,929,214 population in 1790 has been estimated by various sources by sampling last names in the very first United States official census and assigning them a country of origin.[11] The estimate results indicate that people of British ancestry made up about 62% of the total population or 74% of the European American population. Some 81% of the total United States population was of European heritage.[12] Around 757,208 were of African descent with 697,624 being slaves. Of the remaining population, more than 75% was of British origin.[13]

These include: In 1980, the total census reported that British ancestry was (32.56%) of the total U.S population. Triple ancestry response:English-Irish-Scotch: 897,316 There are no concrete figures for the Scots-Irish and some group responses were under-counted, but in 1980, 29,828,349 people claimed Irish and another ethnic ancestry. These figures make British Americans the largest "ethnic" group in the U.S. and would have naturally increased in population with more people of British origin than in 1980. This is true when counted collectively (the Census Bureau does give the choice to count them collectively as one ancestry, and also count them in a separate ethnic group, that is English, Scottish, Welsh or Scots-Irish). In 2000, Germans and Irish were the largest self-reported ethnic groups in the nation.

Most of the population who stated their ancestry as "American" are said to be of old colonial British stock.

Following are the top 10 highest percentages of people of English, Scottish and Welsh ancestry, in U.S. communities with 500 or more total inhabitants (for the total list of the 101 communities, see the reference):[17][18][19] 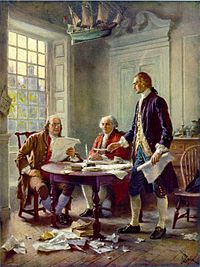 Benjamin Franklin, John Adams and Thomas Jefferson writing the Declaration of independence (1776) were all of British descent.
File:The Great Rapprochement.jpg
The National personification of the United States and Great Britain. Uncle Sam embracing John Bull, while Britannia and Columbia hold hands and sit together in the background (1898).

The British diaspora consists of the scattering of British people and their descendants who emigrated from the United Kingdom. The diaspora is concentrated in countries that had mass migration such as the United States and that are part of the Anglosphere. A 2006 publication from the Institute for Public Policy Research estimated 5.6 million British-born people lived outside of the United Kingdom.[20][21]

After the Age of Discovery the British were one of the earliest and largest communities to emigrate out of Europe, and the British Empire's expansion during the first half of the 19th century saw an "extraordinary dispersion of the British people", with particular concentrations "in Australasia and North America".[22]

The British Empire was "built on waves of migration overseas by British people",[23] who left the United Kingdom and "reached across the globe and permanently affected population structures in three continents".[22] As a result of the British colonization of the Americas, what became the United States was "easily the greatest single destination of emigrant British".[22]

Historically in the 1790 United States Census estimate and presently in Australia, Canada and New Zealand "people of British origin came to constitute the majority of the population" contributing to these states becoming integral to the Anglosphere.[23]

An English presence in North America began with the Roanoke Colony and Colony of Virginia in the late-16th century, but the first successful English settlement was established in 1607, on the James River at Jamestown. By the 1610s an estimated 1,300 English people had travelled to North America, the "first of many millions from the British Isles".[24] In 1620 the Pilgrims established the English imperial venture of Plymouth Colony, beginning "a remarkable acceleration of permanent emigration from England" with over 60% of trans-Atlantic English migrants settling in the New England Colonies.[24] During the 17th century an estimated 350,000 English and Welsh migrants arrived in North America, which in the century after the Acts of Union 1707 was surpassed in rate and number by Scottish and Irish migrants.[25]

The British policy of salutary neglect for its North American colonies intended to minimize trade restrictions as a way of ensuring they stayed loyal to British interests.[26] This permitted the development of the American Dream, a cultural spirit distinct from that of its European founders.[26] The Thirteen Colonies of British America began an armed rebellion against British rule in 1775 when they rejected the right of the Parliament of Great Britain to govern them without representation; they proclaimed their independence in 1776, and subsequently constituted the first thirteen states of the United States of America, which became a sovereign state in 1781 with the ratification of the Articles of Confederation. The 1783 Treaty of Paris represented Great Britain's formal acknowledgement of the United States' sovereignty at the end of the American Revolutionary War.[27]

Nevertheless, longstanding cultural and historical ties have, in more modern times, resulted in the Special Relationship, the exceptionally close political, diplomatic and military co-operation of United Kingdom – United States relations.[28] Linda Colley, a professor of history at Princeton University and specialist in Britishness, suggested that because of their colonial influence on the United States, the British find Americans a "mysterious and paradoxical people, physically distant but culturally close, engagingly similar yet irritatingly different".[29]

Grand Union Flag was first flown on December 2, 1775. The current flag has fifty stars on the flag represent the 50 states and the 13 stripes represent the original British thirteen colonies.
Main article: American flag

Harvard was founded by Englishmen who sought to reproduce the environment of academic excellence they experienced at Cambridge University, England where many of the founders of New England has been educated.

Yale University was founded by Englishmen who considered Harvard too liberal for the education of New England gentlemen.

The Declaration of Independence is a creation of British Americans.

The Constitution of the United States is a creation of British Americans.

The American Bill of Rights is a creation of British Americans.

The American system of government: a Constitutional Republic with a separation of executive, legislative, and judicial powers is a creation of British Americans.

Most American Presidents, Senators, and Congressman, Governors and Ivy League University Presidents have been British Americans.

The Grand Union Flag is considered to be the first national flag of the United States[citation needed]. This flag consisted of 13 red and white stripes with the British Union Flag of the time (before the inclusion of St. Patrick's cross of Ireland) in the canton. The flag was first flown on December 2, 1775 by John Paul Jones (then a Continental Navy lieutenant) on the ship Alfred in Philadelphia).[30] The Alfred flag has been credited to Margaret Manny.[31] It was used by the American Continental forces as a naval ensign and garrison flag in 1776 and early 1777. It is widely believed that the flag was raised by George Washington's army on New Year's Day 1776 at Prospect Hill in Charlestown (now part of Somerville), near his headquarters at Cambridge, Massachusetts, and that the flag was interpreted by British observers as a sign of surrender.[32] Some scholars dispute this traditional account, concluding that the flag raised at Prospect Hill was likely a British union flag.[33]

The aristocratic American Republic from the founding of the United States through 1820 was a British American invention.

Place names in the United States 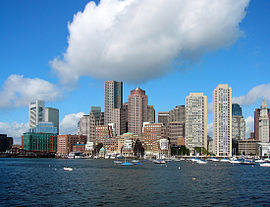 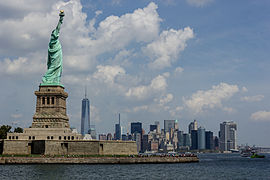 There are many places in the United States named after places in Great Britain as a result of the many British settlers and explorers. These include the region of New England and the some of the following:

In addition, some places were named after the English royal family. The name Virginia was first applied by Queen Elizabeth I (the "Virgin Queen") and Sir Walter Raleigh in 1584.,[40] the Carolinas were named after King Charles I and Maryland named so for his wife, Queen Henrietta Maria (Queen Mary).[41]