The British Film Institute (BFI) is a charitable organisation established by Royal Charter to:

The BFI maintains the world's largest film archive, the BFI National Archive, previously called National Film Library (1935–1955), National Film Archive (1955–1992) and National Film and Television Archive (1993–2006). The archive contains more than 50,000 fiction films, over 100,000 non-fiction titles and around 625,000 television programmes. The majority of the collection is British material but it also features internationally significant holdings from around the world. The Archive also collects films which feature key British actors and the work of British directors. 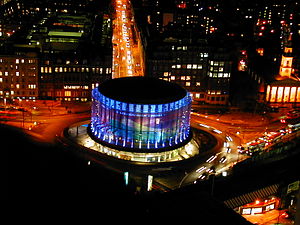 The BFI runs the BFI Southbank (formerly the National Film Theatre (NFT)) and London IMAX cinema, both located on the south bank of the River Thames in London. The IMAX has the largest cinema screen in the UK, and shows popular recent releases and short films showcasing its technology, which includes 3D screenings and 11,600 watts of digital surround sound.[2] BFI Southbank (the National Film Theatre screens and the Studio) shows films from all over the world particularly critically acclaimed historical & specialised films that may not otherwise get a cinema showing. The BFI also distributes archival and cultural cinema to other venues – each year to more than 800 venues all across the UK, as well as to a substantial number of overseas venues.

The BFI offers a range of education initiatives, in particular to support the teaching of film and media studies in schools.[3] In late 2012, the BFI received money from the Department For Education to create the BFI Film Academy Network.[4] [5][6]

The BFI publishes the monthly Sight & Sound magazine as well as films on Blu-ray, DVD and books. It runs the BFI National Library, a reference library, and maintains the SIFT (Summary of Information on Film and Television) database, which contains credits, synopses and other data on global film and TV. It also has a substantial collection of around 7 million film and TV stills.

The BFI has co-produced a number of television series featuring footage from the BFI National Archive, in partnership with the BBC:

The institute was founded in 1933. Despite its foundation resulting from a recommendation in a report on Film in National Life, at that time the institute was a private company, though it has received public money throughout its history—from the Privy Council and Treasury until 1965 and the various culture departments since then.

The institute was restructured following the Radcliffe Report of 1948 which recommended that it should concentrate on developing the appreciation of filmic art, rather than creating film itself. Thus control of educational film production passed to the National Committee for Visual Aids in Education and the British Film Academy assumed control for promoting production. From 1952-2000, the BFI provided funding for new and experimental filmmakers via the BFI Production Board.

The institute received a Royal Charter in 1983. This was updated in 2000, and in the same year the newly established UK Film Council took responsibility for providing the BFI's annual grant-in-aid (government subsidy). As an independent registered charity, the BFI is regulated by the Charity Commission and the Privy Council.

In 1988, the BFI opened the London Museum of the Moving Image (MOMI) on the South Bank. MOMI was acclaimed internationally and set new standards for education through entertainment, but subsequently it did not receive the high levels of continuing investment that might have enabled it to keep pace with technological developments and ever-rising audience expectations. The Museum was "temporarily" closed in 1999 when the BFI stated that it would be re-sited. This did not happen, and MOMI's closure became permanent in 2002 when it was decided to redevelop the South Bank site. This redevelopment was itself then further delayed.

The BFI is currently managed on a day-to-day basis by its chief executive, Amanda Nevill. Supreme decision-making authority rests with a chair and a board of up to 14 governors. The current chair is Greg Dyke, who took office on 1 March 2008. He succeeded the late Anthony Minghella (film director), who was chair from 2003 until 31 December 2007. The chair of the board is appointed by the BFI's own Board of Governors but requires the consent of the Secretary of State for Culture, Media and Sport. Other Governors are co-opted by existing board members when required (but if one of these is appointed Deputy Chair, that appointment is subject to ratification by the Secretary of State).[citation needed]

The BFI operates with three sources of income. The largest is public money allocated by the Department for Culture, Media and Sport. In 2011–12, this funding amounted to approximately £20m.[citation needed] The second largest source is commercial activity such as receipts from ticket sales at BFI Southbank or the BFI London IMAX theatre (£5m in 2007), sales of DVDs, etc. Thirdly, grants and sponsorship of around £5m are obtained from various sources, including National Lottery funding grants, private sponsors and through donations (J. Paul Getty, Jr. donated around £1m in his will following his death in 2003). The BFI is also the distributor for all Lottery funds for film (in 2011–12 this amounted to c.£25m).[citation needed]

As well as its work on film, the BFI also devotes a large amount of its time to the preservation and study of British television programming and its history. In 2000, it published a high-profile list of the 100 Greatest British Television Programmes, as voted for by a range of industry figures.[citation needed]

The delayed redevelopment of the National Film Theatre finally took place in 2007, creating in the rebranded "BFI Southbank" new education spaces, a gallery, and a pioneering mediatheque which for the first time enabled the public to gain access, free of charge, to some of the otherwise inaccessible treasures in the National Film & Television Archive. The mediatheque has proved to be the most successful element of this redevelopment, and there are plans to roll out a network of them across the UK.[citation needed]

An announcement of a £25 million capital investment in the Strategy for UK Screen Heritage was made by Secretary of State for Culture Media and Sport at the opening night of the 2007 London Film Festival. The bulk of this money paid for long overdue development of the BFI National Archive facilities in Hertfordshire and Warwickshire.[citation needed]

During 2009 the UK Film Council persuaded the government that there should only be one main public-funded body for film, and that body should be the UKFC while the BFI should be abolished. During 2010 the government announced that there would be a single body for film. Despite intensive lobbying (including controversially using public funding to pay public relations agencies to put its case) the UKFC failed to persuade the government that it should have that role and, instead, the BFI took over most of the UKFC's functions and funding from 1 April 2011, and the UKFC was subsequently abolished. Since then, the BFI has been responsible for all Lottery funding for film—originally in excess of £25m p.a., and currently in excess of £40m p.a.[citation needed] Between 2009-2013 the BFI backed 141 films, 8.3% of all feature films made in the UK during that period.[7]

The BFI Film Academy forms part of the BFI’s overall 5-19 Education Scheme. The programme is being supported by the Department for Education in England who have committed £1m per annum funding from April 2012 and 31 March 2015. It is also funded through the National Lottery, Creative Scotland and Northern Ireland Screen

Chairmen of the BFI's Board of Governors