The British Formula Ford Championship was an entry level single seater motor sport category, designed to give racing drivers their first step into car racing after karting. Drivers from across the world were attracted to the United Kingdom to compete in the series, and successful Formula One drivers such as Ayrton Senna and Jenson Button won their first single-seater titles in the championship. The championship was run to various Formula Ford regulations over the years, based on the engines provided for the championship by Ford Motor Company. These engine based regulations/specifications include the Ford Kent engine, Ford Zetec engine, Ford Duratec engine and in the final years the Ford EcoBoost engine.

From the 2015 season onwards, the championship will be replaced by MSA Formula, which conforms to the FIA's new Formula 4 regulations. Many of the teams and drivers which competed in the final season of British Formula Ford will move to the new series. 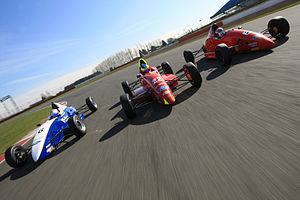 The championship started out with the 1600cc Ford Kent engine and continued to use it until Ford introduced its newer, more powerful 1800cc Ford Zetec engine. Although this engine change didn't affect the other technical regulations, which still called for steel space frames which were much more economical to build and run compared to their carbon fiber counterparts, the increased engine power accelerated chassis development, causing many of the smaller manufacturers stopped producing cars, resulting in fewer constructors represented in the championship.[2] The Zetec regulations lasted only 12 years up until the Ford Duratec engine was introduced in 2006, providing better handling and power due to its lighter weight even though the specification had returned to 1600cc engines.[1]

The biggest changes to the championship came in 2012 when the latest Ford EcoBoost engine and specification was adopted as the main championship. The EcoBoost car marks a substantial change in the direction of Formula Ford racing as it introduces both smaller capacity Turbocharged petrol engines and for the first time a sequential gearbox.[2] 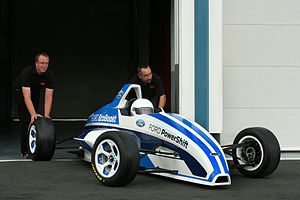 The championship currently allows two specification of Formula Ford car to race: the current generation EcoBoost car and the previous generation Duratec car. The championship is multi-chassis, featuring manufacturers such as Van Diemen and Mygale. To help keep costs low, cars are made from steel, as opposed to the more exotic carbon fibre commonly found in higher categories of racing. The Duratec cars were introduced in 2006, when all the cars in the series were required to use the 1600cc Naturally aspirated Ford Duratec engine which replaced the Ford Kent engine that had been used since the championships inception. Beginning in 2012, the EcoBoost class was introduced to run as the premier class alongside a secondary class for the aging Duratec cars. The EcoBoost class utilises Ford's latest EcoBoost engine which provides greater power thanks to the introduction of a Turbo Charger. The chassis however remains a steel space frame rather than the carbon fibre Monocoque found in other formulae.[3]

From 2015 onwards, the MSA Formula will use Formula 4 regulations. Mygale will continue to provide the carbon-fibre monocoque chassis (As opposed to the Tatuus supplied chassis used in BRDC F4. The engine will be a Ford 1.6L EcoBoost engine as used in the more modern Formula Ford cars, tuned to a maximum of 160 PS. All engines will be tuned by the same race engine preparer, in an attempt to reduce costs. Similarly, all tyres will be provided by Hankook. Sadev will provide the sequential paddle shift transmission and data logging system.

From 2013, the championship is composed of 30 rounds held at ten events in support of the British Touring Car Championship.[4] Both EcoBoost and Duratec classes compete in the same races as each other. Drivers who have competed in less than 4 junior formula races in the past are eligible to compete for the Rookie Cup, whilst both Teams and Constructors have separate championships for themselves. The Nations Cup is awarded to the highest placed registered driver from each country excluding UK.[3] In 2015, the series will again run 30 rounds at ten events in support of the BTCC, despite becoming the MSA Formula.

Points are awarded to all finishing drivers in each race as well as the driver setting the fastest lap using the following system: 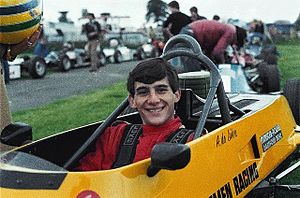 Such was the popularity of the formula in the UK over its history; there is an abundance of second hand chassis from previous generations of the championship. This has led to the formation of several other national and club level championships within the UK catering for legacy chassis, engines and cars.

The Formula Ford Festival is an annual meeting of Ford powered single seat racing cars which is held at the end of the British racing season, at the Brands Hatch motor racing circuit in the county of Kent, in Southern England. The events are held over the course of a weekend and although various classes of past and present Formula Fords are present, the high point for many is the championship in which young but skilled drivers from Ford competitions in Europe and beyond race against one another. Often it is a rare chance to compare the skills of drivers who take part in different Ford competitions across the world. The event is administered by the British Racing and Sports Car Club.