The Royal British Legion (RBL), sometimes referred to as the The British Legion or The Legion, is a British charity providing financial, social and emotional support to members and veterans of the British Armed Forces, their families and dependants.

Service in the military is no longer a requirement of Legion membership.[1] The Legion has an official membership magazine, Legion, which is free to all Legion members as part of their annual subscription.[2]

The British Legion was founded in 1921 as a voice for the ex-service community as a merger of four organisations: the Comrades of the Great War, the National Association of Discharged Sailors and Soldiers, the National Federation of Discharged and Demobilized Sailors and Soldiers and the Officers' Association. It was granted a Royal Charter on 29 May 1971 to mark its fiftieth anniversary which gives the Legion the privilege of the prefix 'Royal'.[3]

Earl Haig, British commander at the Battle of the Somme and Passchendaele was one of the founders of the Legion and the President until his death.

The head office is based (2015) next to Borough tube station.

Perhaps best known for the yearly Poppy Appeal and Remembrance services, the Legion is a campaigning organisation that promotes the welfare and interests of current and former members of the British Armed Forces.

The Legion holds a fund-raising drive each year in the weeks before Remembrance Sunday, during which artificial Remembrance poppy red poppies, meant to be worn on clothing, are offered to the public in return for a donation to the Legion. The Poppy is the trademark of The Royal British Legion, RBL states "The red poppy is our registered mark and its only lawful use is to raise funds for the Poppy Appeal".[4] The paper poppies are manufactured at the Poppy Factory in Richmond. Other products bearing the Poppy, the Trademark of The Royal British Legion[5][6][7] are sold throughout the year as part of the ongoing fundraising.[8] 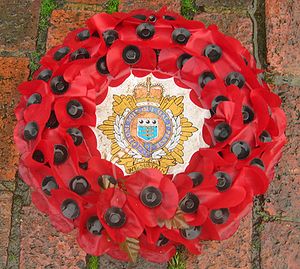 A wreath of artificial poppies used on Remembrance Day

The Legion organises 'The Festival of Remembrance' in Royal Albert Hall, London on the Saturday before 'Remembrance Sunday'. Originally featuring composer John Foulds's World Requiem it now includes military displays by current members of the armed forces, choral works, and prayers. The festival is awash with the finest of British pomp and pageantry.[9] It culminates with Servicemen and Women, with representatives from youth uniformed organizations and uniformed public security services of the City of London, parading down the aisles and onto the floor of the hall. There is a release of poppy petals from the roof of the hall.

On the day there are two performances. The matinee is open to any member of the public. The evening event is open only to members of the Legion and their families, and is attended by senior members of the Royal Family; starting and ending with the British National Anthem, God Save The Queen, and includes the three cheers led by the Garrison Sergeant Major at the finale. In 2007, the second half of the evening event was aired live on BBC Radio 2. BBC One showed the event an hour later.[10]

Most parts of the Festival are of a formal, thought-provoking, and solemn nature. In recent years, lighter sketches have been included, for example depicting civilian life during wartime, in an attempt to attract viewers from generations born after the Second World War.[citation needed]

Musical accompaniment for the event is provided by a military band from the Household Division together with The Countess of Wessex's String Orchestra, joined by the bands of the Royal Air Force (via the RAF Music Services) and representatives of the Royal Marines Band Service.

Honour the Covenant is a campaign launched by The Royal British Legion in September 2007, which calls on the UK Government to honour the Military Covenant. The campaign aims to seek public support for the issues identified by the Legion and to encourage their Members of Parliament to act to ensure that Government policy is changed.

The campaign accuses the Government of failing to meet its commitments under the Covenant. The Legion highlighted the case of a 23-year-old paratrooper, injured in battle, who was awarded £152,150 despite injuries requiring care for the rest of his life. It also criticised the practice of treating soldiers in wards alongside civilian patients.[11] In his conference speech that October, Conservative Party leader David Cameron referred to the Covenant and said "Mr. Brown, I believe your government has broken it."[12]

Responding to the Royal British Legion's campaign, the former Secretary of State for Health Alan Johnson announced in November 2007 that armed forces veterans would get priority treatment on the National Health Service, and those injured would be treated immediately in hospital rather than go through waiting lists. Prescription charges would also be waived.[13]

In upholding the claim of six Gurkha soldiers for the right to settle in Britain at the end of their service, Mr Justice Blake's judgement in September 2008 recited the Military Covenant before observing that granting them residence in Britain "would, in my judgment, be a vindication and an enhancement of this covenant".[14]

The Legion sponsors a website, CivvyStreet.org, which assists Service leavers and members of the ex-Service community and their dependents with information, advice and guidance (IAG) on resettlement, learning and work. Specialist services are provided by partner organisations. Opportunities for funding may also be available to those who qualify for assistance. The website has been designed to give a single gateway to the services and support that partners provide for resettlement, learning and work.[15]

In September 2009, the Legion accepted a donation from Rachel Firth, a member of the British National Party (BNP). She raised money by spending 24 hours in a cardboard box, giving half to the BNP and half to the Legion. Initially, the donation was rejected, but, after Firth gave an assurance that its giving would not be "exploited politically", it was accepted.[16]

In August 2010, Tony Blair pledged the proceeds of his memoirs, A Journey, to the Legion, "as a way of marking the enormous sacrifice [the armed forces] make for the security of our people and the world". This included a £4.6 million advance, making it the largest single donation in the charity's history. Chris Simpkins, the Legion's Director General, said he was delighted with what he called "this very generous" offer and the Legion announced that it would be used to help fund its planned "Battle Back" challenge, a project to provide state-of-the-art rehabilitation services for troops returning from the frontline with serious injuries. Amongst the mixed reaction to the news, some anti war campaigners and families of soldiers killed during the wars in Iraq and in Afghanistan claimed the donation was “blood money” and a public relations stunt.[17][18][19]

In 2015, the administration office announced that the practice of subscriptions being paid informally within clubs by cash would cease, and that in future all subscriptions would need to be paid either via online payment, direct debit, cheque or in cash at PayPoint.[20] In North Wales this prompted a number of associated clubs to leave the Legion, including Colwyn Bay and Conwy, with others voting on also doing so.[21]

There are over 50 Legion bands around the world, each run and funded independently. They include full concert show bands, brass ensembles, pipe and drum bands, marching bands and youth bands. 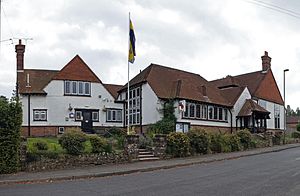 The Royal British Legion Riders Branch (RBLR) is a specialist UK-wide branch of The Royal British Legion for motorcyclists. Its members hold events such as Weston Bike Night in Weston-super-Mare and rallies such as the RBLR 1000,[23] a 1,000 mile in 24 hours sponsored ride, all to raise money for the Poppy Appeal. Many RBLR members attended the repatriation ceremonies in Royal Wootton Bassett.[24][25][26] Ex-services members of the RBLR often wear medals and head-dress with their leathers and motorcycle kit.