Designed by Sydney Smirke and opened in 1857, the Reading Room was in continual use until its temporary closure for renovation in 1997. It was reopened in 2000, and from 2007 to 2014 it was used to stage temporary exhibitions. It has since been closed while its future use remains under discussion. 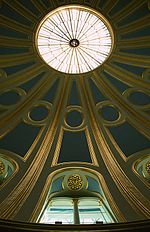 Detail of the ceiling with its oculus 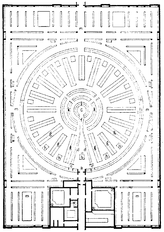 A plan of the desks and book storage in the room

In the early 1850s the museum library was in need of a larger reading room and the then-Keeper of Printed Books, Antonio Panizzi, following an earlier competition idea by William Hosking, came up with the thought of a round room in the central courtyard. The building was designed by Sydney Smirke and was constructed between 1854 and 1857. The building used cast iron, concrete, glass and the latest technology in ventilation and heating. The dome, inspired by the Pantheon in Rome, has a diameter of 42.6 metres but is not technically free standing: constructed in segments on cast iron, the ceiling is suspended and made out of papier-mâché. Book stacks built around the reading room were made of iron to take the huge weight and add fire protection. There were forty kilometres of shelving in the stacks prior to the library's relocation to the new site.[1]

The Reading Room was officially opened on 2 May 1857 with a 'breakfast' (that included champagne & ice cream) laid out on the catalogue desks. A public viewing was held between 8 and 16 May which attracted over 62,000 visitors. Tickets to it included a plan of the library.[1][2]

Regular users had to apply in writing and be issued a reader's ticket by the Principal Librarian.[1] During the period of the British Library, access was restricted to registered researchers only; however, reader's credentials were generally available to anyone who could show that they were a serious researcher. The Reading Room was used by a large number of famous figures, including notably Sun Yat-sen, Karl Marx, Oscar Wilde, Friedrich Hayek, Bram Stoker, Mahatma Gandhi, Rudyard Kipling, George Orwell, George Bernard Shaw, Mark Twain, Vladimir Lenin (using the name Jacob Richter[1]), Virginia Woolf, Arthur Rimbaud, Mohammad Ali Jinnah,[3] H. G. Wells[4] and Sir Arthur Conan Doyle.[1] 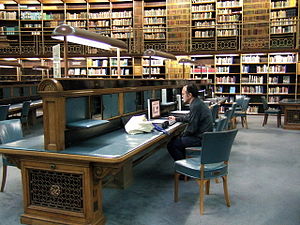 In 1997 the British Library moved to its own specially constructed building next to St Pancras Station and all the books and shelving were removed. As part of the redevelopment of the Great Court, the Reading Room was fully renovated and restored, including the papier-mâché ceiling which was repaired to its original colour scheme, having previously undergone radical redecorations (the initial design of the roof was considered excessive at the time).[1][5]

The Reading Room was reopened in 2000, allowing all visitors, and not just library ticket-holders, to enter it. It held a collection of 25,000 books focusing on the cultures represented in the museum along with an information centre and the Walter and Leonore Annenberg Centre.[1]

In 2007 the books and facilities installed in 2000 were removed, and the Reading Room was relaunched as a venue for special exhibitions, beginning with one featuring China’s Terracotta Army. The general library for visitors (Paul Hamlyn Library) moved to a room accessible through nearby Room 2, but closed permanently on 13 August 2011. This is an earlier library that has also had distinguished users, including Thomas Babington Macaulay, William Thackeray, Robert Browning, Giuseppe Mazzini, Charles Darwin and Charles Dickens.[6] 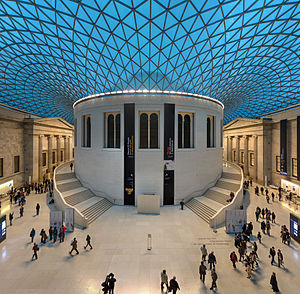 The exterior of the Reading Room, in the Great Court

In 2014, the British Museum opened its new World Conservation and Exhibitions Centre that included a specially constructed exhibition space. The museum has been consulting on the future of the Reading Room, but as of June 2014, its future is still undecided.

References in art and popular culture

Alfred Hitchcock used the Reading Room and the dome of the British Museum as a location for the climax of his first sound film Blackmail (1929). Other movies with key scenes in the Reading Room include Night of the Demon (1957) and in the 2001 Japanese anime OVA Read or Die, the Reading Room is used as the secret entrance to the British Library's fictional "Special Operations Division".

Probably the first work of fiction in which the British Museum Reading Room plays an important part as a setting is New Grub Street by George Gissing, published in 1891.

In the short story "Enoch Soames", first published in May 1916, an obscure writer makes a deal with the Devil to visit the Reading Room one hundred years in the future, in order to know what posterity thinks about him and his work.

The British Museum and the Reading Room serve as the settings for An Encounter at the Museum, an anthology of romance novellas by Claudia Dain, Michelle Marcos, Deb Marlowe, and Ava Stone.

Virginia Woolf made reference to the British Museum Reading Room in a passage from her 1929 essay, A Room of One's Own. She wrote, "The swing doors swung open, and there one stood under the vast dome, as if one were a thought in the huge bald forehead which is so splendidly encircled by a band of famous names." [10]

Richard Henry Dana, Jr. visited the Reading Room on 10 September 1860 with his London friend Henry T. Parker, and reported that "Parker calls & takes me to the British Museum, to see the Reading Room, wh. has been built since 1856 [Dana's prior visit]. It is the room where students & readers have their desks, & consult the text books, cyclopedias, catalogues &c., & from wh. they send orders for books to the Library – the Library not being visited, at all, for study. There is no such room as this in Europe. It is a circle, with dome, lighted from above, & its diameter is 4 feet greater than that of the dome of St. Paul's. The autographs are now open to view of all, spread out in glass cases, – as well as many other lit. curiosities. This is the grandest Literary & Scientific institution (not for instruction) in the world. The Reading Room, I told Parker, was a temple to the deification of Bibliology." [11]