In the late 1980s, British Rail took delivery of 35 two-coach Class 155 units from British Leyland[1] to replace older Regional Railways DMUs. Shortly after, West Yorkshire PTE took delivery of 7 two-coach units for use in the Yorkshire region. After the Class 155s entered service, it became an emerging requirement for ageing rural and branch line trains to be replaced. In the early 1990s, BR decided to go forward with plans to convert the Regional Railways Class 155 fleet into single-coach multiple units and to replace its fleet of Class 121 and 122 diesel railcars.

The layout of the original non-cab ends was different from the original cab end, so the ends are noticeably distinct, and the vehicles are not symmetrical. The 7 West Yorkshire PTE Class 155s were not modified and remained as two-coach class 155 multiple units.[5]

Their maximum speed is 75 mph (121 km/h)[1] and suited for working less widely used local services such as the London Midland service from Coventry to Nuneaton and the Heart of Wales Line. They are fitted with standard BSI auto-couplers and are therefore able to work in tandem with other multiple units fitted with the same coupler, including classes 142, 143, 144, 150, 156, 158, 170 and 172.

The new or small cab is significantly smaller than the original Leyland cab and encroaches on the door vestibule area, providing cramped conditions for Drivers and Guards. Similar to other Sprinter units, such as the Classes 150/2, 156 and 158, these units have gangway door connections at either end that allow passengers and staff to walk between units working in multiple. These units also have the benefit of having passenger door control panels at either end of the cars.

Pre-privatisation, British Rail operated all Class 153s under their Regional Railways division and were used on many branch lines throughout the Midlands, Wales and Northern England. Due to their multiple working ability, Class 153s were often seen in multiple other classes of sprinter units such as class 156s and class 150s. Class 153s were often found working services from;

The class was a common sight in Regional Railways areas.

Upon privatisation of British Rail, the Class 153 fleet was divided amongst several different operators.

Arriva Trains Wales has a fleet of 8 Class 153s.[6] They are normally used on rural branchlines, such as the Heart of Wales Line from Shrewsbury to Swansea and on local stopping services from Crewe to Shrewsbury via Nantwich – but are also used on some mainline services. One is used daily on the short Cardiff Queen Street to Cardiff Bay shuttle.

London Midland use ten Class 153 DMUs on commuter lines in the West Midlands including the Coventry to Nuneaton Line and the Marston Vale Line between Bedford and Bletchley.

All ten units were inherited from Central Trains in their livery. All of the units are being repainted into London Midland city lines livery upon refurbishment at Eastleigh works. The Class 153s that were used on the Stourbridge Town Branch Line have been replaced by new built lightweight Class 139 railcars. This was due to take place in December 2008, but the delivery of the new units was delayed, and after several months of bustitution London Midland reintroduced diesel services from 15 March pending the completion of Class 139 testing. The Class 139 received passenger certification from Network Rail in March 2009[7] and the service finally began three months later.[8]

East Midlands Trains fleet of Class 153s are used on rural routes in the East Midlands. These are:

All of the East Midlands Trains Class 153 units have been repainted into the local lines livery of the company with the exception of three. The three units numbered 153376, 153379 and 153384 still wear the Central trains colours, albeit with East Midlands Trains branding.

As of July 2010 the first unit from the local fleet for East Midlands Trains 153319 entered Neville Hill depot in Leeds for a C6 refresh programme. This work will include corrosion repair, internal refresh and a cab refurbishment programme.[9]

First Great Western took over the Wessex Trains fleet upon the merger of the two franchises. Wessex Trains had, in turn, inherited its fleet of 13 units from its predecessor, Wales & West.

Units are used on local services in Cornwall, Devon, and around Bristol. They are also used on Bristol Temple Meads to Weymouth, Southampton, and Worcester services and Swindon via Melksham to Southampton service.

Following the introduction of a new timetable on 12 December 2006, four units were taken off lease and stored at the former Alsthom works at Eastleigh. They were Nos. 153302, 153308, 153355 and 153374. This decision was criticised at the time by passengers, this was due to an increase in overcrowding on services in the West Country. After a period in storage these four units were pressed into service with East Midlands Trains.

On 9 December 2007, First Great Western received an additional Class 153 (number 153361) from Arriva Trains Wales bringing its total to 12. This unit arrived in the blue with gold star livery of former operator First North Western, (once carried by the FGW Class 142s when they first arrived on hire).

From late 2007, a refurbishment programme commenced to refurbish the 153 fleet. The trains have been externally reliveried in the 'Local Lines' livery (an adaptation of the 'Dynamic Lines' livery consisting of names of local places and attractions forming the lines) and the interiors have received the following improvements:

This refurbishment programme was completed by early June 2008.

For Summer 2011, two LM Class 153s, 153325 and 153333, were allocated to the South West for strengthening purposes, based at Exeter (EZ) depot for the duration. This allocation has now been made permanent as LM surrendered them to FGW as a result of keeping three Class 150 units after all the new Class 172 units entered service. 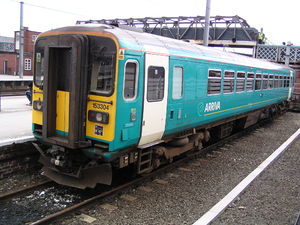 Northern inherited a fleet of eight units from First North Western (FNW), which are used on local services around Manchester, Chester and on Lancaster to Barrow-in-Furness to Carlisle and Preston to Ormskirk services. The fleet was repainted in the now obsolete North Western Trains blue and gold livery. Prior to becoming part of Northern, four former FNW units were transferred to the Arriva Trains Wales franchise, since the lines operated by FNW in Wales were transferred to this new company.

A larger fleet of 12 units were inherited from Arriva Trains Northern (ATN). They are used on various local services around Leeds, Doncaster, and Sheffield. One regular job is the Cleethorpes to Barton-on-Humber services, which see a class stable at Cleethorpes overnight and Sunday. Other jobs are the Lincoln to Scunthorpe via Retford and Sheffield, and the Saturday only Sheffield to Cleethorpes via Retford.

In December 2007, two units were taken off lease from Northern and transferred to East Midlands Trains. Both units, 153319 and 153357 carried Arriva livery.

File:153322 Interior.JPG
The refurbished interior of an Anglia Railways Class 153

Anglia Railways inherited a small fleet of seven units, for local services in Suffolk and Norfolk. Services operated by these units included Ipswich to Cambridge, Peterborough, Felixstowe and Lowestoft, and Norwich to Lowestoft, Great Yarmouth and Cromer. One set was also hired to First Great Eastern for use on the Sudbury branch.

In 2003, Anglia started to refurbish its fleet, and repaint them in Anglia Railways livery. However, only three (unit nos. 153309/322/335) were completed; In 2004, Anglia became part of the 'One' franchise operated by the National Express Group (which was subsequently renamed National Express East Anglia). inheriting the fleet of seven units, for local services in Suffolk and Norfolk. ONE reassesed the fleet requirements and allowed 153311 and 153326 to leave the franchise to East Midlands Trains, which has had repercussions with unit service availability since. Services operated by these units included Norwich to Sheringham and Great Yarmouth, Norwich to Lowestoft, they were also sometimes seen on the Ipswich to Ely Line. This has since become part of Abellio Greater Anglia. During 2012, the owning ROSCO (Porterbrook) began refurbishing the body and interiors and repainting them in base white with red doors and 'Greater Anglia' logos.

Some units have received names:[10]

When the units were first introduced, Hurst models produced a detailing kit to convert a Dapol model of a 155 into a 153.[11]