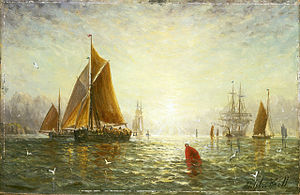 Painting of A Brixham trawler by William Adolphus Knell. The painting is now in the National Maritime Museum. 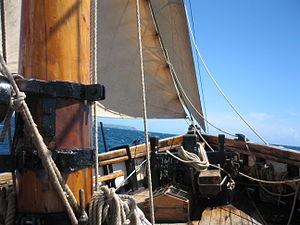 Looking forward on the deck of the Brixham trawler Leader, under way under sail off the south coast of England. July 2008. 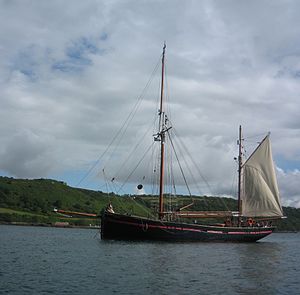 The Brixham trawler Leader at anchor off Cawsand, near Plymouth. July 2008.

A Brixham trawler is a type of wooden, deep-sea fishing trawler first built in Brixham in Devon, England, in the 19th century[1] and known for its high speed.[2] The design was copied by boat builders around Britain, and some were sold to fishermen in other countries on the North Sea.[2]

The Brixham trawler was a heavy displacement boat of some 60–80 ft length on the deck, with a long straight keel, short or no overhangs, and a low freeboard to ease the handling of the nets, though this feature was disguised by high bulwarks.[3] Brixham trawlers carried a tall gaff rig, often ketch rigged though also simply a large sloop, that was powerful enough to carry them quickly to and from the fishing grounds and to tow large trawls.[4] Renowned yacht aerodynamicist and sailor C. A. Marchaj commented on the type, “With little area of keel surface, these boats lacked weatherliness as compared with the Quay Punt… Not without reason, fishermen of the north-east coast swore that the forefoot took them to windward.”[3]

Brixham once had a fleet of 400 such vessels,[5] whose distinctive red sails were coated with local red ochre for protection. Other fleets were at Lowestoft with 375 trawlers, 450 at Hull, 625 at Great Yarmouth and 840 at Grimsby, with smaller numbers at other places.[4] Only five remain afloat. One of them, Provident, took part in the Thames Diamond Jubilee Pageant.[6]