The Brixton Academy, officially called O2 Academy, Brixton, is one of London's leading music venues, nightclubs and theatres.[1] Situated in Brixton, south London, England, the building has hosted a range of leading rock acts since becoming a music venue in 1983. The maximum capacity is 4,921 (3,760 standing downstairs; 1,083 seated and 78 standing in the circle), alternatively the all-seated capacity is 2,391.

The venue started life as a cinema and theatre in 1929 on the site of a private garden in Stockwell Road. Designed by the architects Thomas Somerford and E A Stone,[2] it was built at a cost of £250,000 as an "Astoria" theatre. The opening show was the Al Jolson film The Singing Fool, followed by a variety act, including Heddle Nash and Derek Oldham which was broadcast by the BBC. The building still retains many of its original features, including the proscenium arch and Art Deco interior. 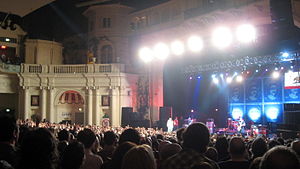 Part of the Art Deco interior of the auditorium

The Astoria eventually closed its doors as a cinema on 29 July 1972. It was then converted into the Sundown Centre rock venue in September 1972, but was not a success and the Sundown closed down some four months later. In May 1974 planning permission was sought to demolish the Grade II listed building and replace it with a motor showroom and petrol station. However the redevelopment scheme was scrapped. The building was kept heated after it closed, and was used as an equipment store by the Rank Organisation.

In 1981, The Astoria, remodelled by Sean Treacy, who later ran the entire site services, was re-opened as a rock venue called "The Fair Deal" with a concert by UB40 and an interior restoration. The Clash played the venue in 1982 on their Casbah Club tour (30 July) but the venue closed later that year due to debt. In 1983, Simon Parkes bought the venue for £1, and re-opened it as the Brixton Academy.

The Academy's success steadily grew throughout the 1980s with numerous reggae productions and it was hired out to major rock and pop acts such as Eric Clapton, Dire Straits & The Police for rehearsal. The venue was also used for video shoots for Wham and Culture Club.

In 1995 Parkes sold the Brixton Academy to Break For The Border. Under its new ownership (McKenzie Group), reinvestment started immediately, with a complete £500,000 refurbishment of the Art Deco building frontage to its original grandeur, additional facilities both front of house and backstage and a capacity increase to just under 5,000.

The venue is currently run by the Academy Music Group after a re-branding in August 2004, and hosts a range of live acts and club nights. 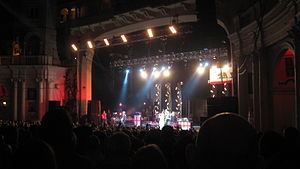 The decorative proscenium arch, framing the stage, with a concert in progress (Sex Pistols, 2007)

Being one of the biggest non-arena venues in London, the Brixton Academy has been used by many very successful acts. The venue has also been voted venue of the year twelve times since 1994 in the annual NME Awards.[3] In addition the venue has won the Music Week Award for Venue of the Year several times including 2009.[4]

The Smiths played their last ever gig here in December 1986[5] which was an Anti-Apartheid benefit scheduled for the Royal Albert Hall but rearranged to the Brixton Academy due to Johnny Marr being involved in a car accident.

Madonna played a special (not during a concert tour) performance at the venue in 2000, to promote the release of her album, Music. The concert was broadcast live online and was watched by a record-breaking audience of 9 million.[citation needed]

Leftfield set the venue's decibel record in 1996.[citation needed] They were summarily banned from using the same sound system at the venue after the high bass levels started disintegrating the ceiling, resulting in showers of dust and plaster.[6] They returned in 2000 using a different sound system.