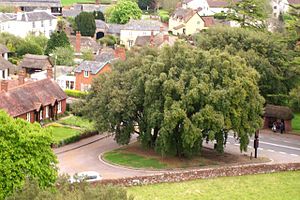 Broadclyst is a village and civil parish in the East Devon local government district. It lies approximately 5 miles northeast of the city of Exeter, Devon, England, on the B3181. In 2001 its population was 2,830, reducing at the 2011 Census to 1,467.[1] An electoral ward with the same name exists whose population at the above census was 4,842.[2]

Its church is 15th century, with an ancient cross. It has many battlements, pinnacles and gargoyles. In the year 1001 the village is said to have been burned down by Danish invaders.

Killerton House, a National Trust property, is close to the village, as well as Broadclyst Cricket Club, which play within the gardens of Killerton House. The village pubs are the Red Lion Inn and the New Inn on Whimple Road. The Clyst Vale Community College secondary school is located in Dog Village. Until 1966 the village was served by its own railway station named "Broad Clyst".

Churchill Farm is the origin of the name of the Churchill family.[3]

Broadclyst railway station was opened in 1860 by the London and South Western Railway on its London Waterloo to Exeter line. It closed in 1966 but some of the buildings remain.[4]

On 16 October 1975, the nearby M5 opened and the A38 road that ran through the village became quiet, later being reclassified B3181. This must have been the most significant event in the villages history, as it transformed daily life.

Broadclyst has been twinned since 2006 with the French village of Plobannalec-Lesconil, in southern Finistère in Brittany. This twinning was formalised in 2010 and the twinning links are now very active and enthusiastic on both sides.