A broadside (also known as a broadsheet) is a single sheet of inexpensive paper printed on one side, often with a ballad, rhyme, news and sometimes with woodcut illustrations. They were one of the most common forms of printed material between the sixteenth and nineteenth centuries, particularly in Britain, Ireland and North America and are often associated with one of the most important forms of traditional music from these countries, the ballad.

The nature of broadsides

With primitive early printing presses, printing on a single sheet of paper was the easiest and most inexpensive form of printing available and for much of their history could be sold for as little as a penny.[1] They could also be cut in half lengthways to make ‘broadslips’, or folded to make chapbooks and where these contained several songs such collections were known as 'garlands'.[2] 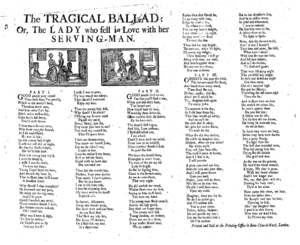 The earliest broadsides that survive date from the early sixteenth century, but relatively few survive before 1550.[3] From 1556 the Stationers Company in London attempted to force registration of all ballads and some 2,000 were recorded between then and 1600, but, since they were easy to print and distribute, it is likely that far more were printed.[4] Scholars often distinguish between the earlier blackletter broadsides, using larger heavy ‘gothic’ print, most common up to the middle of the seventeenth century, and lighter whiteletter, roman or italic typefaces, that were easier to read and became common thereafter.[5]

Broadsides were produced in huge numbers, with over 400,000 being sold in England annually by the 1660s, probably close to their peak of popularity.[6] Many were sold by travelling chapmen in city streets and at fairs or by balladeers, who sang the songs printed on their broadsides in an attempt to attract customers.[7] In Britain broadsides began to decline in popularity in the seventeenth century as initially chapbooks and later bound books and newspapers, began to replace them, until they appear to have died out in the nineteenth century.[6] They lasted longer in Ireland, and although never produced in such huge numbers in North America, they were significant in the eighteenth century and provided an important medium of propaganda, on both sides, in the American War of Independence.[8]

Most of the knowledge of broadsides in England comes from the fact that several significant figures chose to collect them, including Samuel Pepys (1633–1703), Robert Harley, 1st Earl of Oxford and Mortimer (1661–1724), in what became Roxburghe Ballads.[9] In the eighteenth century there were several printed collections, including Thomas D'Urfey's Wit and Mirth: or, Pills to Purge Melancholy (1719–20), Bishop Thomas Percy's Reliques of Ancient English Poetry (1765), and Joseph Ritson's, The Bishopric Garland (1784).[9] In Scotland similar work was undertaken by figures including Robert Burns and Walter Scott in The Minstrelsy of the Scottish Border (1802–03).[9] One of the largest collections was made by Sir Frederick Madden who collected some 30,000 songs now in the 'Madden Collection' in the Cambridge University Library [1].

Broadside ballads (also known as 'roadsheet’, 'broadsheet', ‘stall’, ‘vulgar’ or ‘come all ye’ ballads) varied from what has been defined as the ‘traditional’ ballad, which were often tales of some antiquity, which has frequently crossed national and cultural boundaries and developed as part of a process of oral transmission.[10] In contrast broadside ballads often lacked their epic nature, tended not to possess their artistic qualities and usually dealt with less consequential topics. However, confusingly many ‘traditional’ ballads, as defined particularly by the leading collectors, Svend Grundtvig for Denmark and Francis Child for England and Scotland, only survive as broadsides.[11] Among the topics of broadside ballads were love, religion, drinking-songs, legends, and early journalism, which included disasters, political events and signs, wonders and prodigies.[12] Generally broadside ballads included only the lyrics, often with the name of a known tune that would fit suggested below the title.