From Infogalactic: the planetary knowledge core
Jump to: navigation, search
This article is about an individual theatre of this name. For theatre district and the collection of 500+ seat theatres in New York City that are referred to as "Broadway", see Broadway theatre. 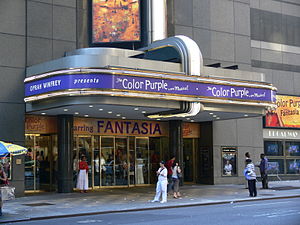 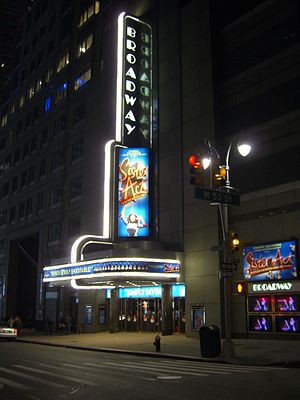 The Broadway Theatre during the run of Sister Act, ca. 2011.

Designed by architect Eugene De Rosa for Benjamin S. Moss, it opened as B.S. Moss's Colony Theatre on Christmas Day 1924 as a venue for vaudeville shows and motion pictures. The theater has operated under many names and owners. It was renamed Universal's Colony Theatre, B.S. Moss' Broadway Theatre, and Earl Carroll's Broadway Theatre before becoming a legitimate theater house simply called Broadway Theatre on December 8, 1930. In 1937, known as Ciné Roma, it showed Italian films.[1] For a short time during the 1950s it showed Cinerama films.[2]

On November 18, 1928 the first Mickey Mouse cartoon released to the public, Steamboat Willie, debuted at the Colony. Producer Walt Disney returned on November 13, 1940 to debut the feature film Fantasia in Fantasound, an early stereo system.[citation needed]

The Shubert Organization bought the theater in 1939 and renovated it extensively in 1956 and 1986. It has long been a popular theatre for producers of musicals because of large seating capacity, and the large stage, which is nearly sixty feet deep. Often plays that have become successful in smaller theaters have transferred to the Broadway Theatre.[1]