From Infogalactic: the planetary knowledge core
Jump to: navigation, search
For the 2002 film, see Brocéliande (film). 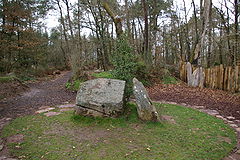 Brocéliande is the name of a legendary forest in France that first appears in literature in 1160, in the Roman de Rou, a verse chronicle written by Wace.[1]

Brocéliande is a notable place of legend because of its uncertain location, unusual weather, and its ties with Arthurian Romance, most notably a magical fountain and the tomb of the legendary figure Merlin.[2]

Early source works provide unclear or conflicting information on the exact location of Brocéliande; different hypotheses exist to locate Brocéliande on the map.

Brocéliande is briefly mentioned in one historical text:

Brocéliande's unusual weather alone is noted in a handful of texts:

By the timeframe of 1230–1240, the forest of Brocéliande is established as part of Arthurian legend, having appeared in multiple writings.

Brocéliande continues to appear throughout the Arthurian canon, in works such as Alfred, Lord Tennyson's 19th century poem Idylls of the King and 20th century works including Edwin Arlington Robinson's 1917 poem Merlin and Alan Seeger's 1916 poem Brocéliande. As in many of the earlier Arthurian works, Brocéliande is the location where Vivien entraps Merlin inside an oak tree.[2]

The name was an inspiration for J.R.R. Tolkien's fictional realm of Beleriand in Middle-earth. The name Broseliand was used in the early sketches of The Silmarillion (1926 to 1930).

Several of the short stories of Sylvia Townsend Warner's collection Kingdoms of Elfin (many of which appeared in The New Yorker in the 1970s) are set in Brocéliande or mention it, among several other enchanted forests where Townsend's Elfin folk live.

It appears in the movie Robin Hood (2010, directed by Ridley Scott) as the place where Robert Loxley is ambushed by the French.

In Michael Swanwick's The Dragons of Babel, Broceliande is a train station where a bomb was dropped in a war between two kingdoms.

Broceliande is the name of a forest in Joan Aiken's young adult novel "The Stolen Lake" which, despite taking place in a fictionalized version of South America, has a strong Arthurian themes.

In Bernard Cornwell's Arthurian trilogy The Warlord Chronicles, Broceliande is one of two British (Celtic) kingdoms that form modern-day Brittany, the other being Armorica.

The ABC television series Once Upon a Time features Brocéliande in the season 5 episode "Siege Perilous" as the location of a magical toadstool needed for a potion to free the sorcerer Merlin from his imprisonment in a tree. The lake in the center of Brocéliande is filled with possessed suits of armor known as Phantom Knights.