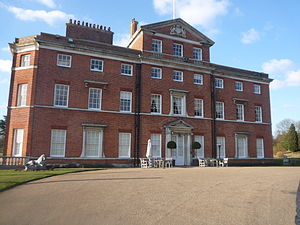 Brocket Hall is an architecturally Grade I-listed classical four-to-five storey country house set in Brocket Hall Park and Garden at the northern end of the urban area of Hatfield, Hertfordshire, England, 22 miles (35 km) from London by road. In its grounds are two golf courses and seven smaller listed buildings, such as the early 17th-century house, which now incorporates a fine-dining restaurant called "Auberge du Lac", Brocket Lea and The Temple built by Paine later that century.

It is owned on a long leasehold by Club Corporation of Asia (CCA), with the future reversionary interest set to arise in the middle of the 21st century owned by a trust of the line of peers who took their name from it in 1933.

Sir Matthew Lamb, 1st Baronet, purchased the estate in 1746, complete with Brocket Lea, the older house on the south side of the upper course of the river visible from almost all of the estate.[1] He built the hall as it is seen today around 1760 to the designs of the architect Sir James Paine.

Brocket Hall is a tall red brick neoclassical house in a fine landscape setting with a Palladian bridge. The interior of the house is mostly not on a grand scale but the exceptions are the main staircase and the Grand Saloon that was decorated specifically for entertaining royalty. The walls are lined with silk, the original furniture was made by Chippendale, the ceiling was painted by Francis Wheatley and the state banqueting table seats eighty people. The cost of this one room is recorded as £1,500 which equated to more than the cost of a substantial manor house at the time.

Paine also built the Temple with an Adam-style plaster ceiling, elliptical porch that has niches either side of Victorian period half glazed door and a pediment above its eastern entrance, typical of the finest garden temples of the era.[2]

The pleasure grounds were laid out initially in the mid C18 as parkland with many clumps of trees and singles, being remodelled as a pleasure circuit with a waterside walk as part of Woods' campaign of the 1770s.[3]

The park surrounds the Hall which is set in open parkland with the remains of scattered parkland trees. The parkland is since the mid-1990s largely overlain by golf courses and is bounded by substantial woodland belts.[3]

On the parkland site were two predecessors, the first of which was built in 1239 as Watership or Durantshide manor early held variously of Hatfield Manor and the Bishop of Ely (i.e. as secure family tenants). One of these was built about 1430; whereas in 1413 John Mortimer held Waterships it is known in 1477 Thomas Brockett held both manors.[4] The family continued to occupy both - being in 1553 home to Sir John Brocket, a wealthy spice importer and Captain of Queen Elizabeth’s personal guard. His daughter Mary was the heiress to the estate who married Thomas Reade, and their son, Sir William Reade was born in 1587 at Brocket Hall. Sir William, his wife Maybel and children ventured forth to America in 1635 to Woburn, Massachusetts.[5]

Sir Matthew Lamb's son was Peniston Lamb, 1st Viscount Melbourne and he was often visited at Brocket Hall by the Prince Regent, who had a liaison with Lady Melbourne.

The next owner was William Lamb, 2nd Viscount Melbourne, who was Queen Victoria's (a regular visitor to the hall) first Prime Minister from 1835–41. His wife, Lady Caroline, famously had an affair with Lord Byron causing Lord Melbourne much embarrassment. For one of his birthdays she held a state banquet in the Saloon, and for a surprise course she arranged to be served from a large silver dish, and when the lid was raised, it revealed her completely naked.

On Lamb's death, the house passed to his sister, Emily, whose second husband was another Prime Minister, Henry John Temple, 3rd Viscount Palmerston.

On Emily's death, the hall then passed to Emily's grandson by her first marriage, Francis Cowper, 7th Earl Cowper, though it was his younger brother, Henry (d.1887), who lived at Brocket.

In 1893, Lord Mount Stephen, formerly of Montreal, leased Brocket Hall from the 7th Earl for the remainder of his lifetime. For the next three years guests included the Queen's children: Prince and Princess of Wales, the Duke and Duchess of Connaught and the Princess Mary, Duchess of Teck. When his first wife died in 1896, one year later Mount Stephen remarried Gian Tufnell, the Lady-in-Waiting to the Duchess of Teck, who encouraged the match. Gian was a lifelong friend and confidant of the Duchess' daughter, Mary of Teck, wife of King George V, and the Mount Stephenses regularly entertained the Royal couple. Gian preferred life at Brocket Hall to the social life that surrounded their city residence at Carlton House Terrace. She was said to have been exceedingly popular around Hatfield, and her many benefactions endeared her to hundreds. The family Stephens had come to know Charles Nall-Cain as the first Lady Mount Stephen was a close friend of Georgina Gascoyne-Cecil, Marchioness of Salisbury, who lived on the neighbouring estate, Hatfield House.[6]

After the death of the 7th Earl Cowper (1905), the underlying future reversion was left to his niece, but she died only a year after him (1906) and the estate passed to her husband, Admiral Lord Walter Kerr, who lived at Melbourne Hall. When the life tenant Lord Mount Stephen's died in 1921, Kerr put the estate up for sale and in 1923 it was purchased by Sir Charles Nall-Cain who co-ran the brewing company Walker Cain Ltd; he was created Baron Brocket in 1933. The hall served as a maternity hospital during World War II. 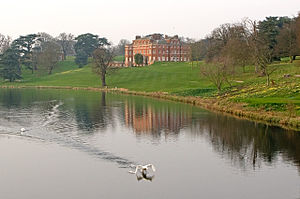 The Broadwater and Brocket Hall, March 2011

In the late 20th century Charles Nall-Cain, 3rd Baron Brocket (— verbally (Lord) Charlie Brocket), during his two and a half years served in prison for insurance fraud, let the whole estate for a minimum of 60 years to CCA (Club Corporation of Asia) based in Hong Kong; he has since gone on to present television programmes such as Bad Lads Army and Scream! If You Want to Get Off. The company converted Brocket Hall into a hotel and conference centre and built a second eighteen hole golf course (Palmerston Course). Further facilities include a Palmerston Golf Academy, and a restaurant called Auberge du Lac which was formerly associated with celebrity chef Jean-Christophe Novelli and once held a Michelin Star.

Within its grounds is an early 17th-century home in red brick, almost facing it across the Broadwater, a landscaped section of the River Lea which forms the central valley of the park.[7]

Brocket Hall has also been used as filming location for a number of large-scale film and television productions, including Night of the Demon (1957), Murder with Mirrors, Johnny English Reborn, The Queen, Willow, and Pride and Prejudice featuring Colin Firth.[8] It also features as the home of character, Paul Eirl, in the Inspector Morse episode, "Who Killed Harry Field?" (1991).

The estate almost touches the A1(M) motorway near Welwyn Garden City which is on the opposite side of the motorway, which has a full junction to the north; administratively and historically it lies at the extreme northern end of the civil parish of Hatfield which is run as a very large town council.[9][10]