From Infogalactic: the planetary knowledge core
Jump to: navigation, search
For other uses, see Bromley (disambiguation).

Bromley is a large suburban town, the administrative headquarters of the London Borough of Bromley in Greater London,[2] England. It was historically a market town chartered since 1158 and an ancient parish in the county of Kent.[3] Its location on a coaching route and the opening of a railway station in 1858 were key to its development, and the economic history of Bromley is underpinned by a shift from an agrarian village to commerce and retail. As part of the suburban growth of London in the 20th century, Bromley significantly increased in population and was incorporated as a municipal borough in 1903. It has developed into one of a handful of regionally significant commercial and retail districts outside central London[4] and has formed part of Greater London since 1965. Most of Bromley including the town centre falls under the BR1 postcode district, whereas areas to the west towards Shortlands are part of BR2 instead. The population of the town, consisting of the Bromley Town ward, was 16,826 in the 2011 census.

Bromley is first recorded in a charter of 862 as Bromleag and means 'woodland clearing where broom grows'. It shares this Old English etymology with Great Bromley in Essex, but not with the Bromley in Tower Hamlets.[5]

The history of Bromley is closely connected with the See of Rochester. In AD 862 Ethelbert, the King of Kent, granted land to form the Manor of Bromley. It was held by the Bishops of Rochester until 1845, when Coles Child, a wealthy local merchant and philanthropist, purchased Bromley Palace (now the hub of the Bromley Civic Centre) and became lord of the manor. The town was an important coaching stop on the way to Hastings from London, and the now defunct Royal Bell Hotel (just off Market Square) is referred to in Jane Austen's Pride and Prejudice. It was a quiet rural village until the arrival of the railway in 1858 in Shortlands, which led to rapid growth, and outlying suburban districts such as Bickley (which later overflowed into Bromley Common) were developed to accommodate those wishing to live so conveniently close to London.[6]

Bromley, also known as Bromley St Peter and St Paul, formed an ancient parish in the Bromley and Beckenham hundred and the Sutton-at-Hone lathe of Kent.[7] In 1840 it became part of the expanded Metropolitan Police District. The parish adopted the Local Government Act 1858 and a local board was formed in 1867. The board was reconstituted as Bromley Urban District Council in 1894 and the parish became Bromley Urban District. It formed part of the London Traffic Area from 1924 and the London Passenger Transport Area from 1933.[8] In 1934, as part of a county review order, the borough was expanded by taking in 1,894 acres (7.66 km2) from the disbanded Bromley Rural District; an area including parts of the parishes of Farnborough, Hayes, Keston and West Wickham. Bromley became part of the newly created Greater London in 1965, in the new London Borough of Bromley.

Bromley is located 9.3 miles (15 km) south east of Charing Cross and is one of the major metropolitan centres identified in the London Plan.[4] Bromley is a post town in the BR postcode area, consisting of BR1 and part of the BR2 postcode district.[9] BR1 covers Bromley, Bickley, Sundridge and part of Downham; and the BR2 portion covers Hayes, Shortlands, Bickley and Bromley Common.[10]

Climate in this area has mild differences between highs and lows. The Köppen Climate Classification subtype for this climate is "Cfb". (Marine West Coast Climate/Oceanic climate).[11]

Bromley is one of the major metropolitan centres identified in the London Plan.[13]

The town has a large retail area, including a pedestrianised High Street and the Intu Bromley centre (the "Glades" until 2013), the main shopping mall. The shopping area includes retailers such as Gap, Oasis, Russell & Bromley and Waterstone's, whilst the restaurants includes a branch of the small chain of Belgian-themed Belgo restaurants. 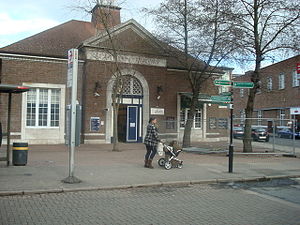 Bromley South station with services to London Victoria nonstop or, via Herne Hill // Kentish Town via Blackfriars and also London St.Pancras (Intl) // trains are available to many other stations incl. Orpington, Sevenoaks via Swanley, Gillingham, Ashford International via Maidstone East and a splitting service to Ramsgate and Dover Priory via Chatham.

Bromley North station with services to London Bridge and Charing Cross by changing at Grove Park.

Bromley has a number of theatres, the most notable being the Churchill Theatre in the town centre and the Bromley Little Theatre close to Bromley North railway station. The Churchill Theatre was opened on 19 July 1977 by HRH Prince of Wales, and seats 785. It is run on a contract currently held by the Ambassador Theatre Group acting as both a receiving and producing house, with productions transferring to the West End or touring nationally. An example being recent tours of The Rocky Horror Picture Show. Bromley also has a central library in the same building as the Churchill Theatre with a large book stock, Internet and wifi access, reference library and local studies department. It functions as the central library of the broader Bromley Borough Libraries Service. Empire Cinemas own a four-screen site in Bromley, with screen 1 being its biggest with a capacity of 392. Screens 2 and 3 have disabled access.

Bromley also has the cultural distinctiveness of having its own Morris team, The Ravensbourne Morris Men. Founded in 1947 as a post war revival team following an inaugural meeting at the then Jean's Café, which was located opposite Bromley South Station.[14]

In the famous Monty Python Spam sketch Bromley was stated to be the location of the fictional Green Midget Café, where every item on the menu was composed of spam in varying degrees. In another Monty Python sketch it was stated that all seven continents are visible from the top of the Kentish Times building in Bromley.

The Mall in Bromley appeared on the cover of the 1982 album Sounds Like Bromley by Bromley born Billy Jenkins. The picture is of the rear of the then Bromley Toy Fayre, Bramber Womenswear and car park above a supermarket.

There is a thriving social rugby scene in Bromley, with notable clubs such as Beckenham RFC, Parkhouse FC and Bromley RFC.

Beccehamians RFC is a rugby union club founded in 1933 which plays competitive rugby at Sparrows Den at the bottom of Corkscrew Hill in nearby West Wickham.[15]

Bromley has numerous schools, and is home to Bromley College of Further & Higher Education. There are two specialist Media Arts Schools, Hayes School and The Ravensbourne School. Bishop Justus School is a specialist Music College. It also has the Ravens Wood and Darrick Wood Schools. There are many independent schools within the London Borough of Bromley, including Eltham College (in the nearby area of Mottingham - within the borough of Bromley and near the London Borough of Lewisham) and Bromley High (situated in the nearby, affluent area of Bickley- also within the borough of Bromley). Bromley has also opened up to a recent new secondary school called Bishop Justus, a music specialist school and college. 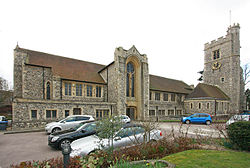 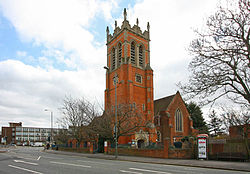 The parish church of St Peter and St Paul stands on Church Road. It was largely destroyed by enemy action on 16 April 1941 and rebuilt in the 1950s incorporating the medieval tower and reusing much of the flint and fragments of the original stone building.[16] The most noteworthy historic building is Bromley College, London Road. The central public open spaces are; Queen's Gardens, Martin's Hill, Church House Gardens, Library Gardens and College Green.

Another parish church in Bromley worth noting is St Mark's, which stands in Westmoreland Road. The present church is the third. The first was built as a temporary iron church in 1884 to cope with Bromley's growing population, on land slightly to the east of the present church, donated by a local man called Eley Soames. The road name St Mark's Road preserves the rough location of the former site.[17]

The second church was built in brick and stone on the present site, and designed by Evelyn Hellicar, son of the then vicar of St Peter and St Paul's. It was completed in 1898 in the Perpendicular Gothic style and consecrated by William Walsh, Bishop of Dover, on 22 October that year. The tower, though, was not completed until 1904. Like St Peter and St Paul's, St Mark's was heavily damaged in the London Blitz of 1941. Only the tower survived intact.[17]

On 3 June 1952, the Duchess of Kent laid the foundation stone of the present church, which was designed by T W G Grant and built by David Nye. Besides the tower, other parts of the fabric of the original church were used in the rebuilding. Inside there are some interesting monuments: to Samuel Ajayi Crowther, John Cole Patteson and Vedanayagam Samuel Azariah, who were all bishops in the Commonwealth.[17]

Notable residents - past and present

H. G. Wells, "one of the remarkable minds of the twentieth century," was born in Bromley on 21 September 1866, to Sarah and Joseph Wells; his father was the founder of the Bromley Cricket Club and the proprietor of a shop that sold cricket equipment.[18] Wells spent the first thirteen years of his life in Bromley. From 1874 to 1879 he attended Tomas Morley's Bromley Academy, at 74 High Street.[19] There is an 'H.G. Wells Centre' in Masons Hill near the southern end of the High Street which houses the Bromley Labour Club. In August 2005, the wall honouring H.G. Wells in Market Square was repainted. The current wall painting features a rich green background with the same H.G. Wells reference and the evolution sequence of Homo sapiens featured in Origin of Species by Charles Darwin, a former resident of nearby Downe Village.[20] Wells wrote about Bromley in an early unsigned article in the Pall Mall Gazette in which he expressed satisfaction that he had been born in an earlier, more rural Bromley.[21] A Blue Plaque marks H.G. Wells' birthplace in Market Square, on the wall of what is now a Primark store. A marble plaque appears above the door of number 8 South Street, erstwhile home to the Dame school where "Bertie", as he was called as a child, learned to read and write. H.G. Wells featured Bromley in two of his novels: The War in the Air (which refers to Bromley as Bunhill) and The New Machiavelli (in which Bromley is referred to as Bromstead).

Other world famous authors who hail from Bromley include Captain W.E. Johns (author of the Biggles adventures), David Nobbs (author of The Fall and Rise of Reginald Perrin and writer for Les Dawson and The Two Ronnies), and Enid Blyton who wrote influential children's fiction such as the Secret Seven and Famous Five stories. A blue historical plaque can be found on the external wall of her former home on Shortlands Road, Bromley.

Scottish education secretary Michael Russell MSP was born and spent the early years of his life in Bromley.