Brompton Cemetery is located near Earl's Court in west London, England (postal districts SW5 and SW10), in the Royal Borough of Kensington and Chelsea. It is managed by The Royal Parks, and is one of the Magnificent Seven cemeteries. Established by Act of Parliament, it opened in 1840 and was originally known as the West of London and Westminster Cemetery.

Consecrated by the Bishop of London in June 1840, it is one of Britain's oldest and most distinguished garden cemeteries. Some 35,000 monuments, from simple headstones to substantial mausolea, mark the resting place of more than 205,000 burials. The site includes large plots for family mausolea, and common graves where coffins are piled deep into the earth, as well as a small columbarium. Brompton was closed to burials between 1952 and 1996, but is once again a working cemetery, with plots for interments and a 'Garden of Remembrance' for the deposit of cremated remains.[1] 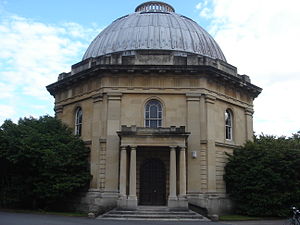 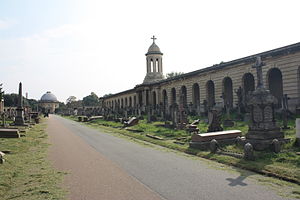 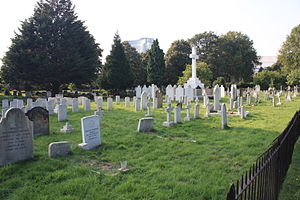 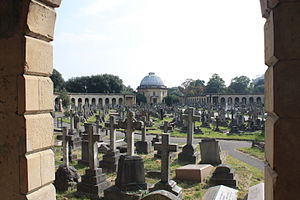 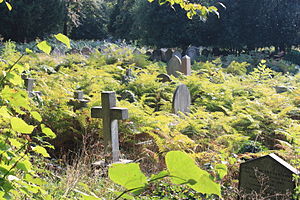 The cemetery was one of seven large, modern cemeteries founded by private companies in the mid-19th century (sometimes called the 'Magnificent Seven') forming a ring around the edge of London. The inner city burial grounds, mostly churchyards, had long been unable to cope with the number of burials and were seen as a hazard to health and an undignified way to treat the dead.

Brompton Cemetery was designed by Benjamin Baud and has at its centre a modest domed chapel (in the style of the basilica of St. Peter's in Rome) at it southern end, reached by long colonnades, and flanked by catacombs. The chapel is dated 1839. The site, previously market gardens, was bought from Lord Kensington and is 39 acres (160,000 m2) in area. The cemetery was designed to give the feel of a large open air cathedral. It is rectangular in shape with the north end pointing to the northwest and the south end to the southeast. It has a central "nave" which runs from Old Brompton Road towards the central colonnade and chapel.

Below the colonnades are catacombs which were originally conceived as a cheaper alternative burial to having a plot in the grounds of the cemetery. Unfortunately, the catacombs were not a success and only about 500 of the many thousands of places in them were sold. There is also an entrance on the south side from the Fulham Road. The Metropolitan Interments Act 1850 gave the government powers to purchase commercial cemeteries. The shareholders of the cemetery were relieved to be able to sell their shares as the cost of building the cemetery had overrun and they had seen little return on their investment.

Buried in the cemetery are 289 Commonwealth service personnel of World War I and 79 of World War II, whose graves are registered and maintained by the Commonwealth War Graves Commission, a few of whom are instanced in the list of Notable Interments (below).[3] The majority of war graves are contained in a railed section to the west (also containing 19th century servicemen graves)

Beatrix Potter, who lived in The Boltons nearby, may have taken the names of some of her characters from tombstones in the cemetery. Names of people buried there included Mr. Nutkins, Mr. McGregor, Mr. Brock, Mr. Tod, Jeremiah Fisher and even a Peter Rabbett, although it is not known for certain if there were tombstones with these names.[4][5]

The cemetery has a reputation for being a popular cruising ground for gay men.[6] 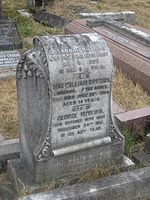 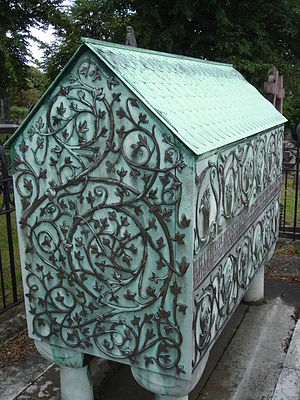 Famous occupants of the cemetery include:

The Native American Sioux chief, Long Wolf, a veteran of the Oglala Sioux wars was buried here on 13 June 1892 having died age 59 of bronchial pneumonia while taking part in the European tour of Buffalo Bill's Wild West Show. He shared the grave with a 17-month-old Sioux girl named White Star believed to have fallen from her mother's arms while on horseback. 105 years later a British woman named Elizabeth Knight traced his family and campaigned with them to have his remains returned to the land of his birth. In 1997, Chief Long Wolf was finally moved to a new plot in the Wolf Creek Cemetery (ancestral burial ground of the Oglala Sioux tribe) at Pine Ridge, South Dakota. His great grandson John Black Feather said "Back then, they had burials at sea, they did ask his wife if she wanted to take him home and she figured that as soon as they hit the water they would throw him overboard, so that's why they left him here."[7][8][9]

There was a Brulé Sioux tribesman buried in Brompton named Paul Eagle Star. His plot was in the same section as Oglala Sioux warrior Surrounded By the Enemy who died in 1887 from a lung infection at age 22. Like Long Wolf, he took part of Buffalo Bill's Wild West Show. Paul died a few days after breaking his ankle when he fell off a horse in August 1891. His casket was exhumed in spring of 1999 by his grandchildren, Moses and Lucy Eagle Star. The reburial took place in Rosebud's Lakota cemetery. Philip James accompanied the repatriation.

Brompton Cemetery is one of the Magnificent Seven cemeteries, and is adjacent to Stamford Bridge, the home ground of Chelsea Football Club.