Brooklyn Celtic was a name used by at least two U.S. soccer teams. The first was an early twentieth century amateur team which was formed in August 1910 and dominated the New York Amateur Association Football League from 1912 to 1917. The second was a member of the professional American Soccer League in the 1930s and early 1940s. It was renamed Brooklyn St. Mary's Celtic in 1936.

The Brooklyn Celtic, also known as the Brooklyn Celtics and Celtic F.C., was an early twentieth century American soccer team which competed in the New York Amateur Association Football League. They won the second division in 1910–1911, gaining promotion to the first division. They proved their worth as a first division team in the 1911–1912 season when they tied New York Clan MacDonald for second place. The two teams met in a playoff for sole position of second, with Clan MacDonald winning 1–0.[1] The next season, Celtic went on a streak of five straight league championships. 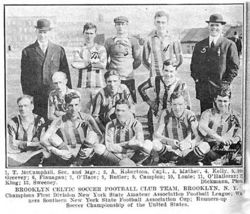 The Brooklyn Celtic was an American soccer club based in Brooklyn, New York that was an inaugural member of the reformed American Soccer League. The club replaced Brooklyn F.C. 12 games into the season, assuming their record.

Before the 1935/36 season, the club was renamed Brooklyn St. Mary's Celtic.