From Infogalactic: the planetary knowledge core
Jump to: navigation, search
Not to be confused with Naval Station New York. 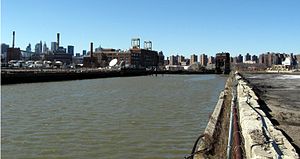 Wallabout Channel, the northernmost channel of the Navy Yard

The United States Navy Yard, also known as the Brooklyn Navy Yard and the New York Naval Shipyard (NYNS), is a shipyard located in Brooklyn, New York, 1.7 miles (2.7 km) northeast of the Battery on the East River in Wallabout Basin, a semicircular bend of the river across from Corlear's Hook in Manhattan. It was bounded by Navy Street and Flushing and Kent Avenues, and at the height of its production of warships for the United States Navy, it covered over 200 acres (0.81 km2). The tremendous efforts of its 70,000 workers during World War II earned the yard the nickname "The Can-Do Shipyard."[1] 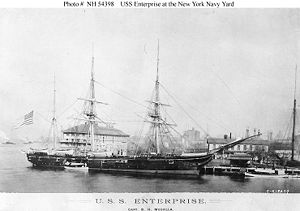 The screw sloop-of-war USS Enterprise docked at the shipyard, circa 1890 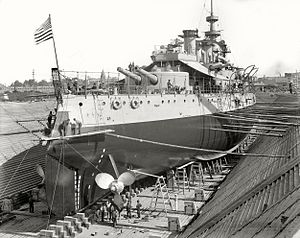 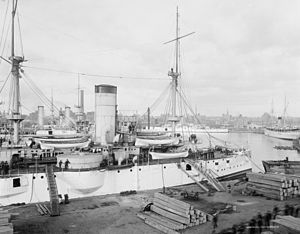 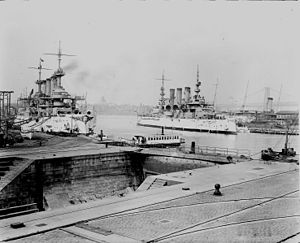 USS Connecticut and Nebraska in the yard in 1909

Following the American Revolution, the waterfront site was used to build merchant vessels. Federal authorities purchased the old docks and 40 acres (160,000 m2) of land for $40,000 1801, and the property became an active U.S. Navy shipyard five years later, in 1806. The offices, storehouses and barracks were constructed of handmade bricks, and the yard's oldest structure (located in Vinegar Hill), the 1807 federal style commandant's house, was designed by Charles Bulfinch, architect of the United States Capitol in Washington, DC. Many officers were housed in Admiral's Row.

Military chain of command was strictly observed. During the yard's construction of Robert Fulton's steam frigate, Fulton, launched in 1815, the year of Fulton's death, the Navy Yard's chief officers were listed as: Captain Commandant, Master Commandant, Lieutenant of the Yard, Master of the Yard, Surgeon of the Yard & Marine Barracks, Purser of the Navy Yard, Naval Storekeeper, Naval Constructor, and a major commanding the Marine Corps detachment.

The nation's first ironclad ship, Monitor, was fitted with its revolutionary iron cladding at the Continental Iron Works in nearby Greenpoint. By the American Civil War, the yard had expanded to employ about 6000 men. In 1890, the ill-fated Maine was launched from the yard's ways.

On the eve of World War II, the yard contained more than five miles (8 km) of paved streets, four drydocks[2] ranging in length from 326 to 700 feet (99 to 213 meters), two steel shipways, and six pontoons and cylindrical floats for salvage work, barracks for marines, a power plant, a large radio station, and a railroad spur, as well as the expected foundries, machine shops, and warehouses. In 1937, the battleship North Carolina was laid down. In 1938, the yard employed about 10,000 men, of whom one-third were Works Progress Administration workers. The battleship Iowa was completed in 1942 followed by the Missouri, which became the site of the Surrender of Japan on 2 September 1945. On 12 January 1953, test operations began on Antietam, which emerged in December 1952 from the yard as America's first angled-deck aircraft carrier.

During World War II, the pedestrian walkways on the Williamsburg and Manhattan Bridges spanning the East River offered a good overhead view of the navy yard, and were therefore encased to prevent espionage.

The Brooklyn Naval Hospital, constructed 1830–1838 and rebuilt 1841–1843, was decommissioned in the mid-1970s.[3][4][5] It was one of the oldest naval hospitals in the United States. The 60,000-square-foot complex was designed by Martin E. Thompson. The hospital had its beginning in 1825 when the Secretary of the Navy purchased 25 acres adjacent to the Brooklyn Naval Yard. The hospital was active from the Civil War through World War II with the Navy Surgeon General reporting in 1864 an average of 229 patients, with 2,135 treated during the year. The hospital also counted on its staff some of first female nurses and medical students in the United States Navy. 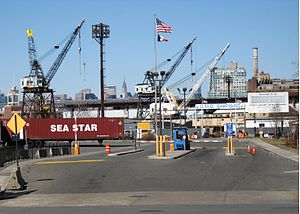 A study initiated by the Department of Defense under Robert S. McNamara in late 1963 sought to accomplish savings through the closure of unneeded or excess military installations, especially naval ship yards. On November 19, 1964, based on the study, the closure of the navy yard was announced, along with the Army's Fort Jay on Governors Island and its Brooklyn Army Terminal, all to take effect by 1966. At the time, the yard employed 10,600 civilian employees and 100 military personnel with an annual payroll of about US$90 million. The closure was anticipated to save about 18.1 million dollars annually.[6]

lionSeymour Melmen, an engineering economist at the Columbia University Graduate School of Engineering, looked into the plight of the shipyard workers at the NYNS and came up with a detailed plan for converting the then naval shipyard into a commercial shipyard which could have saved most of the skilled shipyard jobs. The plan was never put in place. The Wagner Administration looked to the auto industry to build a car plant inside the yard. No U.S. car manufacturer was interested, and foreign car manufacturers claimed that with the conversion of the dollar, it was too expensive. The Navy decommissioned the yard in 1966, after the completion of the Austin-class amphibious transport dock USS Duluth. The Johnson administration refused to sell the yard to the City of New York for 18 months. When the new Nixon administration came into power, they signed the papers to sell the yard to the city. Leases were signed inside the yard even before the sale to the city was signed. 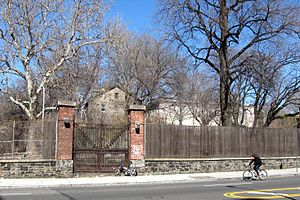 Base housing at Ryerson Avenue gate

In 1967, Seatrain Shipbuilding, which was wholly owned by Seatrain Lines, signed a lease with the Commerce Labor Industry Corporation of Kings (CLICK) which was established as a nonprofit body to run the yard for the city. CLICK's lease with the newly formed Seatrain Shipbuilding was not very business friendly. Seatrain planned to build five very large crude carriers (VLCCs) and seven container ships for Seatrain Lines. It eventually built four VLCCs (the largest ships ever to be built in the Brooklyn Navy Yard), eight barges, and one ice-breaker barge. The last ship to be built in the Brooklyn Navy Yard was the VLCC Bay Ridge, built by Seatrain Shipbuilding. In 1977, the Bay Ridge was converted from a VLCC to a floating production storage offtake vessel. The Bay Ridge was renamed Kuito and is operating for Chevron off of the coast of Angola in 400 meters of water in the Kuito oil field.[7] Employment inside the yard peaked in 1976, with nearly 6,000 workers with Seatrain Shipbuilding and Coastal Dry Dock and Repair accounting for 80% of the employment.

In 1979, Seatrain Lines closed its gates, ending the history of Brooklyn shipbuilding. In 1972, Coastal Dry Dock and Repair Corp leased the three small dry docks and several buildings inside the yard from CLICK. Coastal Drydock only repaired and converted US Navy vessels, and closed in 1987.[8] CLICK had been replaced by the nonprofit Brooklyn Navy Yard Development Corporation in 1981. By 1987, the Brooklyn Navy Yard Development Corporation failed in all attempts to lease any of the six dry docks and buildings to any shipbuilding or ship-repair company. 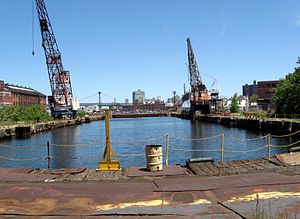 The NYNS has become an area of private manufacturing and commercial activity. Today, more than 200 businesses operate at the yard and employ about 5,000 people.[9] Brooklyn Grange Farms operates a 65,000-square-foot (6,000 m2) commercial farm on top of Building 3.[10] Steiner Studios is one of the yard's more prominent tenants with one of the largest production studios outside of Los Angeles. Many artists also lease space and have established an association called Brooklyn Navy Yard Arts. 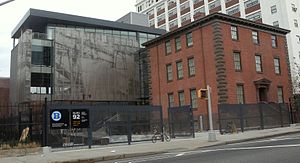 The museum's main exhibit focuses on the history of the NYNS and its impact on American industry, technology, innovation, and manufacturing, as well as national and New York City's labor, politics, education, and urban and environmental planning. Also, displays and videos about the new businesses in the facility are seen. 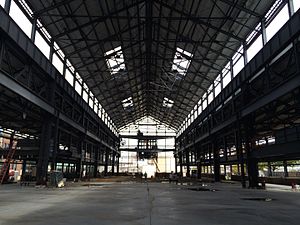 Building 128 at the yard has been repurposed into a 90,000 square foot design, testing, production, and shipping facility developed for Crye Precision LLC. The design, developed in collaboration with ADS, SGH and Verdant is approved by the SHPO and the National Park Service in accordance with the NHPA. Lead tenant Crye Precision is joined by real estate developer Macro Sea in the 220,000 square foot Green Manufacturing facility, which opened Spring 2015.[16] 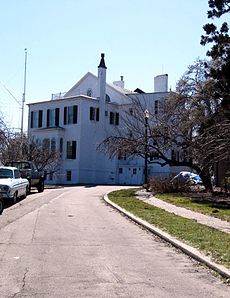 In 2014, the entire yard was listed on the National Register of Historic Places as a historic district,[17] and certain buildings have also been given landmark status. Quarters A, the commander's quarters building, is a National Historic Landmark. The Navy Yard Hospital Building (R95) and Surgeon's Residence (R1) are both designated as NYC Landmark buildings. A report commissioned by the National Guard suggests that the entirety of the Admiral's Row property meets the eligibility criteria for inclusion on the National Register.[18] Admiral's Row has fallen into disrepair and has sparked a landmarks debate.[19]

A bronze marker on the nearby Brooklyn Bridge contains a section commemorating the history of the shipyard, mentioning several of the notable ships that were built there, including Maine, Missouri, and the last ship constructed there, Duluth.[20]