The first free public library in Brooklyn was that of the collegiate institution established in 1888, the Pratt Institute, founded by Charles Pratt. Available not only for its own students and faculty, the library was also open to the general public at that early time.

In 1852, several prominent citizens established the "Brooklyn Athenaeum and Reading Room" for the instruction of young men. It was as was the practice in those times, a private, subscription library for members, who were recruited and encouraged by the up-rising mercantile and business class of young men, to continue by constant reading whatever formal education they had received through a university, college, high school/private academy, or trade school. Its collections focused on the liberal arts and the humanities such as literature, history, biography, economics, philosophy, and other applications later labeled social studies.

Five years later, in 1857, another group of young men with businessmen, merchants, manufacturers, founded the "Brooklyn Mercantile Library Association of the City of Brooklyn", with its holdings more pronounced in the fields of business, economics, mathematical, technical, commercial and scientific. The Librarian-in-Charge was Stephen Buttrick Noyes, who later went to the Library of Congress in 1866, but returned to Brooklyn three years later in 1869. He later commenced developing the extensive catalog for the collections which he completed in 1888. Later the two collections were merged in 1869, and later moved to a headquarters building on Montague Street. In 1878, the Library Associations were renamed the "Brooklyn Public Library". 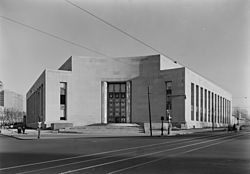 The first main branch ("central library") moved among various buildings, including a former mansion at 26 Brevoort Place.[1] [2] Between 1901 and 1923, the famous Scotsman, steel industrialist, financier and philanthropist Andrew Carnegie donated $1.6 million, assisting in the future development and construction of 21 Carnegie Library additional neighborhood branches. Carnegie had been earlier inspired by the bequest, construction and maintenance by local merchant, banker and financier who became a famous philanthropist in his adopted city of Baltimore in Maryland. Enoch Pratt, entertained Mr. Carnegie at his mansion/townhouse on West Monument Street and Park Avenue, during the mid-1880s and toured him around his new public library and its four regional branches, presented to the City in 1886 after four years of planning and construction, along with an endowment to continue its support if supplemented in perpetuity by the City of Baltimore, which it agreed and thus was born the Enoch Pratt Free Library, the oldest public library system in America and affected and inspired many others around America by the examples of Pratt and Carnegie. 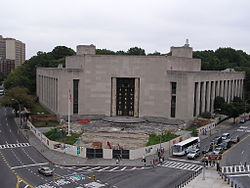 The Central Library at Grand Army Plaza in October 2005, during construction of a new entrance plaza and underground auditorium.

There are 58 neighborhood branches throughout the borough, of which many are Carnegie libraries. The library has four bookmobiles, including the Kidsmobile, which carries children's materials, and the Bibliobús, which carries a Spanish language collection.[3]

The Bookmobile is a 32-foot (9.8 m)-long, 11.5-foot (3.5 m)-high vehicle housing a mobile library. Carrying up to 6,000 books, the Bookmobile serves communities whose local branches are closed for renovation. The Bookmobile offers many of the services available at other branches.

The Kidsmobile is a smaller, more colorful version of the Bookmobile. During the school year, the Kidsmobile visits schools, day care centers, Head Start, after-school programs and community events. In the summer, the Kidsmobile also travels to parks and camps. In addition to books, the Kidsmobile offers storytelling and arts and crafts.

The Bibliobús is a mobile Spanish-language library. It brings books and other media to Spanish-speaking communities in Brooklyn. The Bibliobús serves sites such as schools, daycares, community-based organizations, senior centers, nonprofit organizations, and community events.[5]

The Shelby White and Leon Levy Information Commons opened at Central Library on January 15, 2013. It features an open workspace with 25 computers and seating and outlets for more than 70 laptop users; 7 meeting rooms, including one that doubles as a recording studio; and a 36-seat training lab.[6]

Brooklyn Public Library's governing board is the Board of Trustees, consisting of thirty-eight members, all serving in non-salaried positions. The Mayor and the Brooklyn Borough President each appoint eleven of the trustees. Twelve additional members are elected[clarify] to serve on the Board. The Mayor, New York City Comptroller, Speaker of the City Council and Brooklyn Borough President are ex officio members of the Board. All non-ex officio members of the Board serve three-year terms.[7]

Linda E. Johnson was named President and CEO on August 16, 2011, after having served as the institution's Interim Executive Director since July 1, 2010. She replaced Dionne Mack-Harvin who served as executive director from March 2007. Mack-Harvin was the first African American woman to lead a major public library system in New York state.[8][9] Previously, Ginnie Cooper had been the executive director of the BPL since January 2003. Other notable executive directors include Kenneth Duchac who ran the system from 1970 until his retirement in 1986. Duchac is the father of John Doe, founder and lead singer of seminal 1980s punk band X.