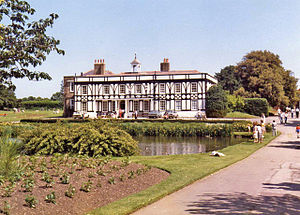 Broomfield House in 1981, before the fires

Broomfield House is a building of historical interest located in Broomfield Park, Palmers Green, in the London Borough of Enfield. Built during the 16th century, it was damaged by fires in 1984 and 1994, and is currently awaiting restoration as part of the English Heritage Restoration Programme.

Broomfield house was sold to London merchant Joseph Jackson in 1624 after several previous occupants. During the 150 years that the Jackson family were in possession of the house, the house was internally remodelled to a considerable extent. The grand staircase was built and murals were painted by Gerard Lanscroon, and the surrounding Broomfield Park was created. During the late 18th century to early 19th century the once U-shaped building was altered into a rectangular shape, enclosing the once east-facing courtyard. After a period where the house was let to tenants, the house and 54 acres (220,000 m2) of land were sold for development to Southgate Urban District Council, who opened the park to the public in 1903.

Between 1907 and 1910 the building housed Southgate County School, with Southgate's first maternity centre opening there in 1917. The building was classified as Grade II* in 1950 because of its history and architectural uniqueness. 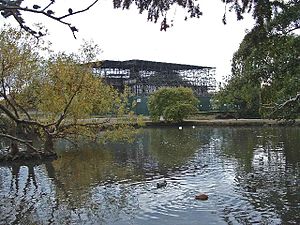 Broomfield House after the fire in 1984

In 1984 a fire broke out in the building which damaged the roof and the top floor. The cause was deemed to be electrical. A temporary roof was erected to ensure further damage was kept to a minimum, though a permanent roof was not rebuilt as the house was no longer in use. A second fire in 1994 made the building in its current state unusable and unsafe. Though the council wanted to demolish the building, heritage groups persuaded the council to obtain a report looking into the possibility of restoration. This concluded that restoration should be undertaken, and the building was made safe.

Currently the building remains enclosed by scaffolding until details of the full restoration and its future use by the community can be agreed upon.

On 25 November 2009 the transformation of Broomfield House took another step forward, as the Mayor of London's office confirmed that £500,000 was to be made available for preparatory and public consultation work. The plan is to make the house into sheltered housing accommodation. Concerns have been raised by some local people about the proposals which the council will address as part of its public consultation.

An unknown proportion of the £500,000 was used to create extensive evaluations of environmental issues, planning ideas and the way forward. Further funding has now been withdrawn.

The house is likely to be beyond repair soon, as the surviving structure is now only expected to last less than a year. At that point it will have survived around 30 years in a fire-damaged state and Enfield Council's effort to renovate the historic building will no doubt end. Demolishing the building was their original preference.