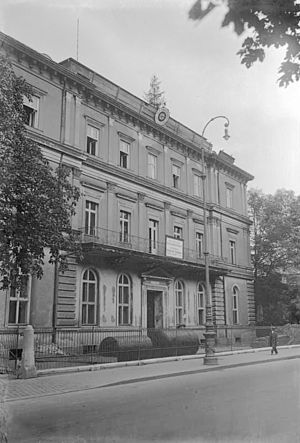 The Brown House (German: Braunes Haus) was the national headquarters of the National Socialist Party (Nationalsozialistische Deutsche Arbeiterpartei) in Germany. A large impressive stone structure, it was located at 45 Brienner Straße in Munich, Bavaria. It was named for the color of the party uniforms.

By 1930, party headquarters at Schellingstrasse 50 were too small (with the number of workers increasing from four in 1925 to 50 that year). In April 1930, Elizabeth Stefanie Barlow (widow of William Barlow, an English wholesale merchant) offered the Barlow Palace (built in 1828) for purchase to Franz Xaver Schwarz, party treasurer. A sales contract was signed on 26 May, with the purchase price of 805,864 marks. Funds for renovation of party headquarters were provided by industrialist Fritz Thyssen. The house was converted from an urban villa to an office building by the architect Paul Troost. He and Adolf Hitler also re-decorated it in a heavy, anti-modern style. It opened on 1 January 1931. Adolf Hitler kept a life-size portrait of Henry Ford next to his desk in the Brown House since Ford and Adolf Hitler admired each other's achievements.[1]

Hitler maintained an office in the Brown House, as did Hans Frank, Heinrich Himmler, Hermann Göring, Rudolf Hess, Philipp Bouhler, and Franz Xaver Schwarz. Also stored there was the so-called Blutfahne, or "blood flag" or "blood banner." This was the National Socialist flag that was carried at the head of the demonstration during the 1923 Beer Hall Putsch. When Munich police opened fire on the marchers, it was spattered with the blood of the wounded and became a sacred relic of the National Socialist Party.

The Brown House was damaged in October 1943 and largely destroyed in an allied bombing raid late in World War II. The rubble was cleared away in 1947, leaving an empty lot.

In December 2005 the government of Bavaria announced that the site would soon become the home of the future NS-Dokumentationszentrum ("Documentation Centre for the History of National Socialism").[2]