The Borough of Broxbourne is a local government district and borough in Hertfordshire, England. Its council is based in Cheshunt, other towns include Broxbourne, Hoddesdon and Waltham Cross. The eastern boundary of the district is the River Lea. The borough covers 20 square miles (52 km2) in south east Hertfordshire having a population of about 96,000.

The borough was formed on 1 April 1974 by the merger of Cheshunt and Hoddesdon urban districts.

In Broxbourne borough, the Metropolitan Green Belt protects the surrounding countryside. The west of Broxbourne borough extends over well-wooded countryside to include Goffs Oak and the popular Lee Valley Park which marks the eastern boundary. Although urbanised with industrial and commercial activity, the whole area retains much of its rural character and is liked by people commuting to London. Most of Broxbourne is classified as part of the Greater London Urban Area, although it is not a London borough.

The borough is twinned with the Sicilian city of Sutera. 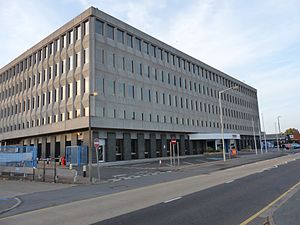 There are 600 companies in the borough, with warehousing and distribution sectors being particularly well represented. The main industrial areas are around Waltham Cross and the Essex Road area of Hoddesdon.[1] The employers with over 250 employees include: Fitzpatrick PLC in Hoddesdon (civil engineers); J Sainsbury also in Hoddesdon; Marks & Spencer, Turnford Retailers; Merck Sharp & Dohme in Hoddesdon involved in pharmaceutical research; Tesco has its national headquarters at Delamere Road, Cheshunt.[2]

The Borough of Broxbourne at Park Plaza Waltham Cross is also home to the world's largest printing plant, which produces publications for News International including The Sun, The Times and formerly the News of the World. Employing 200 people on a 23-acre (93,000 m2) site to produce 86,000 newspapers per hour on each of its twelve printing presses (a total capacity of over 1,000,000 newspapers per hour),[3] the plant cost £350 million and replaced the News International press in Wapping.[4]