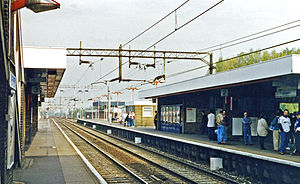 View NE, towards Bishops Stortford in 1995 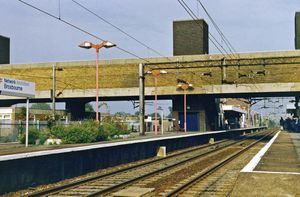 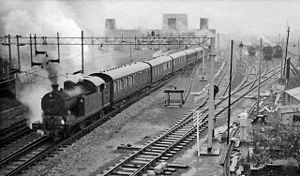 View northward, towards Cambridge in 1960

Broxbourne railway station, opened in 1840,[2] serves the towns of Broxbourne and Hoddesdon in Hertfordshire, England. It is on the West Anglia Main Line, and train services are provided by Abellio Greater Anglia, which also manages the station.

Broxbourne Station was officially opened by the Northern and Eastern Railway on 15 September 1840. It was on their proposed line to Cambridge, but the next section of the line to Latton Mill (Harlow) was not opened until August 1841. Therefore, for a short period of time Broxbourne served as the terminus for the line which ran up the Lea Valley from Stratford Junction where it joined the Eastern Counties Railway. The station was moved from its original site in Station Road to the present site in 1959.

The station was Grade II listed in March 2009;[3] "one of a very small number of post-war railway stations of clear architectural distinction".[4]

Ticket barriers were installed in 2011. 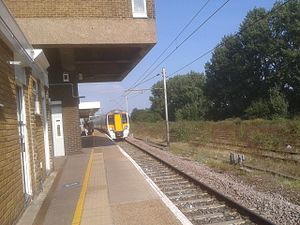 British Rail Class 379 on a Sunday service to Stratford

The typical Monday-Saturday off-peak service is:

On Sundays the off-peak service is: