Bruce Cabot (April 20, 1904 – May 3, 1972) was an American film actor, best remembered as Jack Driscoll in King Kong (1933) and for his roles in films such as the 1936 version of Last of the Mohicans, Fritz Lang's Fury and the western Dodge City. He was also known as one of "Wayne's Regulars", appearing in a number of John Wayne films beginning with Angel and the Badman.

Cabot was born Étienne Pelissier Jacques de Bujac in Carlsbad, New Mexico, to a prominent local lawyer, Colonel Etienne de Bujac, and Julia Armandine Graves, who died shortly after giving birth to him. Leaving the University of the South in Sewanee, Tennessee without graduating, Cabot worked at many jobs, including as a sailor, an insurance salesman, oil worker, surveyor, prize fighter, sold cars, handled real estate and also worked a slaughterhouse. A meeting with David O. Selznick at a Hollywood Party started his acting career.[1]

Cabot appeared in nearly one hundred feature films. He made his debut in 1931 in Heroes of the Flames. He tested for the lead role of The Ringo Kid in John Ford's western Stagecoach (1939), but John Wayne got the part.

He played a soldier who seduced a naive woman (portrayed by Irene Dunne) and got her pregnant as he left for the war, in the 1933 production Ann Vickers. He then starred in the 1933 blockbuster King Kong, which became an enormous success and established Cabot as a star. Cabot also played villains, appearing as a gangster boss in Let 'Em Have It (1936) and as the Huron warrior Magua opposite Randolph Scott in The Last of the Mohicans (1936). He starred with Spencer Tracy, playing the leader of a lynch mob in Fritz Lang's first Hollywood film, Fury (1936), and with Errol Flynn in Michael Curtiz's epic Western Dodge City, which became one of Warner Bros.'s biggest hits. A consistent box office draw, Cabot appeared in many movies at many studios before leaving Hollywood to serve in World War II.

Cabot enlisted in December 1942 and, after Officer Training School in Miami Beach, became a first lieutenant in the U.S. Army Air Forces. He was an Air Transport Command operations officer at el Aouina, Tunis from July to November 1943.[citation needed] It is alleged (by L. Fletcher Prouty) that Cabot was involved in a gold smuggling ring that shipped Nazi gold to Brazil after the war's end. However, Counter Intelligence Corps documents show that Cabot was a courier for a smuggling ring run by high-ranking Air Transport Command officers to arbitrage Middle Eastern gold prices. Cabot, known to the Air Force as Lt. DeBujac, was apprehended in Cairo in November 1943 and after an investigation posted to the remote desert outpost of Atar in Mauritania, where he did odd jobs. He was separated from the service on 19 July 1944.[2]

Cabot's final screen appearance was in the 1971 James Bond film Diamonds Are Forever.

He was inducted into the New Mexico Entertainment Hall of Fame in 2012.

Cabot was married three times, to actresses Mary Mather Smith, Adrienne Ames and Francesca De Scaffa. It is possible that Mary Mather Smith was the black actress who starred in such all-black-cast films as The Girl from Chicago, but information about their marriage is difficult to find.

He was one of Errol Flynn's social pack for several years but they fell out during the production of the unfinished The Story of William Tell. Flynn was producing the film and asked Cabot, whom he described as "an old, old pal," to perform in it, knowing that Cabot was finding it hard to get work in Hollywood at that time. However, when Flynn's production partners defaulted, the production halted, leaving Flynn stranded in Rome facing financial ruin. Cabot, in an attempt to get paid when other cast members were working without pay, had Flynn's and his wife Patrice Wymore's personal cars and clothing in their Rome hotel seized. Flynn wrote angrily in his autobiography of what he termed Cabot's "betrayal."[3] Eleven years after Flynn's death, in an interview in England in 1970, Cabot paid tribute to him as a critically underestimated actor, but said that Flynn had destroyed himself through narcotic addiction.

Cabot died in 1972 at the Motion Picture Country Home at Woodland Hills, California from lung cancer[4] and was buried in his hometown, Carlsbad, New Mexico. 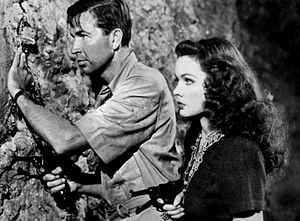 Cabot and Gene Tierney in a scene from the 1941 film Sundown. 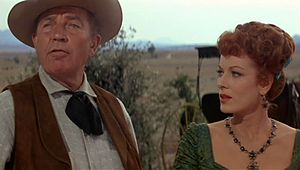 Cabot and Maureen O'Hara in a scene from the 1963 film McLintock!.

Bruce Cabot starred in a number of the Tales of Tomorrow episodes, television's first scifi/drama and an early hit for ABC. Tales of Tomorrow telecast live in New York and was seen by kinescope in other parts of the country. (1952-1953). Coast-to-coast television was not yet a possibility.