His name lives on in the McLaren team which has been one of the most successful in Formula One championship history, with McLaren cars and drivers winning a total of 20 world championships. McLaren cars totally dominated CanAm sports car racing with 56 wins, a considerable number of them with him behind the wheel, between 1967 and 1972 (and five constructors’ championships), and have won three Indianapolis 500 races, as well as the 24 Hours of Le Mans and 12 Hours of Sebring.

Born in Auckland, New Zealand, Bruce McLaren attended Meadowbank Primary School. As a nine-year-old, he contracted Perthes disease in his hip that left his left leg shorter than the right.

His parents, Les and Ruth McLaren, owned a service station and workshop in Remuera Rd, Remuera, Auckland;[2] Les McLaren had been a motorcycle racing enthusiast, but gave that up due to an injury before Bruce's birth, and began racing cars at the club level instead.[3] Bruce spent all of his free hours hanging around the workshop and developed his passion during his formative years.

Les McLaren restored an aging Austin 7 Ulster, which 14-year-old Bruce used in 1952 when he entered his first competition, a hillclimb. Two years later, he took part in his first real race and showed promise. He moved up from the Austin to a Ford 10 special and an Austin-Healey, then an F2 Cooper-Climax sports. He immediately began to modify and improve — and master - it, so much so that he was runner-up in the 1957–8 New Zealand championship series. 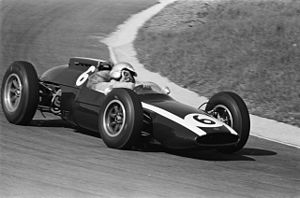 McLaren at the 1962 Dutch Grand Prix. 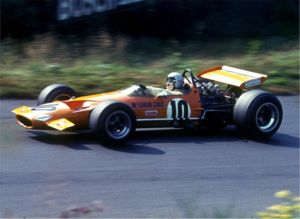 McLaren in the 1969 German Grand Prix 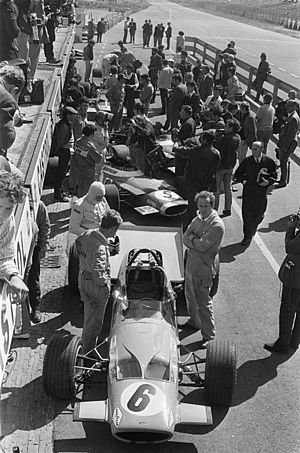 McLaren (centre left, white balaclava) prepares to take his seat in his McLaren M7C Formula One car, prior to the 1969 Dutch Grand Prix.

His performance in the New Zealand Grand Prix in 1958 was noted by Australian driver Jack Brabham (who would later invite McLaren to drive for him). Because of his obvious potential the New Zealand International Grand Prix organisation selected him for its 'Driver to Europe' scheme designed to give a promising Kiwi driver year-round experience with the best in the world. McLaren was the first recipient, to be followed by others later including Denny Hulme. McLaren went to Cooper and stayed seven years. He raced in F2 and was entered in the German Grand Prix at the Nürburgring in which F2 and F1 cars competed together. He astounded the motor racing fraternity by being first F2, and fifth overall, in a field of the best drivers in the world.

McLaren joined the Cooper factory F1 team alongside Jack Brabham in 1959 and won the 1959 United States Grand Prix at age 22 years 104 days, becoming the youngest ever GP winner (not including the Indianapolis 500) up to that time. He followed that with a win in the Argentine Grand Prix, the first race of the 1960 Formula One season, and he would finish runner-up that season to Brabham.

McLaren won the 1962 Monaco Grand Prix, eventually finishing a fine third in the championship that year. The next year, he founded Bruce McLaren Motor Racing Ltd, which remains in the Formula One championship simply as McLaren. McLaren continued to race and win in Coopers (including the New Zealand GP in 1964).

McLaren left Cooper at the end of 1965, and announced his own GP racing team, with co-driver and fellow Kiwi Chris Amon. Amon left in 1967 to drive for Ferrari. In 1968, McLaren was joined by another fellow Kiwi Denny Hulme, who had become world champion in 1967 with Brabham. McLaren took his fourth career win racing his own McLaren car at Spa in 1968, achieving the team's first Grand Prix win. Hulme won twice in the McLaren-Ford.

The 1969 championship was also a success, with McLaren finishing third in the standings despite taking no wins. In tribute to his homeland, McLaren's cars featured the "speedy Kiwi" logo.

McLaren's design flair and ingenuity were graphically demonstrated in powerful sports car racing. Just as the Can-Am began to become very popular with fans in Canada and the U.S., the new McLaren cars finished second twice, and third twice, in six races.

In 1966, McLaren and co-driver Chris Amon won the prestigious 24 Hour Race at Le Mans in a Ford GT40.

Career as a constructor

Bruce was a competitive driver, but in many ways his legacy, the McLaren Racing Team, is testimony to his abilities as an analyst, engineer, and manager that contributed much to the success of the cars that bore his name. In the early days of the McLaren sports cars, Bruce was testing and as he drove out of the pits, he noticed the fuel filler access door was flapping up and down as he drove. The current aerodynamic thinking was that it should have been pressed more firmly in place as the speed of the car increased. Instead, it bounced more vigorously as the speed increased. Instantly, his frustration at the sloppy work changed and he had an insight. Stopping in the pits, he jumped from the car, ran to a mechanic's tool box, grabbed a pair of shears, and started cutting the bodywork away behind the radiator. Climbing back in the car, he immediately began turning lap times faster than before.

I was first angry that the filler door hadn't been properly closed but then I began to wonder why it wasn't being pressed down by the airflow. The only answer was that there had to be a source of higher pressure air under it than over it.

From that session came the "nostrils" that have been a key McLaren design feature, even in the McLaren F1 road car, since that day.

Bruce McLaren noted that his team's cars were marginally less innovative than the Chaparrals of rival driver/designer Jim Hall, but their superior reliability was rewarded by race and championship victories. Long after his death, that culture prevailed and when Ron Dennis bought the team was reinforced by the lessons learned in his early career as a race mechanic.

Bruce McLaren died (aged 32) when his Can-Am car crashed on the Lavant straight just before Woodcote corner at Goodwood Circuit in England on 2 June 1970. He had been testing his new M8D when the rear bodywork came adrift at speed. The loss of aerodynamic downforce destabilized the car, which spun, left the track, and hit a bunker used as a flag station.

Motorsport author Eoin Young said that Bruce McLaren had "virtually penned his own epitaph" in his 1964 book From the Cockpit. Referring to the death of team-mate Timmy Mayer, McLaren had written:

The news that he had died instantly was a terrible shock to all of us, but who is to say that he had not seen more, done more and learned more in his few years than many people do in a lifetime? To do something well is so worthwhile that to die trying to do it better cannot be foolhardy. It would be a waste of life to do nothing with one's ability, for I feel that life is measured in achievement, not in years alone.

* McLaren was ineligible to score points in the 1958 German Grand Prix because he was driving a Formula Two car.

A list of further such volumes can be viewed at http://www.bruce-mclaren.com/about-bruce-mclaren/historical-books.html.