Bruce Weber (born March 29, 1946) is an American fashion photographer[1] and occasional filmmaker.[2] He is most widely known for his ad campaigns for Calvin Klein, Ralph Lauren,[3] Pirelli, Abercrombie & Fitch, Revlon, and Gianni Versace, as well as his work for Vogue, GQ, Vanity Fair, Elle, Life, Interview, and Rolling Stone magazines.

Weber's fashion photography first appeared in the late 1970s in GQ magazine, where he had frequent cover photos. Nan Bush, his longtime companion and agent, was able to secure a contract with Federated Department Stores to shoot the 1978 Bloomingdales mail catalog. He came to the attention of the general public[citation needed] in the late 1980s and early 1990s with his advertising images for Calvin Klein, and his portrait of the then young actor Richard Gere. His straightforward black and white shots, featuring an unclothed heterosexual couple on a swing facing each other, two clothed men in bed, and model Marcus Schenkenberg barely holding jeans in front of himself in a shower, catapulted him into the national spotlight.[citation needed] His photograph for Calvin Klein of Olympic athlete Tom Hintnaus in white briefs is an iconic image.[vague] He photographed the winter 2006 Ralph Lauren Collection. 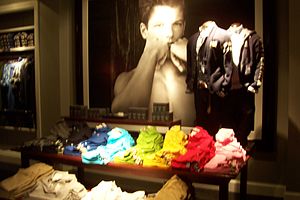 Some of Weber's other earliest fashion photography appeared in the SoHo Weekly News and featured a spread of men wearing only their underwear. The photos became the center of controversy and Weber was told by some that he would never find work as a fashion photographer again. This reputation stuck with him, as he says: "I don’t really work editorially in a large number of magazines because a lot of magazines don’t want my kind of photographs. It’s too risky for them.".[4]

After doing photo shoots for and of famous people (many of whom were featured in Andy Warhol's Interview magazine), Weber made short films of teenage boxers (Broken Noses),[2] his beloved pet dogs, and later, a longer film entitled Chop Suey. He directed Let's Get Lost, a 1988 documentary about jazz trumpeter Chet Baker.

Weber's photographs are occasionally in color; however, most are in black and white or toned shades.[2] They are gathered in limited edition books, including A House is Not a Home and Bear Pond, an early work that shows, among other models, Eric Nies from MTV's The Real World series.

Weber began collaborating with crooner Chris Isaak in the mid-1980s, photographing Isaak in 1986 for his second album, Chris Isaak. In 1988, Weber photographed a shirtless Isaak in bed for a fashion spread in Rolling Stone.[5] Isaak appeared in Let's Get Lost and Weber has directed a music video for Isaak. 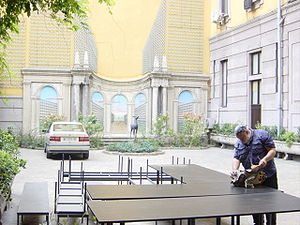 Weber is married to Nan Bush, with whom he sometimes collaborates. He has lived in Miami since 1998.[6][7]

Weber created the fashion label Weberbilt in 2003; his first line, "eat, swim, sex, sleep", went on sale in boutiques in London and Miami Beach, Florida, in 2004.[8]

In 1990, Weber directed the music video for the Pet Shop Boys single "Being Boring". He filmed a party with a diverse group of models. The video was filmed in one day by two film crews in a house on Long Island. Content including male and female nudity prevented the video from being played on MTV in the United States. In 1996 he directed the video for the Pet Shop Boys single "Se a vida é (That's the Way Life Is)" on location in a Wet 'n' Wild, a water park near Orlando, Florida. In 2002, he again directed a Pet Shop Boys video, for the song "I Get Along" from the album Release. Weber filmed this video on location at his own Little Bear studio in New York City. He also directed the music video for the Chris Isaak song "Blue Spanish Sky".