From Infogalactic: the planetary knowledge core
(Redirected from Brunswick-Grubenhagen)
Jump to: navigation, search 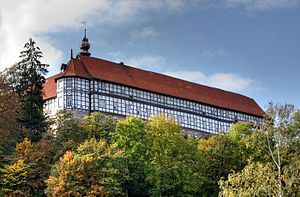 The principality was located on the southwestern edge of the Harz mountain range in present-day South Lower Saxony. It included two separate territories, one around the town of Einbeck with Grubenhagen Castle, and another domain around the towns of Osterode and Duderstadt (ceded to Mainz in 1366) with Clausthal, Herzberg, and Herzberg Castle. The dominion also comprised the eastern exclave of Elbingerode, today part of Saxony-Anhalt.

Grubenhagen was split off from the Brunswick Principality of Wolfenbüttel in 1291, when the sons of late Duke Albert the Tall (1236–1279) finally divided their heritage. Its first ruler was Duke Henry the Admirable. Henry's sons split the small principality further in 1322 as they themselves had numerous heirs; Otto, son of Duke Henry II, in view of his small share left for Montferrat, married Queen Joan I of Naples in 1376 and became Prince of Taranto in 1383. The ongoing fragmentation weakened the position of the Grubenhagen branch regarding estate distributions involving their Wolfenbüttel, Lüneburg and Calenberg cousins.

The Principality of Grubenhagen was finally reunited in 1526 under the rule of the Brunswick duke Philip I. However, in 1596 the Grubenhagen branch became extinct upon the death of his son Philip II. The territory was disputed by the different lines of the Welf dynasty: Duke Henry Julius, Prince of Wolfenbüttel, occupied Grubenhagen; his son Frederick Ulrich, however, had to cede it to Duke Christian, Prince of Lüneburg according to a 1617 ruling of the Imperial Chamber Court (Reichskammergericht) at Speyer.

With the Principality of Lüneburg, the Grubenhagen territory was finally inherited by Duke Christian Louis, Prince of Calenberg, in 1648. After his death in 1665 Grubenhagen ceased to exist as an independent principality. Formally, it remained a state of the Holy Roman Empire until its dissolution in 1806. 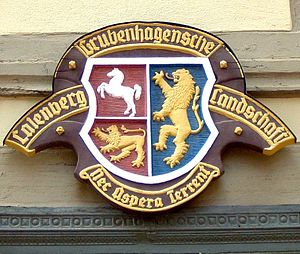 Coat of arms of the Calenberg-Grubenhagen Landschaft, photographed on a house in Göttingen