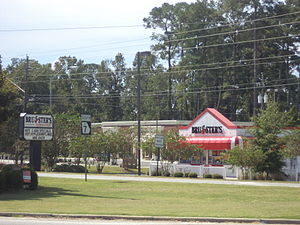 Bruster's Ice Cream is a chain of ice cream parlors whose ice cream and frozen yogurt is made from a milk-based mix at each individual store. Their primary operating region is in most states east of the Mississippi River. The chain is based in the Pittsburgh suburb of Bridgewater, Pennsylvania. All of the ice cream is made fresh in the stores in order to avoid ice crystal formation. The recipe book that Bruster's uses consists of over 170 recipes with many seasonal favorites.[citation needed] Bruster's also makes a variety of handmade ice cream cakes as well as homemade waffle cones. It recently started a Facebook site showing local deals and locations.

Bruce Reed got his start with the ice cream business in the 1950s, when, as a kid, he helped out his parents at their diner, Jerry's Curb Service, in Bridgewater, Pennsylvania, a small town located 27 miles northwest of Pittsburgh. It was through this experience that Reed would learn from his dad the secrets to the restaurant business.[citation needed]

In 1989, Reed decided to open an ice-cream shop right next door to Jerry's, which he first operated under a franchise from Handel's Homemade Ice Cream & Yogurt. However, after 15 months in the business, Reed dropped this Handel's franchise and began operating under the Bruster's name.

Some Bruster's locations also operate as franchisees of Nathan's Famous, Nathan's hot dogs and other Nathan's menu items, in addition to ice cream.