Buchs is a municipality in the Wahlkreis (constituency) of Werdenberg in the canton of St. Gallen in Switzerland. It lies on the border with Liechtenstein. It is about to become a city. 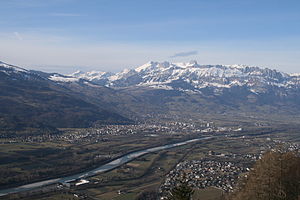 The municipality is located in the Werdenberg Wahlkreis. It is a shopping, industry and services center for the upper St. Gallen Rhine valley (German: Rheintal) as well as the capital of the Wahlkreis. It consists of the village of Buchs and the large hamlets of Räfis and Burgerau as well as scattered settlements on the Buchserberg.

It lies on the border with Liechtenstein, next to the town of Schaan.

The blazon of the municipal coat of arms is Vert on a Pale Argent a[n] Altar Cloth Sable ringed and fringed Or.[5]

In 2000[update] there were 1,687 persons (or 16.2% of the population) who were living alone in a private dwelling. There were 2,285 (or 22.0%) persons who were part of a couple (married or otherwise committed) without children, and 5,070 (or 48.8%) who were part of a couple with children. There were 725 (or 7.0%) people who lived in single parent home, while there are 70 persons who were adult children living with one or both parents, 36 persons who lived in a household made up of relatives, 147 who lived household made up of unrelated persons, and 379 who are either institutionalized or live in another type of collective housing.[7]

The historical population is given in the following table:[3] 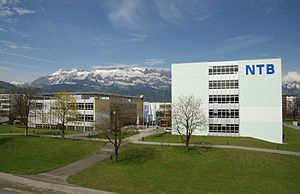 In Buchs about 65.8% of the population (between age 25-64) have completed either non-mandatory upper secondary education or additional higher education (either university or a Fachhochschule).[4] Out of the total population in Buchs, as of 2000[update], the highest education level completed by 2,338 people (22.5% of the population) was Primary, while 3,871 (37.2%) have completed Secondary, 1,035 (10.0%) have attended a Tertiary school, and 505 (4.9%) are not in school. The remainder did not answer this question.[7]

Schloss Werdenberg and Werdenberg lake, looking from Buchs toward Grabs

The region around Schloss Werdenberg, which is shared between Buchs and Grabs, is designated as part of the Inventory of Swiss Heritage Sites.[8]