From Infogalactic: the planetary knowledge core
Jump to: navigation, search
This article is about the baseball player. For the college football coach, see Frank "Buck" O'Neill.

John Jordan "Buck" O'Neil (November 13, 1911 – October 6, 2006) was a first baseman and manager in the Negro American League, mostly with the Kansas City Monarchs. After his playing days, he worked as a scout, and became the first African American coach in Major League Baseball. In his later years he became a popular and renowned speaker and interview subject, helping to renew widespread interest in the Negro leagues, and played a major role in establishing the Negro Leagues Baseball Museum in Kansas City, Missouri.

O'Neil's life was documented in Joe Posnanski's award-winning 2007 book The Soul of Baseball.

Born in rural Carrabelle, Florida, O'Neil was initially denied the opportunity to attend high school due to racial segregation; at the time, Florida had only four high schools specifically for African Americans.[1] However, after working a summer in a celery field with his father, O'Neil left home to live with relatives and attend Edward Waters College in Jacksonville, where he completed high school and two years of college courses. He left Florida in 1934 for several years of semi-professional "barnstorming" experiences (playing interracial exhibition games),.[2] The effort paid off, and in 1937, O'Neil signed with the Memphis Red Sox for their first year of play in the newly formed Negro American League. His contract was sold to the Monarchs the following year.

A World War II tour in the U.S. Navy from 1943–1945 briefly interrupted his playing career.

O'Neil was named manager of the Monarchs in 1948 after Frank Duncan's retirement, and continued to play first base as well as a regular through 1951, dropping to part-time status afterward. He managed the Monarchs for eight seasons from 1948 through 1955 during the declining years of the Negro leagues, winning two league titles and a shared title in which no playoff was held during that period. His two undisputed pennants were won in 1953 and 1955, when the league had shrunk to fewer than six teams.

O'Neil was known to have played full-time in 1951 and as a reserve and pinch-hitter as late as 1955, but Negro leagues statistics for the period 1951 and after are considered extremely unreliable. 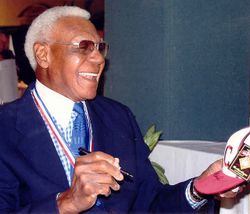 When Tom Baird sold the Monarchs at the end of the 1955 season, O'Neil resigned as manager and became a scout for the Chicago Cubs.[3] He was the first African American scout in Major League Baseball, and was named the first black coach in the major leagues by the Cubs in 1962 and is credited for signing Hall of Fame player Lou Brock to his first contract. O'Neil is sometimes incorrectly credited with also having signed Hall of Famer Ernie Banks to his first contract; Banks was originally scouted and signed to the Monarchs by Cool Papa Bell, then manager of the Monarchs' barnstorming B team in 1949. Banks played briefly for the Monarchs in 1950 and 1953, his play interrupted by Army duty. O'Neil was Banks' manager during those stints, and Banks was signed to play for the Cubs more than two years before O'Neil joined them as a scout.

After many years with the Cubs, O'Neil became a Kansas City Royals scout in 1988, and was named "Midwest Scout of the Year" in 1998.

O'Neil gained national prominence with his compelling descriptions of the Negro leagues as part of Ken Burns' 1994 PBS documentary on baseball. Afterwards, he became the subject of countless national interviews, including appearances on the Late Show with David Letterman and The Late Late Show with Tom Snyder.

In 1990, O'Neil led the effort to establish the Negro Leagues Baseball Museum (NLBM) in Kansas City, and served as its honorary board chairman until his death.

In 1996, O'Neil became the recipient of an Honorary Doctor of Business Administration degree from the University of Missouri - Kansas City in Kansas City, Missouri.

In February 2002, at the end of the NLBM's Legacy Awards annual banquet, O'Neil received an induction ring from the baseball scouts Hall of Fame in St. Louis.[4]

O'Neil and all-star Ichiro Suzuki developed a relationship, with Ichiro attending the Negro Leagues Baseball Museum with O'Neil and seeking O'Neil's knowledge of the game when the Seattle Mariners would have road games in Kansas City. "With Buck, I felt something big. The way he carried himself, you can see and tell and feel he loved this game."[5]

On May 13, 2006, he received an honorary doctorate in education from Missouri Western State University where he also gave the commencement speech.

O'Neil was a member of the 18-member Baseball Hall of Fame Veterans Committee from 1981 to 2000 and played an important role in the induction of six Negro league players from 1995 to 2001 during the time the Hall had a policy of inducting one Negro leaguer per year. O'Neil was nominated to a special Hall ballot for Negro league players, managers, and executives in 2006, but received fewer than the necessary nine votes (out of twelve) to gain admission; however, 17 other Negro league figures were selected.

God's been good to me. They didn't think Buck was good enough to be in the Hall of Fame. That's the way they thought about it and that's the way it is, so we're going to live with that. Now, if I'm a Hall of Famer for you, that's all right with me. Just keep loving old Buck. Don't weep for Buck. No, man, be happy, be thankful.[6]

On July 29, 2006, O'Neil spoke at the induction ceremony for the Negro league players at the Baseball Hall of Fame.[7]

Still playing after all these years 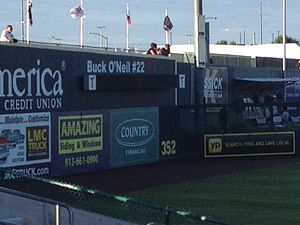 Just before the Hall of Fame ceremonies, O'Neil signed a contract with the Kansas City T-Bones on July 17 to allow him to play in the Northern League All-Star Game. Before the game, O'Neil was "traded" to the Fargo-Moorhead RedHawks and was listed as the starting shortstop, although after drawing an intentional walk, he was replaced before actually playing in the field. At the end of the inning, another "trade" was announced that brought O'Neil back to the Kansas City team, allowing him to lead off the bottom of the inning as well (drawing another intentional walk).

The T-Bones originally claimed that O'Neil, at age 94 years, 8 months, and 5 days, would be by far the oldest person to appear in a professional baseball game (surpassing 83-year-old Jim Eriotes who had struck out in another Northern League game just a week earlier).[8][9] However, that claim was in error, as the Schaumburg Flyers of the Northern League had signed Ted "Double Duty" Radcliffe to a one-game contract and allowed him to face one batter on June 19, 1999 when he was 96 years old.[10] While O'Neil was the second-oldest pro player, the claim was amended that he would be the oldest person to make a plate appearance in a professional baseball game. 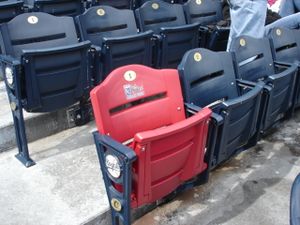 On August 5, 2006, O'Neil was admitted to a Kansas City hospital after complaining that he didn't feel well. He was admitted for fatigue and was released three days later only to be re-admitted September 17. On September 28, Kansas City media reported that O'Neil's condition had worsened.[12][13] On October 6, O'Neil died at the age of 94 of heart failure and bone marrow cancer.[14]

During the ESPN opening day broadcast of the 2007 Kansas City Royals, on April 2, 2007, Joe Morgan announced that the Royals would honor O'Neil by placing a fan in the Buck O'Neil Legacy Seat[15] in Kauffman Stadium each game who best exemplifies O'Neil's spirit. The seat itself has been replaced by a red seat amidst the all-blue seats behind home plate in Section 101, Row C, Seat 1. Due to the renovations and section renumbering in 2009 the seat number is now Section 127, Row C, Seat 9, and the seat bottom is now padded. The first person to sit in "Buck's seat" was Buck O'Neil's brother, Warren.

On December 7, 2006, O'Neil was posthumously awarded the Presidential Medal of Freedom by President George W. Bush;[16] the award was given to his brother, Warren, on his behalf on December 15. He was chosen due to his "excellence and determination both on and off the baseball field," according to the White House news release. He joins such sports notables as Jesse Owens, Muhammad Ali, Jackie Robinson, and Jack Nicklaus in receiving the United States' highest civilian honor. On November 13, 2012 the family of Buck O'Neil donated his Presidential Medal of Freedom to the Negro Leagues Baseball Museum in honor of what would have been O'Neil's 101st birthday. The medal will be showcased in a special area of the NLBM dedicated to O'Neil.[17]

On October 24, 2007, O'Neil was posthumously given a Lifetime Achievement Award named after him. He had fallen short in the Hall of Fame vote in 2006; however, he was honored in 2007 with a new award given by the Hall of Fame, to be named after him. A statue of O'Neil is to be placed inside the Negro Leagues Baseball Museum on 18th and Vine in Kansas City, and the Buck O'Neil Lifetime Achievement Award will be presented no more than every three years.[20]

At the Hall of Fame induction ceremony on July 27, 2008, Joe Morgan gave a dedication speech for the award and talked about O'Neil's life, repeatedly citing the title of O'Neil's autobiography, I Was Right on Time.