Bucknell is a village and civil parish 2 1⁄2 miles (4 km) northwest of Bicester in Oxfordshire, England. The 2011 Census recorded the parish's population as 260.[1]

The present manor house is early 17th century, but was mostly rebuilt in the 19th century.[3][4]

The Church of England parish church of Saint Peter has a central Norman tower. The nave and chancel were enlarged in the 13th century[2] and are Early English Gothic. In the 15th century the bell stage was added to the bell tower and the Perpendicular Gothic clerestory was added to the nave.[5] St Peter's is a Grade I listed building.[6]

St Peter's parish is now part of the Benefice of Bicester, Bucknell, Caversfield and Launton.[8] 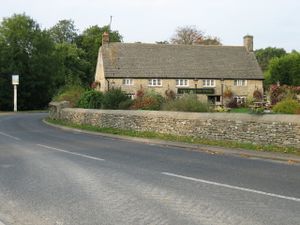 The Trigger Pond pub in Bucknell is 17th-century. The earliest part of the building dates from 1637,[9] and the later part has a date stone from 1693.[10] It is now a gastropub and controlled by Wadworth Brewery.[9] 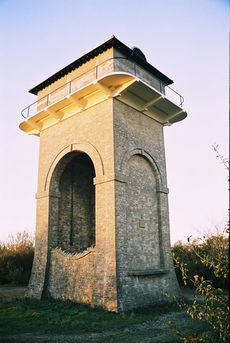 Trow Pool water tower was built in 1909 for Major Hunloke, who then held Bucknell Manor. It served Bucknell village and the Manor estate until the 1950s, when mains water reached Bucknell.[11] The M40 motorway was built through the parish and opened in 1991. It passes very close to the water tower, which is now a landmark for motorway traffic.