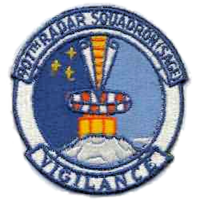 Emblem of the 907th Radar Squadron

Bucks Harbor Air Force Station is a closed United States Air Force General Surveillance Radar station. It is located 7.0 miles (11.3 km) south-southeast of Machias, Maine. It was closed in 1979 by the Air Force, and turned over to the Federal Aviation Administration (FAA).

Bucks Harbor was part of a planned deployment of forty-four Mobile radar stations in 1952, designated as a "Phase I Mobile Radar station". The station was designed to provide protection to Loring AFB. It was originally planned to be located at Corea, Maine, but in 1953 the Navy feared that the proposed site would interfere with a nearby radio interception and direction-finding facility.

Funding, constant site changes, construction, and equipment delivery delayed the completion of Bucks Harbor AFS until 1955 when the 907th Aircraft Control and Warning Squadron (AC&W Sq)was moved from the Manual Air Defense Control Center (ADCC) at Syracuse AFS, NY on 1 March 1956. At Bucks Harbor, the 907th AC&W Sq began operating an AN/MPS-11 radar, and initially the station functioned as a Ground-Control Intercept (GCI) and warning station. As a GCI station, the squadron's role was to guide interceptor aircraft toward unidentified intruders picked up on the unit's radar scopes. In 1959 an AN/FPS-8 came to Bucks Harbor and this set subsequently was converted into an AN/GPS-3. In 1960 two AN/FPS-6A height-finder radars were activated and the site.

During 1959 Bucks Harbor AFS joined the Semi Automatic Ground Environment (SAGE) system, feeding data to DC-05 at Topsham AFS, Maine. After joining, the squadron was redesignated as the 907th Radar Squadron (SAGE) on 1 October 1959. The radar squadron provided information 24/7 the SAGE Direction Center where it was analyzed to determine range, direction altitude speed and whether or not aircraft were friendly or hostile. On 31 July 1963, the site was redesignated as NORAD ID Z-110.

Over the years, the equipment at the station was upgraded or modified to improve the efficiency and accuracy of the information gathered by the radars. By 1963 Bucks Harbor operated with an AN/FPS-24 search radar and AN/FPS-90 and AN/FPS-6B radars. Around 1965 Bucks Harbor became a joint-use facility with the FAA.

Over the next two years preparations were made to turn over the facilities to the State of Maine and the Federal Aviation Administration (FAA). It was designated as Joint Surveillance System (JSS) site J-54. Although the FAA assumed control of the operations area with the inactivation of the 907th, the Air Force continued operating the AN/FPS-90 height-finder radar until 1988. In 1995 the search radar consisted of an AN/FPS-66A radar until 1988 when it was removed.

In the late 1990s the AN/FPS-66A search radar was replaced by the modern ARSR-4 radar. The containment area now is used by the State of Maine as a correctional facility, the housing area being in private ownership.