From Infogalactic: the planetary knowledge core
Jump to: navigation, search
This article is about a commonly cultivated crop plant. For other uses, see Buckwheat (disambiguation). 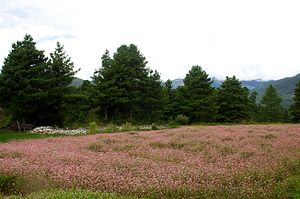 Field of buckwheat in Bumthang (Bhutan)

Buckwheat (Fagopyrum esculentum) is a plant cultivated for its grain-like seeds, and also used as a cover crop. To distinguish it from a related species, Fagopyrum tataricum that is also cultivated as a grain in the Himalayas, primarily in Nepal, Bhutan and India, and from the less commonly cultivated Fagopyrum acutatum, it is also known as Japanese buckwheat[2] and silverhull buckwheat.[2]

Despite the name, buckwheat is not related to wheat, as it is not a grass. Instead, buckwheat is related to sorrel, knotweed, and rhubarb. Because its seeds are eaten and rich in complex carbohydrates, it is referred to as a pseudocereal. The cultivation of buckwheat grain declined sharply in the 20th century with the adoption of nitrogen fertilizer that increased the productivity of other staples.

The name 'buckwheat' or 'beech wheat' comes from its triangular seeds, which resemble the much larger seeds of the beech nut from the beech tree, and the fact that it is used like wheat. The word may be a translation of Middle Dutch boecweite: boec (Modern Dutch beuk), "beech" (see PIE *bhago-) and weite (Mod. Dut. weit), wheat, or may be a native formation on the same model as the Dutch word.[3] 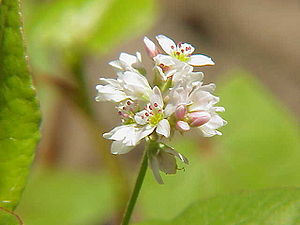 Common buckwheat was domesticated and first cultivated in inland Southeast Asia, possibly around 6000 BCE, and from there spread to Central Asia and Tibet, and then to the Middle East and Europe. Domestication most likely took place in the western Yunnan region of China.[5] Buckwheat is documented in Europe in Finland by at least 5300 BCE [6] as a first sign of agriculture, and in the Balkans by circa 4000 BCE in the Middle Neolithic. In Russian buckwheat is called гречка (grechka) meaning of Greek, due to its introduction in the seventh century by the Byzantine Greeks, the same is the case in Ukrainian.

The oldest known remains in China so far date to circa 2600 BCE while buckwheat pollen found in Japan dates from as early as 4000 BCE. It is the world's highest elevation domesticate, being cultivated in Yunnan on the edge of the Tibetan Plateau or on the plateau itself. Buckwheat was one of the earliest crops introduced by Europeans to North America. Dispersal around the globe was complete by 2006, when a variety developed in Canada was widely planted in China.

Buckwheat is a short-season crop that does well on low-fertility or acidic soils, but the soil must be well drained. Too much fertilizer, especially nitrogen, reduces yields. In hot climates, it can only be grown by sowing late in the season, so that it blooms in cooler weather. The presence of pollinators greatly increases the yield. The nectar from buckwheat flower makes a dark-colored honey. It is sometimes used as a green manure, as a plant for erosion control, or as wildlife cover and feed. 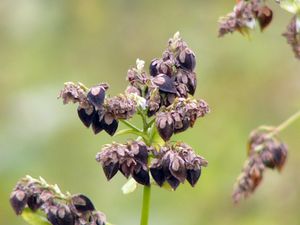 Seed and withered flower of buckwheat

The plant has a branching root system with one primary root that reaches deeply into the moist soil.[7] Buckwheat has triangular seeds and produces a flower that is usually white, although can also be pink or yellow.[8] Buckwheat branches freely, as opposed to tillering or producing suckers, causing a more complete adaption to its environment than other cereal crops.[7] The seed hull density is less than that of water, making the hull easy to remove.[8]

Buckwheat is raised for grain where a short season is available, either because it is used as a second crop in the season, or because the climate is limiting. Buckwheat can be a reliable cover crop in summer to fit a small slot of warm season. It establishes quickly, which suppresses summer weeds.[9] Buckwheat has a growing period of only 10–12 weeks[10] and it can be grown in high latitude or northern areas.[11] It grows 30 to 50  inches (75 to 125 cm) tall.[9]

Salicylaldehyde (2-hydroxybenzaldehyde) was identified as a characteristic component of buckwheat aroma.[26] 2,5-dimethyl-4-hydroxy-3(2H)-furanone, (E,E)-2,4-decadienal, phenylacetaldehyde, 2-methoxy-4-vinylphenol, (E)-2-nonenal, decanal and hexanal also contribute to its aroma. They all have odour activity value more than 50, but the aroma of these substances in an isolated state does not resemble buckwheat.[27]

In a 100 gram serving, buckwheat provides 343 calories and is a rich source (20% or more of the Daily Value, DV) of protein, dietary fiber, four B vitamins and several dietary minerals, with content especially high (47 to 65% DV) in niacin, magnesium, manganese and phosphorus (table). Buckwheat is 72% carbohydrates, including 10% dietary fiber, 3% fat and 13% protein (table). 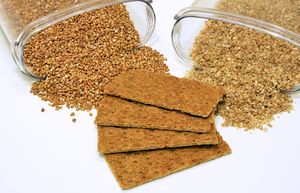 Buckwheat and products made from it 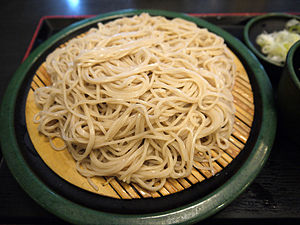 Soba noodles, made from buckwheat flour 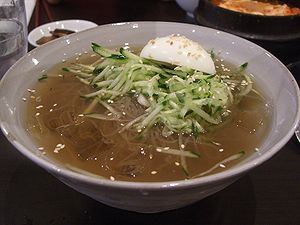 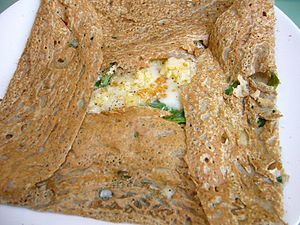 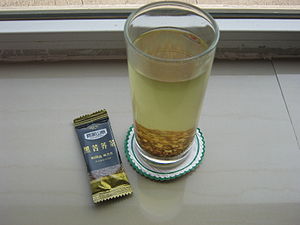 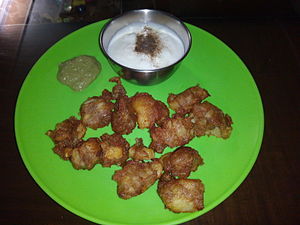 Kuttu ke pakore, a snack made from buckwheat flour, from India

The fruit is an achene, similar to sunflower seed, with a single seed inside a hard outer hull. The starchy endosperm is white and makes up most or all of buckwheat flour. The seed coat is green or tan, which darkens buckwheat flour. The hull is dark brown or black, and some may be included in buckwheat flour as dark specks. The dark flour is known as blé noir (black wheat) in French, along with the name sarrasin (saracen).

Buckwheat noodles have been eaten by people from Tibet and northern China for centuries, as wheat can not be grown in the mountain regions. A special press made of wood is used to press the dough into hot boiling water when making buckwheat noodles. Old presses found in Tibet and Shanxi share the same basic design features. The Japanese and Koreans may have learned the making of buckwheat noodles from them.

In India, on Hindu fasting days (Navaratri, Ekadashi, Janmashtami, Maha Shivaratri etc.), fasting people in northern states of India eat items made of buckwheat flour. Eating cereals such as wheat or rice is prohibited during such fasting days. However, since buckwheat is not a cereal, it is considered acceptable for consumption during Hindu fasting days. While strict Hindus do not even drink water during their fast (observing Nirjal Upwas), others just give up cereals and salt and take a meal prepared from non-cereal ingredients such as buckwheat (kuttu). The preparation of buckwheat flour varies across India. The famous ones are kuttu ki puri (buckwheat pancakes) and kuttu pakoras (potato slices dipped in buckwheat flour and deep-fried in oil). In most of northern and western states, buckwheat flour is called kuttu ka atta.

Buckwheat noodles play a major role in the cuisines of Japan (soba),[31] Korea (naengmyeon, makguksu and memil guksu) and the Valtellina region of Northern Italy (pizzoccheri). Soba noodles are the subject of deep cultural importance in Japan. In Korea, guksu (noodles) were widely made from buckwheat before it was replaced by wheat.[citation needed] The difficulty of making noodles from flour with no gluten has resulted in a traditional art developed around their manufacture by hand.

Buckwheat groats are commonly used in western Asia and eastern Europe. The porridge was common, and is often considered the definitive peasant dish. It is made from roasted groats that are cooked with broth to a texture similar to rice or bulgur. The dish was brought to America by Ukrainian, Russian, and Polish immigrants who called it kasha, and they mixed it with pasta or used it as a filling for cabbage rolls, knishes, and blintzes, hence buckwheat prepared in this fashion is most commonly called kasha in America. Groats were the most widely used form of buckwheat worldwide during the 20th century, eaten primarily in Estonia, Russia, Ukraine, and Poland, called grechka in Ukrainian or Russian. The groats can also be sprouted and then eaten raw or cooked.

Buckwheat pancakes, sometimes raised with yeast, are eaten in several countries. They are known as buckwheat blinis in Russia, galettes in France (savoury crêpes made with buckwheat flour, water, and eggs are associated with Lower Brittany, whilst savoury galettes made without eggs are from Higher Brittany), ployes in Acadia, and boûketes (which are named after the buckwheat plant) in the Wallonia region of Belgium. Similar pancakes were a common food in American pioneer days.[32] They are light and foamy. The buckwheat flour gives them an earthy, mildly mushroom-like taste. In Ukraine, yeast rolls called hrechanyky are made from buckwheat. Buckwheat flour is also used to make Nepali dishes such as dhedo and kachhyamba.

Farina made from groats are used for breakfast food, porridge, and thickening materials in soups, gravies, and dressings. In Korea, buckwheat starch is used to make a jelly called memilmuk. It is also used with wheat, maize (polenta taragna in northern Italy) or rice in bread and pasta] products.

Buckwheat contains no gluten,[34] and so it may be eaten by people with celiac disease or gluten allergies. Many bread-like preparations have been developed. Buckwheat might possibly contain some proteins similar to those found in wheat gluten, but buckwheat, quinoa, or amaranth eaten in moderation apparently do not cause problems for most celiac disease patients.[35] Furthermore, alcohol-soluble "buckwheat proteins bear little molecular similarity to wheat prolamins and therefore their description as 'gluten' or 'gliadin' is unfortunate and can lead to unnecessary exclusion of valuable sources of dietary protein in gluten-sensitive individuals."[36] However unlikely, buckwheat can become contaminated with nearby wheat gluten if care is not taken during the growing, milling and processing phases in the supply chain.[36] Buckwheat is approved for the Gluten Free diet in Canada, Europe and Australia.[36]

Light sensitivity, called "fagopyrism", can result from the fagopyrin in buckwheat. The symptoms are a rash on exposure to sunlight. Buckwheat leaves contain far more fagopyrin than the grain, so this condition primarily occurs in animals that graze buckwheat, but has also been reported from people who eat large amounts of buckwheat sprouts, or drink buckwheat-sprout juice.

In recent years, buckwheat has been used as a substitute for other grains in gluten-free beer. Although it is not an actual cereal (being a pseudocereal), buckwheat can be used in the same way as barley to produce a malt that can form the basis of a mash that will brew a beer without gliadin or hordein (together gluten) and therefore can be suitable for coeliacs or others sensitive to certain glycoproteins.[37]

A buckwheat-only whisky, Eddu Silver[38] and Eddu Gold, is distilled by the French Distillerie des Menhirs[39] in Brittany near Quimper. The buckwheat is malted and fermented similar to buckwheat beer, but is then distilled and aged in French oak casks.[40] A blended whisky, Eddu Grey Rock,[41] is also produced. Ed-du is Breton for buckwheat.

Buckwheat shōchū (そば焼酎, sobajōchū?) is a Japanese distilled beverage. It has been produced since the 16th Century. Unkai Brewery Co. of Gokase, Miyaz developed it using buckwheat from the local mountainous region as its base ingredient. Since then shōchū producers across Japan have produced it, sometimes as part of a shōchū blend. The taste is milder than barley shōchū. 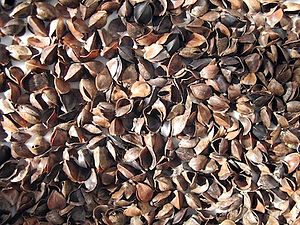 Buckwheat hulls are used as filling for a variety of upholstered goods, including pillows and zafu. The hulls are durable and do not conduct or reflect heat as much as synthetic fills. They are sometimes marketed as an alternative natural fill to feathers for those with allergies. However, medical studies to measure the health effects of buckwheat hull pillows manufactured with unprocessed and uncleaned hulls, concluded such buckwheat pillows do contain higher levels of a potential allergen that may trigger asthma in susceptible individuals than do new synthetic-filled pillows.[42][43]

Buckwheat is currently being studied and used as a pollen and nectar source to increase natural predator numbers to control crop pests in New Zealand.[44]

The buckwheat plant is celebrated in Kingwood, West Virginia, at the Preston County Buckwheat Festival, where people can participate in swine-, cattle-, and sheep-judging contests, vegetable contests, and craft fairs. The area fire departments also play an important role in the series of parades that occur there. Each year, a King Buckwheat and Queen Ceres are elected. Also, many rides are available, and homemade, homegrown buckwheat cakes and sausage are served.