From Infogalactic: the planetary knowledge core
(Redirected from Bucrania)
Jump to: navigation, search 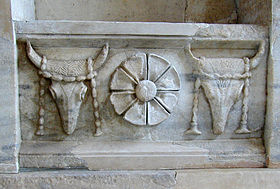 Garlanded bucrania on a frieze from the Samothrace temple complex

Bucranium, plural bucrania (Latin, from Greek βουκράνιον, referring to the skull of an ox) was a common form of carved decoration in Classical architecture used to fill the metopes between the triglyphs of the frieze of Doric temples. A bas-relief or painted decor consisting of a series of ox-skulls draped or decorated with garlands of fruit or flowers was a Roman motif drawn from marble altars, which have survived in some number; the motif was also later used on Renaissance, Baroque and Neoclassical buildings. The name is generally considered to be a reference to the practice of garlanding sacrificial oxen, the heads of which were displayed on the walls of the temples, a practice with a long history reaching back to the sophisticated Neolithic site of Çatalhöyük in eastern Anatolia, where cattle skulls were overlaid with white plaster.

A rich and festive Doric order was employed for the Basilica Aemilia on the Forum Romanum at Rome; enough of it was standing for Giuliano da Sangallo to make a drawing, c 1520, reconstructing the facade (Codex Vaticano Barberiniano Latino 4424); the alternation of the shallow libation dishes called paterae with bucrania in the metopes reinforce the solemn sacrificial theme. With time, during the sixteenth century, the connection with sacrifices faded and bucrania became part of a decorative vocabulary that evoked "Roman-ness".

In serious, visually literate contexts, the presence of bucrania always signifies that the Doric order is the organizing principle, but in a first-century fresco from Boscoreale, protected by the eruption of Vesuvius and now at the Metropolitan Museum, bucrania and cistae mysticae hang on ribbons from pegs that support garlands, evoking joyous fasti.

Garlanded bucrania provide a repetitive motif in the plasterwork of the fine 18th century Staircase Hall of The Vyne (Hampshire), inside the Pantheon at Stourhead (Wiltshire) and at Lacock Abbey (Wiltshire).