Budin Eyalet (also known as Province of Budin / Buda or Pashaluk of Budin / Buda; Ottoman Turkish: ایالت بودین; Eyālet-i Būdīn‎,[1] Hungarian: Budai vilajet, Serbian: Budimski vilajet or Будимски вилајет, Croatian: Budimski vilajet) was an administrative unit of the Ottoman Empire in Central Europe and the Balkans. It was formed on the territories that Ottoman Empire conquered from the medieval Kingdom of Hungary and Serbian Despotate. The capital of the Budin Province was Budin (Hungarian: Buda).

Population of the province was ethnically and religiously diverse and included Hungarians, Croats, Serbs, Slovaks, Muslims of various ethnic origins (living mainly in the cities) and others (Jews, Romani, etc.). 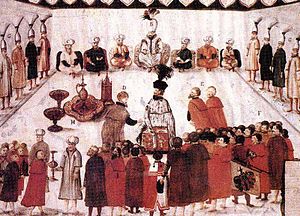 The pasha of Budin receives the envoy of the Ottoman Sultan. 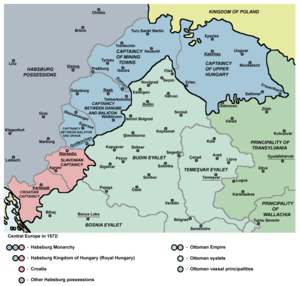 Northern part of Budin Eyalet in 1572.

In 1541, Suleyman decided to consolidate the conquered Buda area and to set it up as an organic part of the Empire. He drove away the Austrian commander Roggendorf, besieging the city, and on 29 August 1541 he took control of the city with a trick; together with the city on the other side of Danube, Pest. He immediately organised the first Central European vilajet (province) with capital in Buda (Budin in Turkish).

The same year, several other cities fell under Ottoman rule: Szeged, Kalocsa, Szabadka (Serbian: Sabatka, modern Subotica). In the years 1543-44, the Ottomans conquered the fortresses of Nógrád, Vác, Fehérvár, Pécs and Siklós which were embedded into the new vilajet.[3]

In 1552 the vilajet was expanded with new territories in the North, and the new Vilajet of Temeşvar (Romanian: Timişoara) was established. Military control of the surrounding areas was driven from Budin.[4]

The following year, the advance of the Ottomans slowed down and the territory of the Budin vilajet did not change until the ending of the Fifteen Years War and the Peace of Zsitvatorok, where the Ottomans lost territories North of Nógrád. However Eğri and Kanije were captured during these wars and were shortly managed as sanjaks in this province.[3]

The territory of the eyalet was significantly reduced in size with the establishment of the eyalets of Eğri (1596) and Kanije (1600).[5] Nevertheless, it remained the foremost Ottoman province in Central Europe, owing to the strategic importance of Budin as a major port on the Danube.[6]

In the 17th century Kara Mustafa conquered more vast areas from the Habsburg Kingdom of Hungary and its vassal Principality of Transylvania, but did not succeed in conquering Vienna in 1683. This failed attempt heralded the gradual decline of Ottoman power in Europe. On 2 September 1686 Budin was captured by the troops of the Holy League.

Military conflicts were a regular occurrence on the Ottoman-Habsburg border, so there was a constant need of a significant military presence. If the sultan or the great commander was not present, then the post of general commander was taken by the pashas of Budin. His power was enlarged to the vilajet of Temeşvar (from 1552), Eğri (from 1596), Kanije (from 1600) and to Varad (from 1660).

The title of the Budin pasha was enhanced to be the great commander from 1623.

The number of the troops in the province at this time is difficult to estimate. There are documents to show 10,200 soldiers in the fortresses in 1546, and 12,451 soldiers in 1568. Auxiliary troops called spahi's were also present, but no accurate figures are available. The cost of maintaining this large force put pressure on the budget of the province. In 1552, for example, the Porte sent 440,000 gold coins to Budin to provision the army.[7]

The Ottoman Empire put all efforts to strengthen the stronghold at Budin. They built several rings of defence around Budin and defended roads for supplies to Vienna, as their aim was to crush the capital of the Habsburgs, which they did not succeed.

The most important fortresses around Budin were Esztergom, Székesfehérvár, and also less important Vác and Visegrád. To the south, the most relevant fortress was Szigetvár.

In the 145 years Ottoman era, the city of Budin was not converted to the "Italian" type of defensive fortress, which was in the fashion at that time.[8] The old fortress was enlarged by the "Víziváros" walls and a small stronghold was built on the Gellért hill.

The Budin Castle was already standing on a Medieval castle, with more or less same walls as per now. Various towers were built by Ottomans i.e. "Murad pasha tower" (Murad pasha kulesi) between 1650 and 1653. The walls were enlarged in Gellért hill, in Rózsadomb, Nap-hegy and on the side of the Danube. The main castle was also walled inside, where they have made small openings so that the sentry could move easily.[8]

In about 1566, province included following sanjaks:[10][not in citation given]

In about 1600, province included following sanjaks:[9]

Before the end of Ottoman administration (i.e. before 1699), province included following sanjaks:[9]