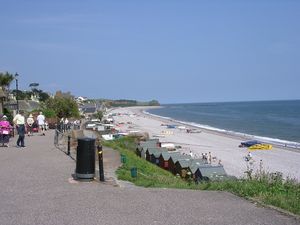 Budleigh Salterton is a small town on the coast in East Devon, England, 15 miles south-east of Exeter. It is situated within the East Devon Area of Outstanding Natural Beauty.[1] It is a major part of the electoral ward of Budleigh. The ward population at the 2011 census was 5,967.[2]

Budleigh Salterton lies at the mouth of the River Otter, where the estuary forms an area of reed bed and grazing marsh: an important haven for migratory birds and a Site of Special Scientific Interest for those interested in bird watching. It has a designated area for naturists.[3]

Budleigh Salterton lies on the South West Coast Path, with clifftop routes eastwards to Sidmouth and westwards to Exmouth. The pebble beach and cliffs are part of the Jurassic Coast World Heritage site. The Jurassic Coast stretches over a distance of 153 kilometres (95 mi), from Orcombe Point near Exmouth in the west to Old Harry Rocks on the Isle of Purbeck in the east.[4] The coastal exposures along the coastline provide a continuous sequence of Triassic, Jurassic and Cretaceous rock formations spanning approximately 185 million years of the Earth's history. The Jurassic Coast contains a large range of important fossil zones. The area is known for radioactive nodules containing vanadium and uranium in red marl at Littleham Cove.[5]

Fairlynch Museum is housed in a listed, thatched marine cottage orné dating from 1811. It covers the history and geology of the region, and opened in 1967, offering exhibitions and a local archive. It possesses a large collection of period costumes.[6] The town has a male-voice choir, which performs for charity.[7]

Budleigh Salterton lies on the B3178 and the B3179 ends on the western edge of the town. It is served by three bus routes: The Coasthopper 157 (hourly) to towns Exmouth and Sidmouth, the 357 (hourly to Exmouth, also forming the local town service), the 58 every two hours to Exeter and the 57C (one journey each way) to Exeter and Bicton College. Between 1897 and 1967, Budleigh Salterton was served by a station on the Budleigh Salterton Railway, a line built and operated by the London and South Western Railway, which ran from Tipton St Johns to Exmouth,[8] which is now the nearest railway station (8 km).

Budleigh Salterton is home to the scenic East Devon Golf Club,[9] and to a croquet club (offering croquet, bowls and bridge) founded in the late 1860s.[10] The first team of the Budleigh Salterton Association Football Club plays in the South West Peninsula League Division One East. The club also has a second team, a ladies' team and a youth team.[11] In addition, there is a cricket club, a rifle club, and a games club offering tennis, bowls and other pursuits.[12]

Budleigh Salterton Anglicans were originally served by a chapel of ease that came under the parish of All Saints, East Budleigh. As the population grew, this was replaced in the 1890s by what became the parish church of St Peter in 1901. The church was heavily damaged by enemy aircraft bombing on 17 April 1942, but reopened in 1953. Today the Raleigh Mission Community at St Peter’s, Budleigh Salterton, and All Saints, East Budleigh, are part of a joint mission with St Michael’s, Otterton.[13]

The Roman Catholic Church is also dedicated to St Peter.[14] The Temple Methodist Church was completed in 1904, to replace an earlier, smaller chapel dating from 1812, built by the bookseller James Lackington, an associate of John Wesley.[15] There is a Baptist church in the town, whose congregation dates back to 1843.[16]

Writer Dame Hilary Mantel, author of Wolf Hall and Bring Up the Bodies, dwells in the town.[17] It is also the home of (the fictional) BBC Radio 4 comic character Giles Wemmbley-Hogg.