From Infogalactic: the planetary knowledge core
(Redirected from Budweis)
Jump to: navigation, search

České Budějovice (Czech pronunciation: [ˈt͡ʃɛskɛː ˈbuɟɛjovɪt͡sɛ]; German: Budweis or Böhmisch Budweis; sometimes referred to as Budweis in English) is a statutory city in the Czech Republic. It is the largest city in the South Bohemian Region as well as its political and commercial capital, the seat of the Roman Catholic Diocese of České Budějovice, the University of South Bohemia, and the Academy of Sciences. It is located in the center of a valley of the Vltava River, at the confluence with the Malše.

České Budějovice, which is located in the historical province of Bohemia, is not to be confused with Moravské Budějovice in Moravia. 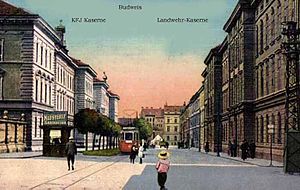 The city was founded by the King Ottokar II of Bohemia, and was granted its municipal charter in 1265. The siting and planning of the city was carried out by the king's knight Hirzo. The royal city was created as a platform of the king's power in South Bohemia and to counterbalance the powerful noble House of Rosenberg, which became extinct in 1611.

In 1341, King John of Bohemia allowed Jewish families to reside within the city walls, and the first synagogue was built in 1380; however several pogroms occurred in the late 15th and early 16th century. Since the Hussite Wars, the city was traditionally a bulwark of the Catholic Church during the long-lasting religious conflicts in the Kingdom of Bohemia. A part of the Habsburg Monarchy from 1526, Budejovice remained a loyal supporter of Emperor Ferdinand II in the Thirty Years' War. Budějovice underwent a short occupation by Prussia during the Silesian Wars and the war between the Habsburgs and the French army in 1742.

In 1762, the Piarists established a gymnasium here and Emperor Joseph II founded the diocese in 1785. In 1847, the production of Koh-i-Noor Hardtmuth pencils was relocated from Vienna to Budějovice.

During the Second World War in March 1945, Budějovice was twice targeted by U.S. Air Force raids that greatly damaged the city and caused great loss of life. At the end of the war, on 9 May 1945, Soviet troops liberated the city. On the following day, the Red Army and the American Army met on the main square in a joint celebration of the city's liberation.

Development of the city population since 1869:[3]

Low-lying city spreads mostly in the plains making it nearly flat in the inner parts with hillier areas in the eastern suburbs. The lowest point lies 375 meters ASL (1233 feet) and the highest point at 452 meters ASL (1483 feet). For it is not very well ventilated some strong frosts do occur; the strongest frost plummeted to −42.2 °C (−44.0 °F) in 1929 in the southern part of Budweis with lower temperatures elsewhere in the meantime. Nevertheless, such a strong frost is something exceptional, especially outside of valley bottoms.

Budweis has cooler and wet inland version of temperate Oceanic climate (Cfb) with average annual temperature 8.3 °C (46.9 °F). There are profound four seasons with murky dry winter between early December and early March, sunny and wetter spring between half of March up to half of May changing to rainy and warm summer during late May and early September when start dry autumn lasting to late November. There is between 1550 and 1800 hours of sunshine in most years. 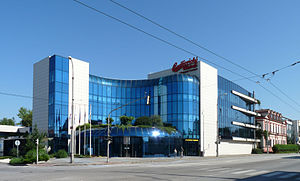 Budějovice has long been well known for the beer brewed there since the 13th century. For a time, the town was the imperial brewery for the Holy Roman Emperor, and Budweiser Bier (i.e. beer from Budweis) became,[5] along with Pilsner from Plzeň, one of the best-known lagers. Brewing remains a major industry.

The largest brewery, founded in 1895, is "Pivovar Budějovický Budvar" (Budweiser Budvar Brewery) which has legal rights to market its beer under the "Budweiser" brand name in much of Europe. The same product is also sold elsewhere under the names "Budvar" and "Czechvar" due to legal disagreements with Anheuser-Busch over the Budweiser brand. The American lager was originally brewed as an imitation of the famous Bohemian original, but over time has developed its own identity and attained remarkable commercial success. Anheuser-Busch has made offers to buy out the Czech brewing company in order to secure global rights to the name "Budweiser", but the Czech government has refused all such offers, regarding the Czech Budweiser name as a matter of national pride.

The oldest (founded in 1795) and second largest brewery was renamed to "Pivovar Samson", replacing its original German name "Budweiser Bürgerbräu" during the communist period. It also exported, mostly under the "Samson" and "Crystal" labels. Recently, they reacquired naming rights for Budweiser for Europe while offering "B. B. Bürgerbräu" in the US since 2005. 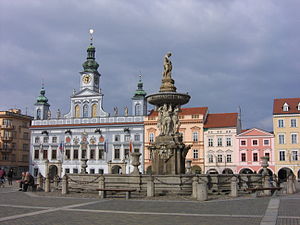 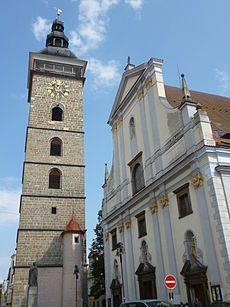 The Black Tower and St. Nicholas Cathedral on the opposite corner of the square

The old town preserves interesting architecture from the Gothic, Renaissance, Baroque, and 19th century periods. This includes buildings around the large Ottokar II Square ("Náměstí Přemysla Otakara II"), the old Town Hall with murals and bronze gargoyles, and the 16th century Black Tower (Černá věž). The most valuable historic building in České Budějovice is the Dominican convent with the Gothic Presentation of the Virgin Mary church from the 13th century, on Piaristic Square.

The Museum of South Bohemia holds a large collection of historic books, coins, and weapons. It is closed for reconstruction in 2012-2015.

In the new town, the Belle Époque Austro-Hungarian train station is notable. The horse-drawn railroad line connecting České Budějovice to Linz was the second oldest public line in continental Europe (after the St.Etienne-Andrézieux line in France), constructed from 1824 to 1832; traces of the line can be seen south of the city center.

The ruins of the home castle of the Czech national hero Jan Žižka, Trocnov (now part of Borovany), are located some ten kilometres (6 miles) southeast of the town. A bit further away (about 30 km), the town of Český Krumlov is another popular tourist destination in South Bohemia. In 1992, it was added to the UNESCO list of World Heritage Sites. 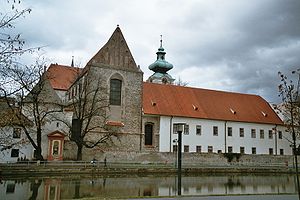 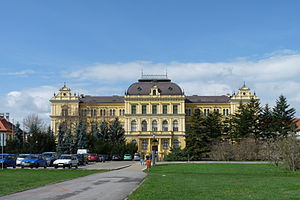 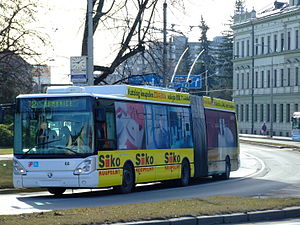 It was the birthplace of:

The city is also one of the major settings in the novel "The Good Soldier Švejk" by Jaroslav Hašek. Budějovice is the setting and was the working title for the play The Misunderstanding by Albert Camus

Local buses and trolleybuses take passengers to most areas of the city. The city can be reached from other locations by inter-city buses and by train. Internationally, a direct railroad built by the Austrian Empress Elisabeth Railway company in 1871, connecting the Czech capital Prague with Zürich, via Linz and Salzburg, also makes a stop in České Budějovice. The town will receive access to the planned D3 motorway running from Prague to Kaplice. A public domestic airport is located 4 km south-west from České Budějovice, at the nearby village of Planá. 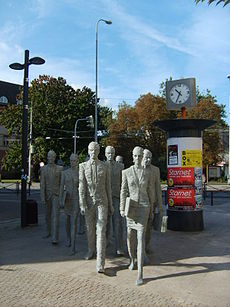 České Budějovice is twinned with: