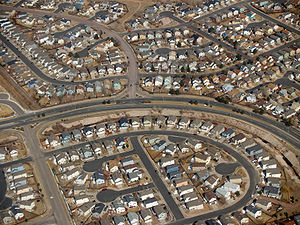 In social science, the term built environment refers to the human-made surroundings that provide the setting for human activity, ranging in scale from buildings and parks or green space to neighborhoods and cities that can often include their supporting infrastructure, such as water supply or energy networks. The built environment is a material, spatial and cultural product of human labor that combines physical elements and energy in forms for living, working and playing. It has been defined as "the human-made space in which people live, work, and recreate on a day-to-day basis."[1] The "built environment encompasses places and spaces created or modified by people including buildings, parks, and transportation systems." In recent years,[when?] public health research has expanded the definition of "built environment" to include healthy food access, community gardens, "walkability" and "bikability."[2]

Early concepts of built environment date to Classical Antiquity: Hippodamus of Miletos, known as the "father of urban planning,"[by whom?] developed Greek cities from 498 BC to 408 BC that created order by using grid plans that mapped the city. These early city plans eventually gave way to the City Beautiful movement in the late 1800s and early 1900s, inspired by Daniel Hudson Burnham, a reformist for the Progressivism movement who actively promoted "a reform of the landscape in tandem with political change."[3] The effort was in partnership with others who believed that beautifying American cities would improve the moral compass of the cities and encourage the upper class to spend their money in cities. This beautification process included parks and architectural design.[4]

Currently built environments are typically used to describe the interdisciplinary field that addresses the design, construction, management, and use of these man-made surroundings as an interrelated whole as well as their relationship to human activities over time (rather than a particular element in isolation or at a single moment in time). The field is generally not regarded as a traditional profession or academic discipline in its own right, instead drawing upon areas such as economics, law, public policy, public health, management, geography, design, technology, and environmental sustainability. Within the field of public health, built environments are referred to as building or renovating areas in an effort to improve the community’s well-being through construction of “aesthetically, health improved, and environmentally improved landscapes and living structures”.[5] For example; community forest user group in Nepal is multidimensional institution, which serves goods and services to the communities through natural resource management. 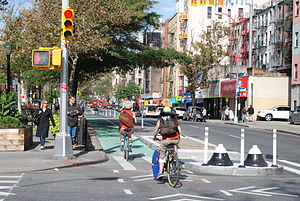 Neighborhoods with more walkability had lower rates of obesity as well as increased physical activity among its residents. They also had lower rates of depression, higher social capital, and less alcohol abuse. Walkability features in these neighborhoods include safety, sidewalk construction, as well as destinations in which to walk.[6] In addition, the perception of a walkable neighborhood, one that is perceived to have good sidewalks and connectivity, is correlated with higher rates of physical activity.[7]

Assessments of walkability have been completed through the use of GIS programs. One such program, Street Smart Walk Score, is a walkability assessment tool which determines distances to grocery stores and other amenities, as well as connectivity and intersection frequency using specific addresses.[8] Assessments such as Street Smart Walk Score can be utilized by city and country planning departments to improve existing walkability of communities. 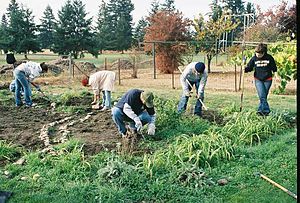 Public health also addresses additional components of built environments including “bikeability” and healthy food access such as proximity to grocery stores and community gardens. Bikeability refers to the access that an area has granted to safe biking through multiple bike paths and bike lanes.[9] Both walkability and bikeability have been cited as determinants of physical activity.[10]

Access to healthy food is also an important component of the built environment. A higher density of convenience stores has been associated with obesity in children.[11] In contrast, improved access to community supermarkets and farmer’s markets is correlated with lower overweight status.[12] Specifically in low income neighborhoods, the presence of a local grocery store is correlated with lower BMI/overweight risk.[13] Community gardens are also considered a part of the built environment, and have been shown to increase fruit and vegetable intake among gardeners.[14] Scholars say that community gardens have also been shown to have positive social and psychological impacts that lead to lower levels of stress, hypertension, and an improved sense of wellness, affecting the overall health of the individual and the community.

The intersection of public health with other disciplines is evident in the design process of built environments which includes environmental planning, policy development and land-use planning.[1] Research suggests that people are more active in mixed-use communities or those that incorporate retail and residential and densely populated areas as well as those with good street connectivity.[15] Those who preferred to walk and live in walkable environments often have lower obesity rates and drive less over those who preferred living in auto-dependent environments.[16] The strength of the evidence for reducing obesity through environment has been highlighted by the Center for Disease Control in its Common Community Measures for Obesity Prevention Project, which includes measures of healthy food access and physical activity environments.[17]