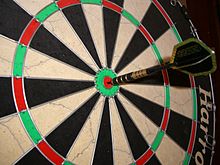 A dart in a double bullseye
File:Archery Target 80cm.svg
The "Gold" is the yellow circle at the centre of this archery target

The bullseye, or bull's-eye, is the centre of a target, and by extension the name given to any shot that hits the bullseye. By extension, the word bullseye can refer to any design or pattern featuring prominent concentric circles, visually suggesting an archery target, and "hitting the bullseye" is a term for an unexpectedly good success.

In archery the term bullseye is not used, the centre being referred to as the Gold. Hitting the most central ring of an international target is worth 10 points, or an Imperial target 9 points in target archery.

In darts it is 5 foot 8 inches (1.73m) above the floor.[1] Before the start of a match players usually throw closest to the bull to decide who has the advantage of throwing first. A "double bullseye" is a smaller, inner circle and counts for 50 points while an outer bull is worth 25 points.[2] Two treble 20's when combined with a double bullseye is worth 170 points in darts which is the highest possible checkout. In the World Prix which has a double start format a double bullseye can begin a leg.

Hitting three bullseyes in darts is known as the "Alan Evans shot".[3] So far 3 televised nine dart finishes have included a double bullseye.