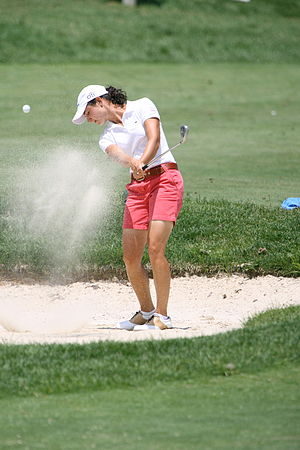 A hazard is an area of a golf course in the sport of golf which provides a difficult obstacle, which may be of two types: (1) water hazards such as lakes and rivers; and (2) man-made hazards such as bunkers. Special rules apply to playing balls that fall in a hazard. For example, a player may not touch the ground with his club before playing a ball, not even for a practice swing. A ball in any hazard may be played as it lies without penalty. If it cannot be played from the hazard, the ball may be hit from another location, generally with a penalty of one stroke. The Rules of Golf govern exactly from where the ball may be played outside a hazard. Bunkers (or sand traps) are shallow pits filled with sand and generally incorporating a raised lip or barrier, from which the ball is more difficult to play than from grass.[1] 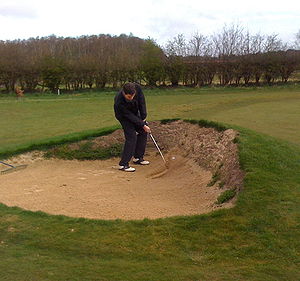 A golfer hitting from a greenside bunker

A bunker is a depression near the green or fairway that is usually filled with sand. It is difficult to hit the ball out of the bunker and entering it is therefore considered punitive to a golfer who misses the target with the previous shot. A club called a "sand wedge" is designed for extracting the ball from a bunker, a process requiring well-developed skill. After a player is done using the bunker, it is the job of either the player or that player's caddy to rake the area of the sand disturbed during play. Specific rules of golf govern play from a bunker. For example, a player may not ground one's club in a bunker; that is, the club cannot touch the ground prior to the swing.

There are three types of bunkers used in golf course architecture and all are designed to be impediments to the golfer's progress toward the green. Fairway bunkers are designed primarily to gather up wayward tee shots on par 4 and par 5 holes; they are located to the sides of the fairway or even in the middle of the fairway. Greenside bunkers are designed to collect wayward approach shots on long holes and tee shots on par 3 holes; they are located near and around the green. Waste bunkers are natural sandy areas, usually very large and often found on links courses; they are not considered hazards according to the rules of golf, and so, unlike in fairway or greenside bunkers, golfers are permitted to ground a club lightly in, or remove loose impediments from, the area around the ball.[2]

Water hazards, like bunkers, are natural obstacles designed to add both beauty and difficulty to a golf course. Water hazards are typically either streams or ponds, situated between the teeing ground and the hole.