Burgas Airport (IATA: BOJ, ICAO: LBBG), (Bulgarian: Летище Бургас, Letishte Burgas) is an airport in southeast Bulgaria and the second largest airport in the country. The airport is located near to the north neighbourhood of Burgas, Sarafovo almost 10 kilometres from the city centre. Between the airport and the city centre is located the Lake Atanasovsko. The airport serves Burgas and seaside resorts of Bulgarian south coast. In 2014, the airport handled 2,522,319 passengers, a 2.0% increase compared to 2013.

On 27 June 1937 the French company CIDNA (now part of Air France), chose the area of Burgas Airport to build a radio station and signed a contract with the Bulgarian government for its use. The contract expressly stated that the staff of Burgas Airport would be Bulgarian.

On 29 June 1947, Balkan Bulgarian Airlines began domestic flights between Burgas, Plovdiv and Sofia, using Junkers Ju 52/3m aircraft. In the 1950s and 1960s the airport was expanded and modernized by building a concrete runway. In 1970, the airport became an international airport serving 45 destinations.[1]

Burgas airport has been subject to heavy traffic following the growing tourism industry in Bulgaria and was in need of major investments to expand and handle projected passenger traffic. In June 2006, the Bulgarian Government awarded Fraport AG Frankfurt Airport Services Worldwide a 35-year-long concession on both Varna and Burgas airports in return for investments exceeding €500 million.

Fraport entered into partnership with Varna-based company BM Star. The concessionaire has vowed to inject 403 million Euro in the two airports during the lifespan of the arrangement. Fraport will pay 60% of an investment of EUR 403 million over the 35-year concession. The investments will be made in new terminal facilities, vehicles and equipment and expanding apron areas at the airports over the life of the concession

Only Terminal 2 is handling passenger traffic at Burgas Airport. Terminal 1, which was built in the 1950s and expanded in the early 1990s, had become functionally obsolete and ceased operations in late 2013 following the opening of the new state-of-the-art Terminal 2, which now handles the entire airport passengers traffic. The terminal is equipped with 31 check-in counters, three boarding-card checkpoints, nine security lanes and eight departure gates. The arrivals area (divided into Schengen and non-Schengen zones) has 12 immigration stations and four baggage carousels (one 120 metres (390 ft) long and three 70 metres (230 ft) long carousels). Passenger amenities include 800 square metres (8,600 sq ft) of space dedicated to shopping and 1,220 square metres (13,100 sq ft) for food and beverage (F&B) services. There is also a 550 square metres (5,900 sq ft) outdoor courtyard.

Burgas Airport has the fourth runway length on the Balkans (3,200 metres (10,500 ft)) after Athens Airport, Sofia Airport and Belgrade Airport.

There are domestic and international flights to about 109 destinations in 31 countries, by more than 57 Bulgarian and foreign airlines (season 2015). The busiest season for the airport is from the end of April to the beginning of October. 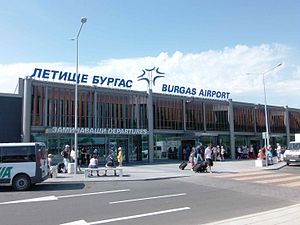 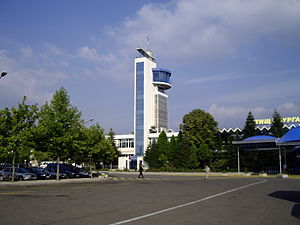 Line No 15 (Bus-stop: located at the entrance of the airport area).Initial and final bus stops in Burgas – Burgas bus station "South".[16]

The Taxi Piazza is located in front of the Arrivals Terminal at Burgas Airport. A taxi ride from Burgas Airport to the city takes approx 15 minutes, depending on the traffic intensity.[17]

Passengers and guests arriving at Burgas Airport with their personal car can use the commercially available parking lot, located in the immediate vicinity of the main terminal building. The parking lot has 199 car spaces available and is accessible 24 hours a day.[18]