From Infogalactic: the planetary knowledge core
Jump to: navigation, search
For other uses, see Burgdorf (disambiguation).

Burgdorf (French: Berthoud) is the largest city in the Emmental in the canton of Bern in Switzerland. It was the capital of the district of the same name until 2010, when it became part of the new Emmental district.[3] 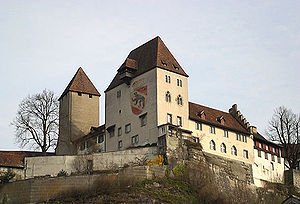 Scattered archeological finds indicate that the area around Burgdorf was inhabited during the Neolithic era, the Late Bronze Age and the Hallstatt.

During the High Middle Ages the land that would become Burgdorf was owned by the Kingdom of Burgundy and then after 1080 by the Dukes of Zähringen. Either the kings or the dukes built a castle on the left bank of the Emme river. Burgdorf is first mentioned in 1236 as in oppido Burchtorff, while Burgdorf Castle is mentioned in 1080 as castellum Bertoldi ducis.[4] The Zähringen dukes built a city (upper-west city section) around the castle in the last quarter of the 12th century. After the extinction of Zähringen line, Burgdorf passed to the Counts of Kyburg. They expanded the city in 1278 with the upper-east section and between 1278 and 1300 absorbed the Holzbrunnen settlement which became the lower town. By 1300 the city had expanded to fill the town walls. Starting in 1323 there was a ban on construction within the walls, which marked the border of the city until 1800. Under the Kyburg or Neu-Kyburg Counts, Burgdorf Castle was the capital of the county, and the Counts were the mayors of Burgdorf town.

In the 14th century, the Neu-Kyburgs became increasingly indebted. On 11 November 1382, Count Rudolf II of Neu-Kyburg, launched a raid against the city of Solothurn to try and force the city to forgive his debts. For the city of Bern, this attack on an allied city represented an excellent opportunity for the city to break its ties with the Neu-Kyburgs. In March 1383 the Bernese-Solothurn army marched on Burgdorf. This army was supported with troops from the Forest Cantons, Lucerne, Zurich, Neuchatel and Savoy and were armed with catapults and primitive guns. Because Count Rudolf II had died before the war began, Burgdorf was defended by Rudolf's uncle, Berchtold I. Under Berchtold, Burgdorf withstood a 45-day siege. An attempt to negotiate a cease-fire on 21 April 1383, between Bern and the citizens of Burgdorf against the Neu-Kyburgs was also unsuccessful. Beset by enormous burdens of war and civil unrest at home, the Bernese Council sought Confederation mediation to end the war. On 5 April 1384, the Neu-Kyburgs agreed to sell the towns and castles of Burgdorf and Thun to Bern for 37,800 guilders.[5]

As part of the peace treaty, Bern acknowledged the rights and privileges that the Kyburgs had granted to Burgdorf. Burgdorf enjoyed a unique amount of autonomy compared to the other cities in the Bernese city-state. The town had its own mayor, council and high and low courts. Starting in 1394 the town began to buy courts, land and forests from the impoverished nobility. It began to acquire the surrounding villages and towns as well. In 1394 Rütschelen came under Burgdorf's authority. This was followed in 1395 by Grasswil, 1400 by Wil (now part of Rütschelen), 1402 by Inkwil (until 1720), 1423 by Niederösch, 1429 by Bettenhausen, 1429 and 1509/10 Thörigen, 1431 by Gutenburg and Lotzwil, 1435 by Kleindietwil and at the start of the 16th century Oberösch. The city created the bailiwicks of Grasswil (Grasswil, Ösch, Heimiswil) and Lotzwil (Thörigen, Lotzwil) under the administration of an alderman.[6]

The city government consisted of a small council (12 members) and a large council (32 members) Starting in 1384 the Schultheiss was chosen by Bern. The small council was proposed by Burgdorf and approved by Bern, while the large council was appointed by the small council. By the 15th century, Burgdorf had about 900 residents which made it larger than most of the surrounding towns. The main industry remained agriculture until about 1798. Trade remained mostly regional and the products of the local industry (tannery, wool and linen weaving) only sold in the nearby region. Until the late 15th century, the town had a few guilds which remained without political or social power. They were mostly responsible for a few city obligations including supervising the fire and security watches. There were five guild houses in the upper city (blacksmiths-carpenters, butchers-shoemakers, bakers, weavers and tailors), one in the lower town (tanners). Each guild consisted of several trades, for example the blacksmiths-carpenters, allowed craftsmen working in 22 different jobs involving iron, stone and wood processing to join.[6]

The economic growth in the 15th century enabled the city to build municipal buildings and maintain the fortifications and public areas. The city hall, church and market were all built or expanded during this time. However, starting in the 1460s and 1470s the economy began to stagnate. The guilds gradually became more powerful and began to choke the economy. In the 16th century, the economies of the surrounding villages began to grew unfettered by guild rules. The guild controlled markets of Burgdorf attempted to compete with these small markets by banning the import of goods from the surrounding countryside. These bans (in 1619 and again in 1666-74) only served to undermined Burgdorf's position as a regional market and service center. Burgdorf remained hostile to new businesses and in some cases drove them to settle in neighboring towns.[6]

With the construction of the road on Kirchberg (1756–64) Burgdorf was no longer on any regional trade routes. The devastating fires (1706 upper town and in 1715 in the lower town) forced the city council to rebuilt much of the city. Overall, the population stagnated and after 1655 it became increasing hard to gain citizenship in Burgdorf. The percentage of non-citizen residents who could become citizens was less than 40% in 1764. As the number of artisans had declined, there were fewer and fewer families for that could serve on the town councils. At times, the large council only had 27 members instead of 32, due to a lack of candidates. During the Swiss peasant war of 1653 the city remained loyal to Bern. While they feared an attack by the peasant armies, Burgdorf was bypassed. The invasion of the French in 1798 and the forced reforms of the Helvetic Republic demolished much of the traditional, conservative power structure and privilege in Burgdorf.[6]

Of the built up area, industrial buildings made up 6.3% of the total area while housing and buildings made up 14.0% and transportation infrastructure made up 8.0%. while parks, green belts and sports fields made up 2.2%. 39.8% of the total land area is heavily forested. Of the agricultural land, 18.1% is used for growing crops and 6.1% is pastures. All the water in the municipality is in rivers and streams.[7]

The blazon of the municipal coat of arms is Per pale Sable and Argent all within a Border Or.[8]

The historical population is given in the following chart:[6] 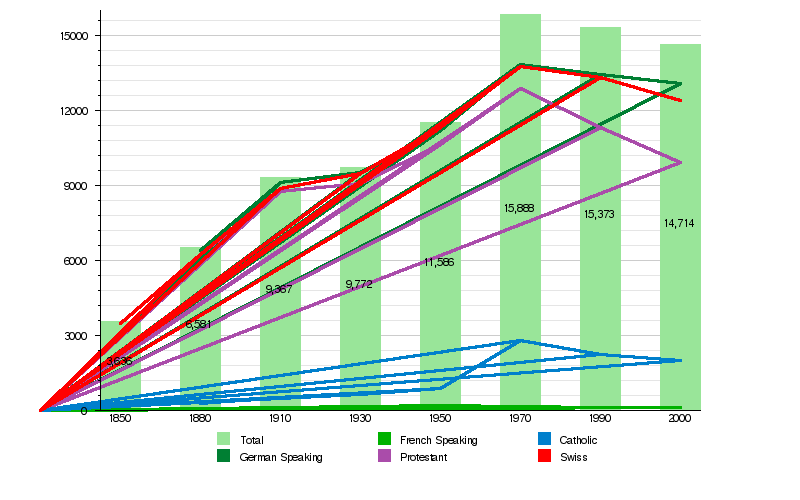 The entire old city, the former Grosse Apotheke and Diesbacher House, the former Mädchenschule (Girls' School), the former Niederspital (Hospital), the Gehöft Grafenscheuren, the Grosshaus (Large House) at Hohengasse 4 / Kronenplatz 4, the House zum Ochsen at Hohengasse 35, the Villa Schnell, the Kantonales Technikum (College), the Leinenweberei (Linen Spinning Plant) Schmid with Villa, the Museum Franz Gertsch, the Swiss Reformed City Church, the Sammlung Historisches Armeematerial Collection of Historical Military Equipment, which is shared between Thun, Burgdorf and Dübendorf in Zurich), Castle, the Quarantine House and Chapel and the Villa Roth are listed as Swiss heritage site of national significance The entire town of Burgdorf is part of the Inventory of Swiss Heritage Sites.[13]

Burgdorf is twinned with the towns of Burgdorf/Hannover, Germany and San Pellegrino Terme, Italy.[14]

Burgdorf has several engine works and some departments of the Bern University of Applied Sciences (e.g. Architecture and Civil Engineering). Burgdorf has a growing economy, several small companies called KMU (small and middle companies) are located and have their headquarters in Burgdorf, such as Ypsomed (former Disetronic), Aebi, Typon, Iverslee and Seewer.

Burgdorf is also known for its local beer. In 1871 Burgdorf had one of the most modern breweries is Switzerland.[18] However, these local, small breweries closed during the 20th Century. In 1999, a brewery was opened, which brewed a local Burgdorf beer. This beer has won a number of awards at Beerdays in Solothurn.[19]

The Canton of Bern school system provides one year of non-obligatory Kindergarten, followed by six years of Primary school. This is followed by three years of obligatory lower Secondary school where the students are separated according to ability and aptitude. Following the lower Secondary students may attend additional schooling or they may enter an apprenticeship.[21]

As of 2000[update], there were 1,152 students in Burgdorf who came from another municipality, while 239 residents attended schools outside the municipality.[17]

Burgdorf is home to 2 libraries. These libraries are the Stadtbibliothek Burgdorf and the BFH Technik und Informatik TI und Architektur, Holz und Bau AHB Burgdorf. There was a combined total (as of 2008[update]) of 69,376 books or other media in the libraries, and in the same year a total of 266,590 items were loaned out.[23]