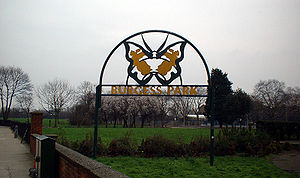 Burgess Park is a public park situated in the London Borough of Southwark, in an area between Camberwell to the west, Walworth to the north, Bermondsey to the east and Peckham to the south. At 56 hectares (140 acres), it is one of the largest parks in South London.[1] 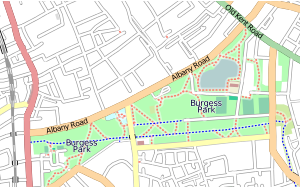 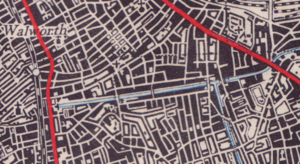 Unlike most other parks in London, Burgess Park was carved out of a highly built-up area of the city. Virtually all the land now occupied by the park was previously housing, industry and transport infrastructure. The idea for Burgess Park came out of the 1943 Abercrombie plan for open spaces in London, and the land has been gradually assembled and landscaped over the subsequent decades, first by the London County Council, then the Greater London Council, and since the mid-1980s, the London Borough of Southwark. An important stage in the construction of the park was the closure of the Grand Surrey Canal in the early 1970s, which terminated at Addington Wharf on Walworth Road. The Canal served the Surrey Commercial Docks, and the area near Camberwell was full of 19th century streets, houses and industrial buildings (including a ginger beer factory), many of which had suffered heavy bomb damage during WWII. The stretch of canal now incorporated in the Park is the site of Camberwell Wharf, which was virtually straight. Other land incorporated in the park was occupied by housing. While some of this housing was in poor condition, a lot of perfectly serviceable homes were demolished to build the park, and this has resulted in strong local feelings about the park. 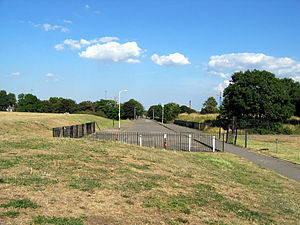 Named Burgess Park in 1973 (after Councillor Jessie Burgess, Camberwell's first woman Mayor), it is still not complete and contains some former roads which have been stopped up but not yet grassed over. The boundaries of Burgess Park remain a matter of dispute, and because the park has never been finished, it is regularly the subject of proposals to build housing, schools, or transport links of the sort that would never be contemplated in one of London's more traditional Victorian Parks.

The park received a grant of £2 million from Boris Johnson, Mayor of London, as part of a London-wide competition, with plans to subsequently top this up to £6 million by Southwark Council, to ensure the renovation of this neglected space. 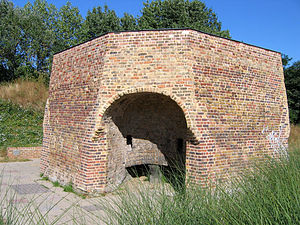 There are listed buildings in the Park, remnants of the streets which once occupied the site: a lime kiln, the library, baths and wash houses and the former almshouses in Chumleigh Gardens. There are also several bridges, which once used to cross the canal.

Chumleigh Gardens, near the centre of the park, is a World Garden, with plants and landscaping designed to reflect the diversity of the surrounding population of this highly cosmopolitan portion of London.

There is a thriving "Friends of Burgess Park". The park also plays host every August to the Carnaval Del Pueblo, Europe's largest celebration of Latin American culture.