listen)) is a historical territory and a former administrative region of east-central France. Since 1 January 2016, it is part of the new region Bourgogne-Franche-Comté.[2] Burgundy comprises the following four departments: Côte-d'Or, Saône-et-Loire, Yonne and Nièvre.

Historically, "Burgundy" has referred to numerous political entities, including kingdoms and duchies spanning territory from the Mediterranean to the Low Countries.

Burgundy takes its name from the Burgundians, a Germanic people. 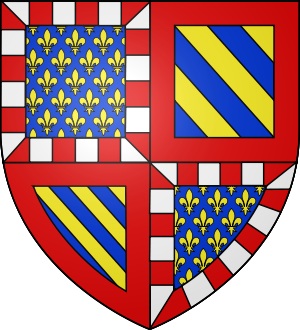 Coat of arms of the second Duchy of Burgundy and later of the province
Main article: History of Burgundy

Burgundy was inhabited in turn by Celts, Romans (Gallo-Romans), and in the 4th century, the Romans who were then allied with the Burgundians, a Germanic people possibly originating in Bornholm (Baltic Sea), who settled there and established their own kingdom. However, Agathias identifies Burgunds (Βουρουγουνδοι) and Ultizurs as Bulgaric people of Hunnic circle tribes, near relatives of Cotrigurs and Utigurs.[3][4] This Burgundian kingdom was conquered in the 6th century by another Germanic tribe, the Franks, who continued the kingdom of Burgundy under their own rule.

Burgundy's modern existence is rooted in the dissolution of the Frankish Empire. In the 880s, there were four Burgundies, which were the Kingdom of Upper and Lower Burgundy, the duchy and the county.

During the Middle Ages, Burgundy was the seat of some of the most important Western churches and monasteries, among them Cluny, Cîteaux, and Vézelay.

During the Hundred Years' War, King John II of France gave the duchy to his youngest son, Philip the Bold. The duchy soon became a major rival to the crown. The court in Dijon outshone the French court both economically and culturally. In 1477, at the battle of Nancy during the Burgundian Wars, the last duke Charles the Bold was killed in battle, and the Duchy itself was annexed by France and became a province. However the northern part of the empire was taken by the Austrian Habsburgs.

With the French Revolution in the end of the 18th century, the administrative units of the provinces disappeared, but were reconstituted as regions during the Fifth Republic in the 1970s. The modern-day administrative région comprises most of the former duchy. 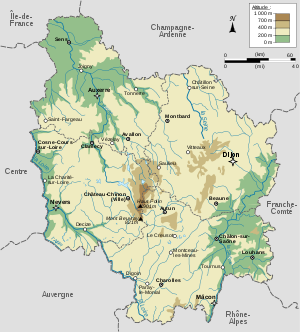 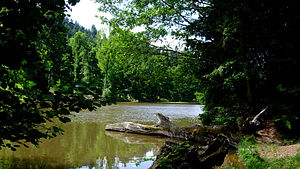 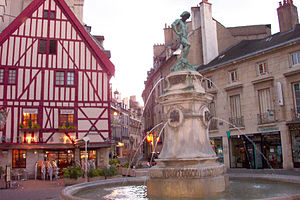 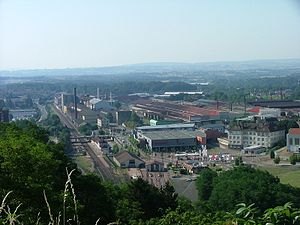 The climate of this region is essentially oceanic (Cfb in Köppen classification), with a continental influence (sometimes called a "half-continental climate"). 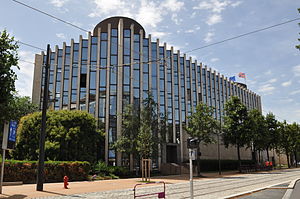 Seat of the regional council of Burgundy in Dijon

The regional council of Burgundy is the legislative assembly. Its seat is in the capital city Dijon, at 17 boulevard de la Trémouille.

Since 2004 the council is chaired by the Socialist François Patriat. 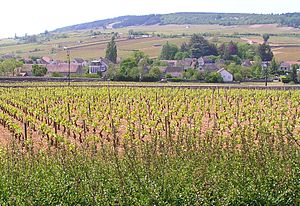 Chardonnay vineyards in the south of the Côte de Beaune surrounding the town of Meursault.
Main article: Burgundy wine

Burgundy is one of France's main wine producing areas. It is well known for both its red and white wines, mostly made from Pinot noir and Chardonnay grapes, respectively, although other grape varieties can be found, including Gamay, Aligote, Pinot blanc, and Sauvignon blanc. The region is divided into the Côte-d'Or, where the most expensive and prized Burgundies are found, and Beaujolais, Chablis, the Côte Chalonnaise and Mâcon.

The reputation and quality of the top wines, together with the fact that they are often produced in small quantities, has led to high demand and high prices, with some Burgundies ranking among the most expensive wines in the world.

Some tourist sites include the Rock of Solutré, the Tournus cathedral, Cluny, Brancion, the castles of Cormatin and Couches, the palace of the dukes of Burgundy in Dijon, the Pézanin Arboretum (in Dompierre-les-Ormes), and Vézelay Abbey.

Earlier, the southeastern part of Burgundy was heavily industrial, with coal mines near Montceau-les-Mines and iron foundries and crystal works in Le Creusot. These industries declined in the second half of the twentieth century, and Le Creusot has tried to reinvent itself as a tourist town.