Burke's Landed Gentry (originally titled Burke's Commoners) is the result of nearly two centuries' intense work by the Burke family and others since, in building a collection of authoritative books on genealogy and heraldry,[1] which has evolved alongside Burke's Peerage, Baronetage & Knightage.

Burke's Landed Gentry provides a detailed listing of families once holding or who continue to own large estates of land and, historically at least, were often in positions of influence and power in regional administration such as High Sheriff, JP, DL or MP for their county. 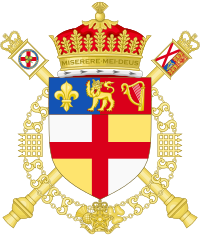 Burke's Landed Gentry's original purpose, the genealogical record of landed gentry families, became obsolete in the 21st century, whereas the continued hereditary element in the British House of Lords maintains political as well as social interest in reliable public records of the succession to peerage titles, not least because the holders and their heirs retain privileged access to becoming parliamentary legislators. Since the Stuart period, important British families ineligible for peerage publications, such as baronets, were included in later aristocracy books such as "Burke's" and "Debrett's" by virtue of their hereditary title.

The gentry of England and Wales played a pivotal role in regional administration for several centuries while a largely un-centralised system of national government prevailed. From mediaeval times, Knights of the Shire (later Members of Parliament) generally came from landed families in each county, and fulfilled these roles on an almost rotational basis from session to session – not as a parliamentary career – but as an occasional duty expected of their status. Such families generally inter-married strictly within their own counties,[2] thus creating an administrative class in each county closely bonded by familial ties. In English and Welsh feudal society a man's social status was dependent on both the extent of his landholding and by the status of his overlord: those holding land directly from the king were the tenants-in-chief, a group of exalted status. Tenants-in-chief proved to be the monarch's most reliable administrators in the shires because they owed the king personal allegiance and military service as his feudal tenants. Originally they were selected by King William the Conqueror (1066–1087) for their military prowess and reliability as commanders, fellow-conquerors and administrators of his new kingdom of England, and were awarded estates for their further support. However over time, and despite careful "good-breeding", the martial qualities of their progeny may have degenerated by natural process from those of the founders of their House, yet they still inherited the high social status and military obligations of tenants-in-chief. They thus derived their status no longer from personal qualities, but purely from the land they held, and thus the ownership and succession to their estate was of particular importance.[3]

In the 21st century public interest in land-owning ancient families has declined and knowledge concerning the progeny of those successful self-made businessmen who have taken over (by purchase) country estates is likely to be both unforthcoming and of no special public interest. The country-life of the self-made businessman is often lived in jealously guarded privacy beyond security gates, unlike the life of the former country squire largely on public display: with his manor house next to the publicly accessible church, which he attended every Sunday with his family in the manorial pew. With the demise of dynastic ambition as a worthy motive,[4] ownership of large estates is generally a temporary situation, with owners becoming bored and moving on elsewhere. Moreover, owners of such estates, and the wealthy in general, nowadays are no longer expected or indeed desired by the public to participate in politics or in county public service, a role since largely taken over by members of the local bourgeoisie, often of lower social status (i.e. local shopkeepers, small business owners, etc.). UK inheritance taxation introduced in the early 20th century has contributed significantly, by socialist-leaning political design, to many large landed estates not being capable of passing through more than one or two subsequent generations, thus the days of the landed gentry have become ever increasingly numbered.

More ancient manor houses are becoming either the property of the National Trust, handed over in lieu of inheritance tax by families whose finances have become exhausted, or country house hotels, alternatively corporate retreats or training centres. A few ancient gentry families still survive on reduced means at their ancestral estate, for example the Fulfords of Great Fulford, near Dunsford in Devon (featured on the 2012 TV series by "Country House Rescue") and described in Burke's Landed Gentry as having been resident since the reign of King Richard I (1189–1199);[5] but the Fulfords no longer retain much administrative influence locally.

The Return of Owners of Land, 1873 is significant for being only the second serious attempt since the Domesday Book at listing the largest landowners by county of England. Burke's Landed Gentry records many landed families who were neither peers nor baronets, and whose pedigrees were thus omitted from Burke's Peerage and Debrett's Peerage, but which exercised considerable influence, power and patronage in the counties.

Burke's Landed Gentry, first published in 1826 and developed by John Burke (1786–1848), remains widely used by historians and genealogical researchers, e.g. Ancestry.com.[6] Its contents frequently overlap with peerage genealogies, since exceptionally talented younger sons of gentry families frequently rose to national prominence whether as parliamentarians, civil servants or those receiving royal recognition. The Rashleighs coincidentally provide an example of a cadet gentry family, who were created baronets in 1831 and who, in the 20th century, inherited their ancestral Menabilly estate.[7]

Historical information narrated by word of mouth over centuries often includes a blend of fact and mythology, whether wittingly or unwittingly:[1] Oscar Wilde famously quipped Burke's Peerage and Baronetage as being "the best thing in [English] fiction"; nevertheless, Burke's publications are regarded as a valuable research tool of historic and notable families.

Part of "Burke's" early success lay in the literary writing-style adopted by John Burke, the publication's founder, who made the material, based on work by many earlier authorities, more readable than ever before, a style maintained by his successors.[8] His son, Sir Bernard Burke (1814–1892), pioneer of the "Burke's Landed Gentry" and also a prolific writer, was a respected genealogist and became a King-of-Arms in the College of Arms, whose flair for flowery phraseology appealed to the period of Victorian "Gothick phantasy". A prodigiously hard worker, his volume of output allowed little time for meticulous checking in keeping with modern genealogy methods, a typical account of the antiquity of any family being that an ancestor "came in with the Conqueror".[1]

Throughout English history the landed gentry played an important role, particularly during the English Civil War in the 17th century. These landowners had estates of varying sizes and were mostly untitled, save from the knighthoods or baronetcies. Baronets are those not belonging to the peerage, but holding the hereditary title of Sir, are usually considered among equals of the lesser aristocracy in Europe.

After World War II, the landed gentry's significance declined further, but it was not until the 1980s under British Prime Minister Margaret Thatcher, ironically a Tory, that their influence finally waned. This prompted former PM Harold Macmillan's famous reference to "more Estonians than Etonians in the Cabinet".[9]

The term "landed gentry" is still occasionally used by some media commentators, but "Burke's"[1] maintain that its use of the term is elastic and stems, in large part, from the adoption of the short title from their first series entitled "Burke's Commoners" (as opposed to Burke's Peerage and Baronetage).