Burlington is a city in Alamance County in the U.S. state of North Carolina. It is the principal city of the Burlington, North Carolina Metropolitan Statistical Area which encompasses all of Alamance County, in which most of the city is located, and is a part of the Greensboro-Winston-Salem-High Point CSA. The population was 49,963 at the 2010 census,[3] which makes Burlington the 17th largest city in North Carolina. The Metropolitan Statistical Area population was over 150,000 in 2010.

Alamance County was created when Orange County was partitioned in 1849. Early settlers included several groups of Quakers, many of which remain active in the Snow Camp area, German farmers, and Scots-Irish immigrants.

The need of the North Carolina Railroad in the 1850s to locate land where they could build, repair and do maintenance on its track was the genesis of Burlington, North Carolina. The company selected a piece of land slightly west of present day Graham. On January 29, 1856, the last spikes were driven into the final tie of the North Carolina Railroad project, uniting the cities of Goldsboro and Charlotte by rail. The next day, the first locomotive passed along the new route. When the iron horse arrived in Alamance County, locals referred to it as "the eighth wonder of the world". 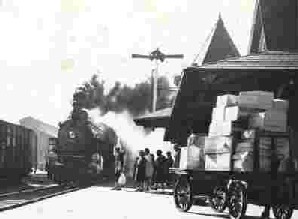 Not long after this historic opening, the railroad realized a pressing need for repair shops. With Alamance County's position along the new line, it became the logical choice for the shops' location. After several debates concerning where the shops would be located, Gen. Benjamin Trollinger, a progressive Alamance County manufacturer, made an offer that settled the matter. Gen. Trollinger owned land just northwest of Graham, and he convinced several other prominent citizens owning adjacent lots to join him and sell their property to the railroad. By 1859, construction of the shops began. Seemingly overnight, a town was born. A church, bank, hotel and restaurant sprang up. "Company Shops", as the town became known, was also chosen as the railroad's headquarters. By the time the shops were completed, the village had grown to twenty-seven buildings. Thirty-nine white men, twenty Negro slaves and two free Negroes were employed in or around the shops. Sale of town lots soon started, but not surprisingly, the sale of lots was slow until after the Civil War. By 1864, Company Shops numbered about 300 persons.

After twenty-five years of operations, the shops closed along with most of the area's railroad facilities. In 1886, the North Carolina Railroad Company transferred its operations to Spencer, North Carolina. The railroad offices and shops at Company Shops were closed. With the railroad shops no longer operated there, the citizens of Company Shops decided a new name was needed. Company Shops was reborn as Burlington on February 14, 1893. The city of Burlington was incorporated, and a charter was issued by the State Legislature.

Around the turn of the century, the industrial era began, and Alamance County made a rich contribution to the industrial advancement of the country. Gen. Trollinger and E.M. Holt established small textile operations along the Haw River and Great Alamance Creek. In 1908, E.M. Holt built the first cotton mill in the South. From the establishment of this single factory, Alamance County grew to eventually operate 30 cotton mills and 10 to 15 yarn manufacturing plants employing 15,000 people. Eventually, the early textile venture of E.M. Holt became known all over the world as Burlington Industries, and is now headquartered in nearby Greensboro. Throughout this period, Burlington became a prosperous and vibrant little city filled with schools, churches, newspapers, telegraph and telephone lines, roads and a streetcar line—all in keeping with the latest "modern progress" of the times.

Though textiles continued to dominate the local economy well into the 1970s, the people of Burlington knew they could not survive with only one industry. The country's involvement in World War II brought important local economic changes. In 1942, the federal government purchased and leased a 22-acre (8.9 ha) site to Fairchild Aircraft Corporation for the construction of test aircraft. After two years of production, the site was leased to Firestone Tire Company for the Army's tank rebuilding program. At the close of the war, the federal government chose not to leave, but continued to utilize the property for government contract business. This decision would bring Western Electric to town along with new employees from around the country. Their contracts ensured Burlington's participation during the Cold War manufacturing and testing of emerging defense technologies. Four decades later (1991), however, the doors to Western Electric (then Lucent Technologies) were locked, and another chapter of Burlington’s history was over.

During this century-and-a-half of economic change, Burlington grew, adapted and prospered. Originally the center of commerce for Company Shops, the downtown area still serves as the heart of today's community with financial services, government services, an expanded library, small shops, eateries and a restored theater. Downtown has also returned to its status as a major employment center, becoming the home to Laboratory Corporation of America, one of the world's largest biomedical testing firms and Burlington/Alamance County's largest employer.

The climate in this area is characterized by relatively high temperatures and evenly distributed precipitation throughout the year. According to the Köppen Climate Classification system, Burlington has a Humid subtropical climate, abbreviated "Cfa" on climate maps.[6] 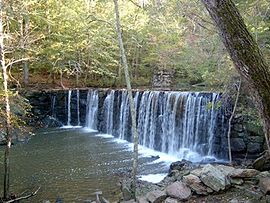 There are a variety of parks that can be found in Burlington, including Joe Davidson Park, Cedarock Park, and the Burlington City Park. Upon visiting these parks one can find a variety of things for various activities, such as baseball fields, basketball courts, soccer fields, playgrounds, disc golf and tennis courts.

The Alamance County Recreation and Parks Department manages parks and community centers at the following locations:

There were 20,632 households out of which 28.1% had children under the age of 18 living with them, 38.9% were married couples living together, 17.5% had a female householder with no husband present, and 38.5% were non-families. 33% of all households were made up of individuals and 13.1% had someone living alone who was 65 years of age or older. The average household size was 2.38 and the average family size was 3.01.

Local public schools in Burlington include:

Burlington has no public busing system. However, transportation services are available to its residents through the Alamance County Transportation Authority. Locals can also ride the BioBus from nearby Elon University.

The Burlington Royals, a rookie-level farm team of Major League Baseball's Kansas City Royals, have played in Burlington since 2007. The team is based at Burlington Athletic Stadium. Prior to 2007 team was known as the Burlington Indians, functioning as a farm team of the Cleveland Indians since 1985.

The city's only indoor mall, Holly Hill Mall is located at the intersection of Huffman Mill Road and Church Street (US 70). An outdoor mall, Alamance Crossing, opened in 2007 at Interstate 40/85 and University Drive. Just off I-85/40 at Exit 145 is North Carolina's original outlet mall, Burlington Outlet Village(formerly BMOC).[10]

Burlington is known to have the most restaurants per capita in the state of North Carolina. In 2011 Burlington was ranked 29th overall in cities with the best Restaurant Growth Index (RGI) with an RGI score of 167. Burlington has 322 restaurants located throughout the city; popular ones including Zack's Hotdogs, La Fiesta, Blue Ribbon Dinner, Skids and Mykonos Grill.[citation needed]