The Burmese python (Python bivittatus) is one of the five largest species of snakes in the world (about the third-largest as measured either by length or weight). It is native to a large variation of tropic and subtropic areas of South and Southeast Asia. Until 2009, it was considered a subspecies of Python molurus, but now is recognized as belonging to a distinct species.[3]

(video) An albino Burmese python at a zoo in Japan

Burmese pythons are dark-colored snakes with many brown blotches bordered in black down the back. The perceived attractiveness of their skin pattern contributes to their popularity with both reptile keepers and the leather industry. The pattern is similar in colour, but different in actual pattern from the African rock python (Python sebae), sometimes resulting in confusion of the two species outside of their natural habitats. The African rock python can generally be distinguished by its tighter pattern of markings, compared to the Burmese python, which has bolder patterns, similar to those seen on a giraffe.[7] 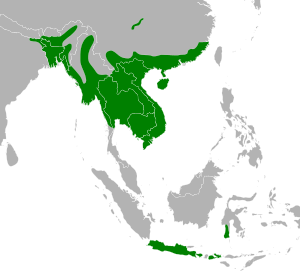 Burmese pythons are found throughout Southern and Southeast Asia, including eastern India, Nepal, western Bhutan, southeastern Bangladesh, Myanmar, Thailand, Laos, Cambodia, Vietnam, northern continental Malaysia, far southern China (Fujian, Jiangxi, Guangdong, Hainan, Guangxi, and Yunnan),[17] Hong Kong, and in Indonesia on Java, southern Sulawesi, Bali, and Sumbawa.[18] Burmese pythons are also reported from Kinmen, very close to the Chinese mainland, but in Taiwanese territory;[19] the Burmese python belongs to the fauna of Taiwan when Taiwan refers to the Republic of China, but not to the island of Taiwan.

These pythons are excellent swimmers and need a permanent source of water. They can be found in grasslands, marshes, swamps, rocky foothills, woodlands, river valleys, and jungles with open clearings. They are good climbers and have prehensile tails. 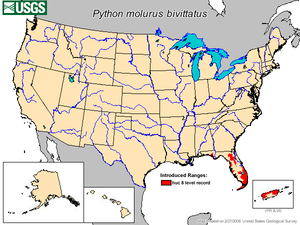 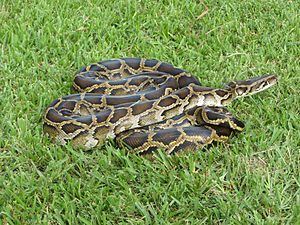 A captured Burmese Python in the Florida Everglades

Python invasion has been particularly extensive in South Florida, where a large number of pythons have made their way to the Everglades.[20] It has been suggested that the current number of Burmese pythons in the Florida everglades has reached a minimum viable population and become an invasive species. More than 1,330 [21] have been captured in the Everglades. The importation of Burmese pythons was banned in the United States in January 2012 by the U.S. Department of the Interior.[22]

Bird and coyote populations may be threatened, as well as already-rare rival predatory species, such as Florida panthers.[23]

Florida's Hurricane Andrew was deemed responsible for the destruction of a python breeding facility, as well as with possible zoo, warehouse,[24] and household escapees.

By 2007, the Burmese python was already established in northern Florida, in the coastal areas of the Florida Panhandle. In February 2008, USGS scientists published a projected range map for the US, based on average climate data of the snake's home range and global warming projections, which predicted that by the end of the 21st century, these snakes could migrate to and flourish in as much as a third of the continental United States, including all three coasts.[25] However, a subsequent study produced a map incorporating both climatic extremes and averages which projected that the Burmese python's range as limited to southern Florida.[26] Also, this projection was criticized in an unsigned Axcess News article as not having been peer-reviewed.[27] Burmese pythons kept throughout winter in an experimental enclosure in South Carolina all died during the study, apparently because they could not properly acclimate to the cold, but most survived extended periods at temperatures below those typical of southern Florida.[28]

Recently published data [29] contradicts the initial USGS study [30] which claimed that non-native Burmese pythons could expand as far north as the southern third of the United States. The Burmese python will remain in the Everglades.[31] Furthermore, other reputable herpetologists have commented on the controversial theory positing future migration past the Florida Everglades.

The National Geographic Society's resident herpetologist, Dr. Brady Barr, said, "Climate data reveal that temperatures found in southern Florida simply are not conducive to the long-term survival of large tropical snakes. When it gets cold, these snakes die." Dr. Barr also said "Feral hogs are a bigger problem for the Everglades than pythons. The press has sensationalized this story to the point that people think the sky is falling. Hopefully comprehensive research such as Jacobson et al. will put an end to the hysteria."[32]

Burmese pythons are mainly nocturnal rainforest dwellers.[33] When young, they are equally at home on the ground and in trees, but as they gain girth, they tend to restrict most of their movements to the ground. They are also excellent swimmers, being able to stay submerged for up to half an hour. Burmese pythons spend the majority of their time hidden in the underbrush. In the northern parts of its range, the Indian python may brumate for some months during the cold season in a hollow tree, a hole in the riverbank, or under rocks. Brumation[34] is biologically distinct from hibernation. While the behaviour has similar benefits, specifically to endure the winter without moving, it also involves preparation of both male and female reproductive organs for the upcoming breeding season. Controversy exists over whether the Burmese species is able to brumate.

Burmese pythons breed in the early spring, with females laying clutches of 12–36 eggs in March or April. They remain with the eggs until they hatch, wrapping around them and twitching their muscles in such a way as to raise the ambient temperature around the eggs by several degrees. Once the hatchlings use their egg tooth to cut their way out of their eggs, no further maternal care is given. The newly hatched often remain inside their eggs until they are ready to complete their first shedding of skin, after which they hunt for their first meal.[35]

Like all snakes, the Burmese python is carnivorous. Its diet consists primarily of appropriately sized birds and mammals. The snake uses its sharp rearward-pointing teeth to seize its prey, then wraps its body around the prey, at the same time contracting its muscles, killing the prey by constriction. It is often found near human habitation due to the presence of rats, mice, and other vermin as a food source. However, its equal affinity for domesticated birds and mammals means it is often treated as a pest. In captivity, its diet consists primarily of commercially available, appropriately sized rats, graduating to larger prey such as rabbits and poultry as it grows. Exceptionally large pythons may even require larger food items such as pigs or goats, and are known to have attacked and eaten alligators and adult deer in Florida, where they are an invasive species.[36][37]

The digestive response of Burmese pythons to such large prey has made them a model species for digestive physiology. A fasting python has a reduced stomach volume and acidity, reduced intestinal mass, and a 'normal' heart volume. After ingesting prey, the entire digestive system undergoes a massive remodelling, with rapid hypertrophy of the intestines, production of stomach acid, and a 40% increase in mass of the ventricle of the heart to fuel the digestive process.[38] 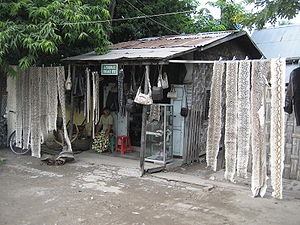 Leather goods and skins of Burmese python and reticulated python (Python reticulatus reticulatus) at a local shop at Mandalay, Burma

Wild populations are considered to be "threatened" and are listed on Appendix II of CITES. All the giant pythons (including the Indian python, the African rock python, and the reticulated python) have historically been slaughtered to supply the world leather market, as well as for folk medicines, and captured for the pet trade. Some are also killed for food, particularly in China.

The IUCN has recently listed the Burmese python as "Vulnerable", reflecting its overall population decline. Important reasons for the decline are trade for skins and for food; habitat degradation may be a problem in some upland areas.[1]

In Hong Kong, it is a protected species under Wild Animals Protection Ordinance Cap 170.

Burmese pythons are often sold as pets, and are made popular by their attractive colour and apparently easy-going nature. However, these animals have a rapid growth rate, and often exceed 2.1 m (6.9 ft) in length in a year if cared for and fed properly. By age four, they will have reached their adult size, though they continue growing very slowly throughout their lives, which may exceed 20 years.

Although this species has a reputation for docility, they are very powerful animals, capable of inflicting severe bites or even killing a keeper by constriction.[39] They also consume large amounts of food, and due to their size, require large, often custom-built, secure enclosures, which can be very expensive. As a result, some are released to the wild by irresponsible pet owners. For this reason, some jurisdictions (including Florida)[40] have placed restrictions on the keeping of Burmese pythons as pets. Violators would be imprisoned for more than 7 years or fined $500,000 if convicted.

A secondary problem with feeding Burmese pythons is that many owners believe if a snake acts hungry, that it should be fed. As Burmese pythons are opportunistic feeders, they will eat almost any time food is offered, and often act hungry even when they have recently eaten. This often leads to overfeeding, and obesity-related problems are common in captive Burmese pythons.

Like the much smaller ball python, Burmese pythons are known to be easygoing or timid creatures, which means that if cared for properly, they can easily adjust to living near humans. 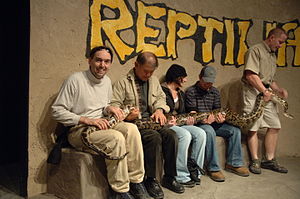 Although pythons are typically afraid of people due to their high stature, and will generally avoid humans, special care is still required when handling them. Some jurisdictions require owners to hold special licenses, and, as with any wild animal being kept in captivity it is important to treat them with the respect an animal of this size commands. 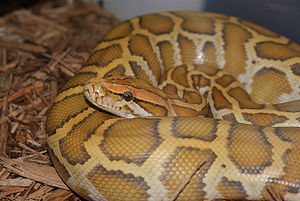 The Burmese python is frequently captive-bred for colour, pattern, and more recently size. Its albino form is especially popular and is the most widely available morph. They are white with patterns in butterscotch yellow and burnt orange. There are also "labyrinth" specimens, which have mazelike patterns; khaki-coloured "green"; and "granite", which have many small angular spots. Breeders have recently begun working with an island lineage of Burmese pythons. Early reports indicate that these "dwarf" Burmese have slightly different colouring and pattern from their mainland relatives and do not grow much over 2.1 metres (7 ft) in length. One of the most sought-after of these variations is the leucistic Burmese. This particular variety is very rare, being entirely bright white with no pattern and blue eyes, and has only recently (2008/2009) been reproduced in captivity as the homozygous form (referred to as "super" by reptile keepers) of the codominant hypomelanistic trait. The caramel Burmese python has caramel-coloured pattern with "milk-chocolate" eyes.