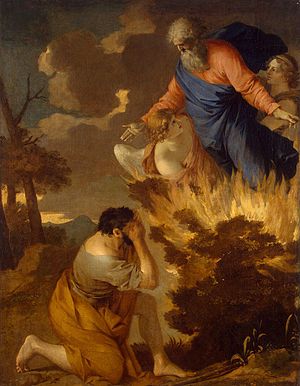 The Hebrew word used in the narrative, that is translated into English as bush, is seneh (סנה), which refers in particular to brambles;[2][3][4] seneh is a biblical dis legomenon, only appearing in two places, both of which describe the burning bush.[3] It is possible that the reference to a burning bush is based on a mistaken interpretation of Sinai (סיני), a mountain described by the Bible as being on fire.[3][5] Another possibility is that the use of seneh (סנה) may be a deliberate pun on Sinai (סיני), a feature common in Yahwistic texts.[6] 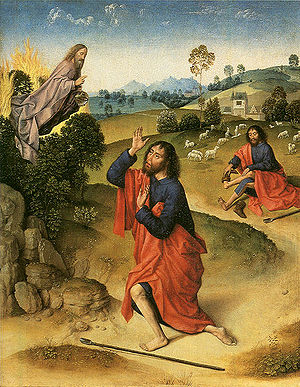 Moses and the Burning Bush, attributed to Dieric Bouts.

In the narrative, an angel of the Lord is described as appearing in the bush,[7] and God is subsequently described as calling out from it to Moses, who had been grazing Jethro's flocks there.[1] When Moses starts to approach, God tells Moses to take off his sandals first, due to the place being holy ground,[8] and Moses hides his face.[9] Some Old Testament scholars regard the account of the burning bush as being spliced together from the Jahwist and Elohist texts, with the Angel of Yahweh and the removal of sandals being part of the Yahwist version, and the Elohist's parallels to these being God and the turning away of Moses' face, respectively.[10][11][6]

When challenged on his identity, Yahweh replies that he is the God of the Patriarchs – Abraham, Isaac, and Jacob –[12] and that he is Yahweh.[13] The text derives Yahweh (יהוה) from the Hebrew word hayah (היה) in the phrase ehyeh ašer ehyeh , meaning he who is he, or I am that I am;[11] the Kabbalah takes this to mean that Yahweh himself is equal to his name.

The text portrays Yahweh as telling Moses that he is sending him to the Pharaoh in order to bring the Israelites out of Egypt, an action that Yahweh is described as having decided upon as a result of noticing that the Israelites were being oppressed by the Egyptians.[14] Yahweh tells Moses to tell the elders of the Israelites that Yahweh would lead them into the land of the Canaanites, Hittites, Amorites, Hivites, and Jebusites,[15] a region generally referred to as a whole by the term Canaan; this is described as being a land of milk and honey.[15]

According to the narrative: Yahweh instructs Moses to confront the Egyptians and Israelites and briefs the prophet on what is to take place. Yahweh then performs various demonstrative miracles in order to bolster Moses' credibility. Among other things, his staff was transmuted into a snake,[16] Moses' hand was temporarily made leprous,[17] and water was transmuted into blood,[18] In the text, Yahweh instructs Moses to take this staff in his hands, in order to perform miracles with it,[18] as if it is a staff given to him, rather than his own;[11] some textual scholars propose that this latter instruction is the Elohist's version of the more detailed earlier description, where Moses uses his own staff, which they attribute to the Yahwist.[10][11]

Despite the signs, Moses is described as being very reluctant to take on the role, arguing that he lacked eloquence, and that someone else should be sent instead;[19] in the text, Yahweh reacts by angrily rebuking Moses for presuming to lecture the One who made the mouth on who was qualified to speak and not to speak. Yet Yahweh concedes and allows Aaron to be sent to assist Moses, since Aaron is eloquent and was already on his way to meet Moses.[20] This is the first time in the Torah that Aaron is mentioned, and here he is described as being Moses' mouth piece.[21] 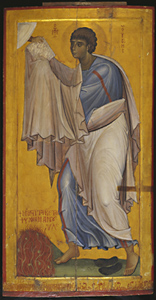 Icon of Moses receiving the Ten Commandments. The bush is depicted at his feet, lower left (Saint Catherine's Monastery, c. 1050).

Benny Shanon, professor of cognitive psychology at the Hebrew University of Jerusalem wrote a paper, "Biblical Entheogens: a Speculative Hypothesis", in the philosophy journal Time and Mind, which suggests Moses may have been under the influence of a hallucinogenic substance when he witnessed the burning bush.[22][23] In the abstract, Shanon states that entheogens found in arid regions of the Sinai peninsula and in the south of Israel (i.e. Negev) were commonly used for religious purposes by the Israelites though he says "I have no direct proof of this interpretation," and "such proof cannot be expected."[22][23] The plants he suggests may have caused the vision are Peganum harmala,[22] used by the Bedouin people in present times but not identified with any plant mentioned in the Bible,[23] and acacia, mentioned frequently in the Bible, and also used in traditional Bedouin and Arab medicine.[22][23]

Alexander and Zhenia Fleisher relate the Biblical story of the burning bush to the plant Dictamnus.[24] They write:

Intermittently, under yet unclear conditions, the plant excretes such a vast amount of volatiles that lighting a match near the flowers and seedpods causes the plant to be enveloped by flame. This flame quickly extinguishes without injury to the plant.

Colin Humphreys replies that "the book of Exodus suggests a long-lasting fire that Moses went to investigate, not a fire that flares up and then rapidly goes out."[25]

A 2012 paper in the Journal of Neuropsychiatry and Clinical Neurosciences suggested that psychiatric conditions associated with psychotic spectrum symptoms may be possible explanations for revelatory driven experiences and activities such as those of Abraham, Moses, Jesus and Paul the Apostle.[26] 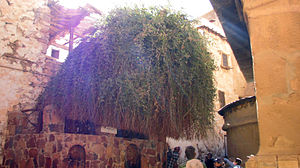 The bush at Saint Catherine's Monastery in the Sinai Peninsula, which monastic tradition identifies as being the burning bush.

Christian hermits originally gathered at Mount Serbal, believing it to be the biblical Mount Sinai. However, in the 4th century, under the Byzantine Empire, the monastery built there was abandoned in favour of the newer belief that Mount Saint Catherine was the Biblical Mount Sinai; a new monastery - Saint Catherine's Monastery was built at its foot, and the alleged site of the biblical burning bush was identified. The bush growing at the spot (a bramble, scientific name Rubus sanctus[27]), was later transplanted several yards away to a courtyard of the monastery, and its original spot was covered by a chapel dedicated to the Annunciation, with a silver star marking where the roots of the bush had come out of the ground. The Monks at Saint Catherine's Monastery, following church tradition, believe that this bush is, in fact, the original bush seen by Moses, rather than a later replacement[citation needed], and anyone entering the chapel is required to remove their shoes, just as Moses was said to have done so in the biblical account.

However, in modern times, it is not Mount Saint Catherine, but the adjacent Jebel Musa (Mount Moses), which is currently identified as Mount Sinai by popular tradition and guide books; this identification arose from Bedouin tradition.

Mount Serbal, Mount Sinai, and Mount Saint Catherine, all lie at the southern tip of the Sinai peninsula, but the peninsula's name is a comparatively modern invention, and it was not known by that name at the time of Josephus or earlier. Most modern scholars, as well as many modern theologians, dismiss the idea that the biblical Sinai was at the south of the peninsula, instead favouring locations in the Hijaz (at the north west of Saudi Arabia), northern Arabah (in the vicinity of Petra, or the surrounding area), or occasionally in the central or northern Sinai Peninsula. Hence, the majority of academics and theologians agree that if the burning bush ever existed, then it is highly unlikely to be the bush preserved at St Catherine's Monastery. 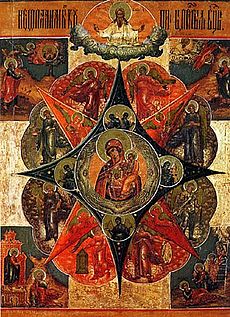 Traditional icon of Our Lady of the Burning Bush (Neopalimaya Kupina). 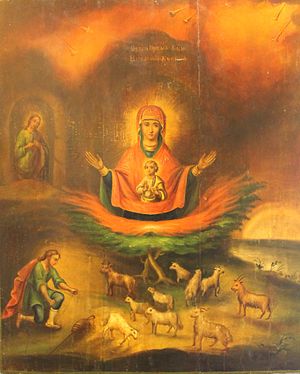 In Eastern Orthodoxy a tradition exists, originating in the Orthodox Fathers of the Church and its Ecumenical Synods (or Councils), that the flame Moses saw was in fact God's Uncreated Energies/Glory, manifested as light, thus explaining why the bush was not consumed. Hence, it is not interpreted as a miracle in the sense of an event, which only temporarily exists, but is instead viewed as Moses being permitted to see these Uncreated Energies/Glory, which are considered to be eternal things; the Orthodox definition of salvation is this vision of the Uncreated Energies/Glory, and it is a recurring theme in the works of Greek Orthodox theologians such as John S. Romanides.

In Eastern Orthodox parlance, the preferred name for the event is The Unburnt Bush, and the theology and hymnography of the church view it as prefiguring the virgin birth of Jesus; Eastern Orthodox theology refers to Mary, the mother of Jesus as the Theotokos ("God bearer"), viewing her as having given birth to Incarnate God without suffering any harm, or loss of virginity, in parallel to the bush being burnt without being consumed.[29] There is an Icon by the name of the Unburnt Bush, which portrays Mary in the guise of God bearer; the icon's feast day is held on the 4th of September (Russian: Неопалимая Купина, Neopalimaya Kupina).

While God speaks to Moses, in the narrative, Eastern Orthodoxy believes that the angel was also heard by Moses; Eastern orthodoxy interprets the angel as being the Logos of God, regarding it as the Angel of Great Counsel mentioned by the Septuagint version of Isaiah[30] (it is Counsellor, Almighty God in the masoretic text). 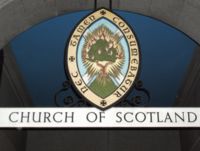 The emblem of the Church of Scotland, above the entrance to the Church Offices in Edinburgh

Crest of the Presbyterian Church of Australia

Crest of the Presbyterian Church of Victoria

The burning bush has been a popular symbol among Reformed churches since it was first adopted by the Huguenots (French Calvinists) in 1583 during its 12th National Synod. The French motto Flagror non consumor - I am burned but not consumed - suggests the symbol was understood of the suffering church that nevertheless lives. However, given the fire is a sign of God's presence, he who is a consuming fire (Hebrews 12:29) the miracle appears to point to a greater miracle: God in grace is with his covenant people and so they are not consumed.

The logo of the Jewish Theological Seminary of America is also an image of the Burning Bush with the phrase "and the bush was not consumed" in both English and in Hebrew.[31]