From Infogalactic: the planetary knowledge core
(Redirected from Burnley (borough))
Jump to: navigation, search
For the market town, see Burnley.

The Borough of Burnley (/ˈbɜːrnli/) is a local government district of Lancashire, England, with the status of a non-metropolitan district and borough. It has an area of 42.7 square miles (110.7 km2) and a population of 87,291 (mid-2014 est.), and is named after its largest town, Burnley. The borough is bounded by Hyndburn, Ribble Valley, Pendle, Rossendale – all in Lancashire – and the borough of Calderdale in West Yorkshire. It is governed by Burnley Borough Council, which has been controlled by the Liberal Democrats since 2008.

The current borders date from 1 April 1974, when the former county borough of Burnley merged with the urban district of Padiham and part of Burnley Rural District. In 2007 its proposal to merge with neighbouring Pendle Borough Council to form a larger unitary authority was rejected by the government.[2]

Burnley Borough Council has had a predominantly Labour controlled history, the party returned to power in 2012, after a period of leadership by the Liberal Democrats. The borough comprises 15 wards electing a total of 45 councillors.

Padiham Town Council was established in 2002.

Since 2002, a number of BNP councillors have been elected in the borough, with the last councilor losing her seat in the Hapton with Park ward in 2012.

Places in the borough of Burnley include: 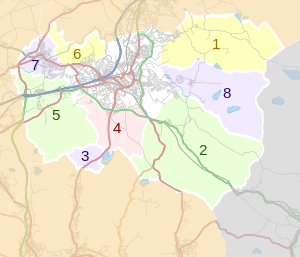 A 2010 report commissioned by the BBC and compiled by Experian ranked the borough as having the second lowest property prices in England, this combined with GCSE results and crime rates, led to the borough being ranked the as the worst place in England.[6]

See also: List of Schools in Burnley and Burnley § Education

Education Services in the borough are provided and controlled by Lancashire County Council.

The Hospital Trust operates Burnley General Hospital, while the PCT operates the network of GP surgeries, and recently opened 2 Primary Health Care Centres in the borough (St. Peters Centre in 2006 and Briercliffe in 2007).[7]

Policing Services in the borough are provided by the Pennine division of Lancashire Constabulary based at Burnley Police station, and controlled by Lancashire County Council. Plans are in place to merge the pennine division into the neighbouring eastern division, based in Blackburn.[8] Policing Services of the borough's Railways are provided by North West division of the British Transport Police - the nearest Transport Police office being in Preston.[9]

Refuse and recycling collection, and street cleansing is the responsibly of the borough council and these services are currently contracted to Veolia Environmental Services at a cost of approximately £3m / year.[10] The borough Council has signed up to Lancashire's Municipal Waste Management Strategy, which specifies that the borough must recycle or compost 56% of all waste by 2015 and 61% by 2020.

There are currently 2 household waste recycling centres run by Lancashire County Council in the borough. One located on Grosvenor Street in Burnley and the second on Park Road in Padiham. Lancashire County Councils long term plans to replace the Burnley site with facility at Heasandford Industrial Estate on the north eastern edge of the town, where approved in 2010 despite local objections regarding the site’s suitability. 3 months later they then announced the closure of the Padiham site as part of cost-cutting measures, increasing the unsuitability of the new Burnley site’s location.[11]