The Bush family is an American political family that is affiliated with the Republican Party and is prominent in both politics and business. Along with many members who have been successful bankers and businessmen, across generations the family includes one U.S. Senator, two Governors and two Presidents (one of the two presidents also served as Vice President). George Herbert Walker Bush and Barbara Pierce Bush were married for 73 years until their deaths in 2018, holding the record for the longest-married presidential couple. Peter Schweizer, author of a biography of the family, has described the Bushes as "the most successful political dynasty in American history".[1] According to some online sources,[2] the Bush family is of primarily English and German descent. Most members of the Bush family have been described as Rockefeller Republicans, or RINOs, as a result of their more moderate views when compared to conservative Republicans. 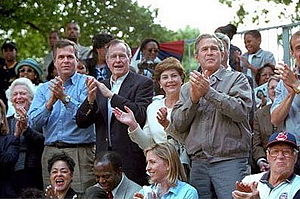 Connections to other prominent families 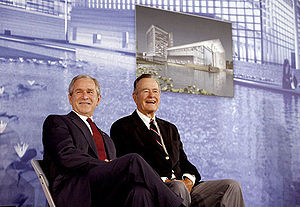 George Herbert "Bert" Walker (1875–1953) was a wealthy American banker and businessman. His daughter Dorothy married Prescott Bush, making him the grandfather of the 41st President George H. W. Bush and the great-grandfather of the 43rd President and George W. Bush. He is also the namesake of the Walker Cup, a men's amateur golf trophy contested in odd-numbered years between a U.S. team and a combined Great Britain and Ireland side.

The Livingston family, a prominent family which migrated from Scotland to New York (then New Netherlands) in the 17th century, whose descendants include signers of the United States Declaration of Independence (Philip Livingston) and the United States Constitution (William Livingston), Lords of Livingston Manor and Clermont Manor, located along the Hudson River in 18th-century eastern New York, First Lady of the United States Eleanor Roosevelt, Congressman Bob Livingston of Louisiana, much of the wealthy Astor family, New York Governor Hamilton Fish, and actors Montgomery Clift, and Jane Wyatt. Flora Sheldon, wife of Samuel P. Bush, was a Livingston.

The Schuyler family, a prominent family which migrated from the Netherlands to New York (then New Netherlands) in the 17th century around Albany, NY. Descendants include much of the Livingston family, General Philip Schuyler during the American Revolution, Cornplanter, a Seneca Chief who fought on the side of the British during the American Revolution, David Mathews, Mayor of New York City during British occupation, Major General Schuyler Hamilton, a grandson of Alexander Hamilton, and members of the political Kean family which includes Thomas Kean and Thomas Kean Jr..