From Infogalactic: the planetary knowledge core
Jump to: navigation, search
For other uses, see Buttermilk (disambiguation). 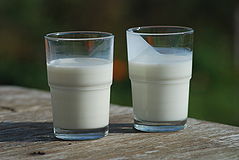 Buttermilk refers to a number of dairy drinks. Originally, buttermilk was the liquid left behind after churning butter out of cream. This type of buttermilk is known as traditional buttermilk.

The term buttermilk also refers to a range of fermented milk drinks, common in warm climates (e.g., the Balkans, the Middle East, Turkey, Afghanistan, Pakistan, Nepal, India, Sri Lanka, Nicaragua and the Southern United States) where unrefrigerated fresh milk sours quickly,[1] as well as in colder climates, such as Scandinavia, Ireland, Netherlands, Germany, Poland, Slovakia, Slovenia, Croatia and the Czech Republic. This fermented dairy product known as cultured buttermilk is produced from cow's milk and has a characteristically sour taste caused by lactic acid bacteria. This variant is made using one of two species of bacteria—either Lactococcus lactis or Lactobacillus bulgaricus, which creates more tartness.

Buttermilk can be drunk straight, and it can also be used in cooking. Soda bread is a bread in which the acid in buttermilk reacts with the rising agent, sodium bicarbonate, to produce carbon dioxide which acts as the leavening agent.

Originally, buttermilk referred to the liquid left over from churning butter from cultured or fermented cream. Traditionally, before cream could be skimmed from whole milk, the milk was left to sit for a period of time to allow the cream and milk to separate. During this time, naturally occurring lactic acid-producing bacteria in the milk fermented it. This facilitates the butter churning process, since fat from cream with a lower pH coalesces more readily than that of fresh cream. The acidic environment also helps prevent potentially harmful microorganisms from growing, increasing shelf-life.[3] However, in establishments that used cream separators, the cream was hardly acidic at all.

On the Indian subcontinent, the term "buttermilk" refers to the liquid left over after extracting butter from churned cream. Today, this is called traditional buttermilk. Traditional buttermilk is still common in many Nepalese, Indian and Pakistani households but rarely found in western countries.[2] In Southern India and most areas of the Punjab, Saurashtra (Gujarat), buttermilk with added water, sugar or salt, asafoetida, and curry leaves is a must-have in daily food while also given at stalls in festival times.

Buttermilk prepared in the traditional way is considered beneficial to health as it contains probiotic microbes and is sometimes referred to as "Grandma's probiotic".[1] It is also soothing to stomach and skin.[1] The fat content of buttermilk is far lower than that of milk or curd as fat is removed during churning. The probiotic nature of buttermilk is purported to be beneficial to the gut and improve immunity when taken regularly.[4] One cup of whole milk contains 157 calories and 8.9 grams of fat whereas one cup of buttermilk contains 99 calories and 2.2 grams of fat.[5] Buttermilk contains vitamins, potassium, calcium, and traces of phosphorus.[4] In some countries, such as India, it is a favourite traditional drink during summer as it is soothing to the stomach and alleviates minor stomach upsets.[4] In India, flavoring ingredients such as asafoetida, coriander leaves, ginger, curry leaves and sea salt are mixed with buttermilk to enhance its digestion-aiding properties.[4]

Commercially available cultured buttermilk is milk that has been pasteurized and homogenized (with 1% or 2% fat), and then inoculated with a culture of Lactococcus lactis (formerly known as Streptococcus lactis) plus Leuconostoc citrovorum to simulate the naturally occurring bacteria in the old-fashioned product. Some dairies add colored flecks of butter to cultured buttermilk to simulate residual flecks of butter that can be left over from the churning process of traditional buttermilk.[2]

Condensed buttermilk and dried buttermilk have increased in importance in the food industry.[6] Buttermilk solids are used in ice cream manufacture,[7] as well as being added to pancake mixes. Adding specific strains of bacteria to pasteurized milk allows more consistent production.

In the early 1900s, cultured buttermilk was labeled artificial buttermilk, to differentiate it from traditional buttermilk, which was known as natural or ordinary buttermilk.[8][not in citation given]

Acidified buttermilk is a related product made by adding a food-grade acid (such as lemon juice) to milk.[9] It can be produced by mixing 1 tablespoon of vinegar or lemon juice with 1 cup of milk and letting it sit until it curdles, about 10 minutes. Any level of fat content for the milk ingredient may be used, but whole milk is usually used for baking. In the process which is used to produce paneer such acidification is done in the presence of heat.

Like powdered milk, buttermilk is available in a dried powder form. This stores well at room temperature and is usually used in baked goods.[citation needed]